“Devil in the Dollhouse” by Richard Kadrey (Voyager) 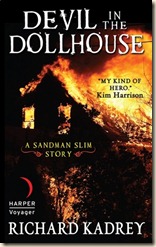 James Stark, a.k.a. Sandman Slim, has a new job, but being the new Lucifer in town gives fresh meaning to the word “Hell”. Especially when he hears of hideous massacres near a haunted fortress out on Hell’s frontier. As far as Stark’s concerned, the more dead Hellions, the better, but he still has to prove that no one screws with Sandman Slim. And facing creatures so terrible even Hell does not want them is no cakewalk, even for Lucifer.

It should be no surprise by this point that I’m a fan of Kadrey’s Sandman Slim novels, having reviewed the first three novels of the series in quick succession. Devil in the Dollhouse is a stop-gap short story that was released before the now-published fourth novel, Devil Said Bang. Unsurprisingly, this is a short, sharp taste of Kadrey’s take on the eternal battle between Heaven, Hell and the humans caught in the middle. Superb.

[Warning: Minor spoilers for the first three Sandman Slim series follow, but I have kept them to an absolute minimum and referencing bigger-picture things, rather than specifics.]

Devil in the Dollhouse includes some nice mentions and refresher-statements for past events from books one through three. So, if you wanted to jump into the series for a short taster, then this could suffice. I do, however, think you should still start with Sandman Slim, as it’s so damned good, and a lot happens in the first three novels. I said it then, I’ll say it again: this is urban and supernatural fantasy as I always wanted it to be. Long may the series continue!

There are a number of interesting revelations in this short story, but given its length to go into much detail would just spoil everything. Nevertheless, Stark has been informed by two of his servants that he must go on a quest. It is a quest, they tell him, that he must complete in order to “become what destiny has led [him] to… To become the Lord of the Underworld.” You see, it turns out that “Not all of Hell is willing to accept a mortal as Lucifer.” Reluctantly, and because he’d really like to not be murdered during his – hopefully – short tenure as Lucifer, Stark gives in.

“What kind of quest are we talking about?”

“It’s really more of an exorcism. Not much more than clearing out a haunted house.”

“With a coterie of unpleasant residents doing mischief with travelers.”

This is not at all what he had in mind. Since the old Lucifer, now going by Samael back in Heaven, left this particular quest undone, it falls to Stark to clean up the mess. Hopefully. On the way, we learn of the “first Lucifer”, the first version of Hell, and we’re exposed to a whole lot of evil shit. Naturally. It appears as though “Lucifer” may be a title akin to “Caesar” (that’s all I’m telling you, so just read the story to get what I’m talking about).

“The early days after the fall were hard. Some didn’t survive the fall itself. Others went mad. There were murders and suicides. Lord Lucifer, Samael, gathered the fallen and just as in Heaven, he became our leader. He urged us to build and create our own civilization. One to rival even Heaven. He saved us. Still, with all that, there were some who refused to follow… I’m sure they told themselves they had reasons, but it was really simple greed. Some had escaped Heaven with weapons and riches. Enough, they thought, to mount a new war.”

Kadrey paints a picture of a strange, weird and horrific Hell. (River of shit and blood, anyone?) Hell is also oh-so-very human: “Give people what they want.” This is not surprisingly, really, as it is meant to embody all of our worst traits. The story is filled with lots of witty dialogue and plenty of fun observations in Kadrey’s inimitable style.

“It’s quicker down the hill than it was up. Not running for your life through an army of brainless Hellion zombies will do that.”

I really like the way Kadrey reinvents aspects of his world, his Heaven and Hell, with each new book. Where some authors may fumble this sort of reinvention, making it seem like little more than lazy ret-conning, Kadrey pulls it off with dark and twisted aplomb. It is as though Stark and the reader are peeling back a new layer of this reality’s onion. There are lies upon lies, misdirection upon misdirection. It makes for an endlessly inventive and twisty series. Quite brilliant.

Devil in the Dollhouse finishes with a great ending. It’s a bit tragic, too, in its way, and I’m looking forward to seeing how it’ll affect future novels in the series.

Very highly recommended, this is a must for fans of the series.