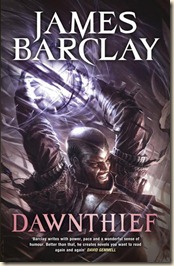 The Chronicles of the Raven Begin

The Raven have fought together for years, six men carving out a living as swords for hire in the war that has torn Balaia apart, loyal only to themselves and their code. But when they agree to escort a Xesteskian mage on a secret mission they are pulled into a world of politics and ancients secrets. For the first time The Raven cannot trust even their own strength and prowess, for the first time their code is in doubt. How is it that they are fighting for one of the most evil colleges of magic known? Searching for the secret location of Dawnthief; a spell that could end the world? Aiming not to destroy it but to cast it…

It took me a rather long time to get around to reading Dawnthief. There’s no particular reason for this oversight, but for the longest time, The Chronicles of the Raven has been a series I’ve always wanted to try. With my New Year’s Resolution to finally get around to four particular fantasy series, I thought there was no better time. I’m glad I did, too. The book, while flawed and suffering from a number of rookie issues, is nevertheless addictive. I’ll certainly be reading more of the series. This was, given the pacing and events of the first third of the book, a tricky review to write.

Dawnthief drops readers right into the action, as the Raven defend a castle from an invading force. The pace of these early scenes barely lets up for a couple of chapters, and it’s quite the whirlwind. To be honest, it was a little disorientating, as I had no context for the characters we were meeting or action taking place, and yet so much seems to happen with little explanation. I’ll admit I was pretty tired when I first started reading Dawnthief, so this surely affected my ability to orient myself. That being said, I quickly felt I came to know the characters, and started to enjoy their company quite a bit.

The Raven: the greatest mercenary band on Balaia, highly sought-after due to their superb record and reputation. At one point, early in the novel, shortly after the Raven are hired by the Xeteskian mage Denser, we get the explanation for why they are so sought after. Specifically, it boils down to their simple code:

“While killing was legal within the rules of battle, and in witnessed defence of self and others, outside of these boundaries it was murder. And The Raven, perhaps alone, had stood in battle lines for ten years with robbers, bandits, bounty hunters and other hired men little better than murderers, with their collective conscience clear. There were plenty who said it was the total adherence to their code that made them strong and feared by opponents; and Denser had no doubt that the perpetuation of this myth helped them enormously. Mainly, though, he considered it was because while as individuals they were outstanding, if not brilliant, as a team they were simply awesome.”

Unbeknownst to Denser, the Raven are not in a good place at the time of their acquaintance. Following the messy job that introduces them, during which Denser is actually working at cross-purposes, we learn that certain members of the team have been considering packing it all in. For some, this is understandable – they’ve got rich working as part of the Raven, and have lives and dreams they want to pursue outside of warfare. For others, particularly characters like Hirad the Barbarian, all they know is war, and they think that’s all their life will be until they are cut down in battle. At one point, the elf mage Ilkar simply states, “we’re getting too old to fight,” and argues that they are starting to lose their edge. Hirad, who is second-in-command (of sorts), scoffs at the idea, still very much enjoying the life of a mercenary. Luckily for Denser, however, the vast amounts of wealth he can offer as recompense for what would begin as a simple escort job sways the team into accepting one last job. Naturally, the more time they spend with Denser, the job just spirals completely out of the Raven’s control, and takes on an apocalyptic caste. They are sucked in, and not all goes in their favour.

I thought Barclay did a great job writing the characters, particularly the banter and camaraderie between the members of the Raven. The dynamic between them is really good and interesting, and I particularly liked the fact that they are thinking of packing it in (at just 33-years-old...). We certainly get the sense that they are comfortable with each other. That being said, there are some reactions – for example, to particular deaths – that seemed odd or imbalanced: for one early on, intense grieving, but for another perhaps more momentous death, they get over it pretty quickly.

I also really struggled t0 get to grips with Erienne: she goes through some truly tragic events over the course of the novel, it’s true, but I thought she was very inconsistent, petulant, and in some scenes melodramatic. Then, despite her incredible dismay at the collapse of, basically, her entire life, she decides that Denser’s “seed” is her only hope… Maybe I missed something along the way, but I really felt her desire for Denser came completely out of nowhere. She is probably the weakest link in the novel, sadly. She had a lot of potential, but I don’t think it was ever realised.

Selyn, on the other hand, was very intriguing and well-written – for the short amount of novel we get to spend time with her (pity she didn’t feature more).

I already mentioned that not everything goes well for the Raven during Dawnthief. In some ways, one could look at this novel as a reverse-Fellowship of the Ring, in that the group is already well-established, and instead of growing as the novel progresses, it actually… dwindles. This is an incredibly bloody novel, and no characters seems to be safe from tragedy or worse.

Speaking of characters, and in an attempt to highlight something awesome without spoiling it: Sol. Did not expect the truth about who/what he is. A genius, tragic bit of storytelling.

As I mentioned, the narrative just drops reader right into the story. Barclay doesn’t offer much pre-amble for his various groups of characters, which is not necessarily a bad thing. The background, world-building and context are given to us gradually, slowly filling in our wider perspective of the world. This does mean, however, that sometimes I was left wondering why something was important or necessary to describe in detail. Sometimes, the exposition felt a little clunky (it’s amazing how much Ilkar needs to explain to Hirad, despite them fighting together for ten years, for example), but for the main it was interesting enough to keep me reading and fascinated by the world Barclay’s created.

The military-disposition planning scenes, late in the novel, went on altogether too long. None of the names and places felt relevant, and later they just distracted from what the Raven were getting up to. In some ways, Dawnthief felt as though it had been written in a manner that assumed readers would figure out the world in our own sweet time, or we could just look at the (rather nice) map at the front to get our bearings. This wasn’t really a problem, but some readers may not like the sense of being adrift in an entirely new world without a guide.

The story’s momentum builds steadily after we moved past the first third of the book. Events start coming together, the action and story started to flow better, and by this point I felt more comfortable with the characters. Dawnthief seems to be one of those novels that requires carving out good blocks of reading time, as I don’t think it’s one that should be dipped into for a few minutes here-or-there. If you do this, as I did, you’ll find yourself flying through the book when you can give it a decent amount of time and attention.

The body-count in this first novel is staggering. Given that it is the first in a series, though, and because some of the deaths occur very early on, their deaths lack the impact of, say, a death that happens in the first pages of a second or third book – we just don’t know the characters well enough to feel the loss. (A good example of this done right would be Mark Charan Newton’s City of Ruin: at the beginning, a particular character I liked is happily walking along having a civilized chat, when BAM! Arrow in the eye...)

In many ways, you can see Barclay’s love of classic fantasy and, I believe, fantasy RPGs. Dawnthief is filled with talk of mana, mercenaries, bickering Magic Colleges, demonic familiars, Wytch Lords, alternate dimensions, dragons, and so many more classic fantasy tropes. All of them are lovingly incorporated into the story. It’s not always seamless, but there are also a few great reinterpretations of these standards. It also has the George R.R. Martin/Joe Abercrombie-esque tougher skin: People die. Important people. People you will grow to like. There is a lot of blood.

Dawnthief ends with a nice, big finish, as the Raven come to the end of their long, bloody road, and Denser must fulfill the role of a lifetime. It’s nicely done, actually, and I particularly liked the Raven’s last scenes in the book. However, I must admit that I was far less interested in the grand battle taking place while the Raven were fulfilling their contract – after so long spent fleshing these characters out, it felt strange to leave them for much of the final third of the book. That being said, the Xeteskian lord was pretty badass…

So, in summation: Dawnthief is a flawed debut, but it gave me a glimpse of something I think will improve with time. With seven more novels in the Chronicles of the Raven and Legends of the Raven, I’m glad I have the chance to see if my faith is founded. This novel is certainly worth a look, but I would caution readers to stick with it through the first third – it gets much better, and the reward is worthwhile. A cautious recommendation, then.

Elves Series (prequel): Once Walked With Gods, Rise of the TaiGethen, Beyond the Mists of Katura (forthcoming)