Upcoming: “Before the Fall” by Francis Knight (Orbit) 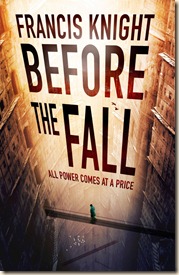 I loved the first novel in Knight’s Rojan Dizon series, Fade to Black. I thought it was a fun, well-written and fast-paced fantasy thriller, in a very well-realised world. I have, therefore, been keeping my eyes open for more information about its soon-to-be-released sequel, Before the Fall. I’ve posted the artwork before, but was waiting on a synopsis. Which I now have. So here it is:

With the destruction of their main power source, the towering vertical city of Mahala is in crisis.

Downsiders are verging on a riot, and the mage Rojan Dizon is just trying to keep his head down and some power back to the city — whilst staying hopeful that he won’t get executed for using his magic. Then things go from bad to worse when a Downsider and emerging mage is found murdered. It’s a crime that divides all sides, and the result is mayhem.

But Rojan’s worst nightmare is just around the corner. When he discovers the killer’s identity, he’s either going to be responsible for all-out anarchy, or for a war with Mahala’s neighboring countries that no one is prepared for.

Before the Fall will be published by Orbit in both the UK and US on June 18, 2013 (in paperback and eBook editions).