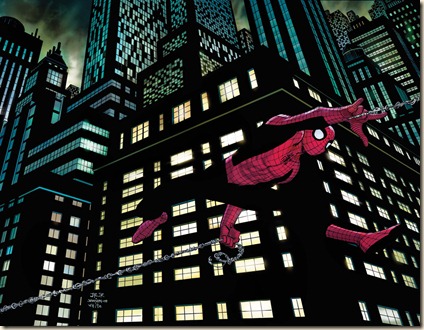 The return of Doctor Octopus, Daredevil, a wedding you never predicted, and the return of one of the most important people in Peter Parker’s life. Doc’s back in town, but it’s only a prelude to darker days ahead as Spidey unknowingly prepares for a gauntlet he can’t predict. Also, several short features showcase some rarely-explored aspects of both Spidey and Peter’s life. And, finally, the second most important wedding day of Peter Parker’s life.

The book is rather uneven. It’s bitty, highly episodic, and the tone veers all over the place, dependent on the writer. The humour works at times, but at others it feels like it is trying so hard, it’s difficult to like it at all (imagine the quippiness of Gilmore Girls, but with a wall-crawling super-hero). It took longer than I expected to read all of this, as I just couldn’t get sucked in. It is not, however, without its moments. Thankfully, the book improved, once we got beyond the first, mammoth issue.

First up, let me just deal with the “Spider-Man Covers You’ll Never See!” features, which are sprinkled throughout the book. They’re crap, and pointless. Moving on… 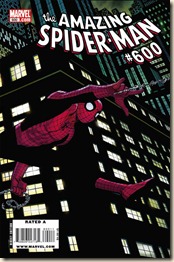 Issue #600 of Amazing Spider-Man is 101 pages long, including the cover and back-matter/extras (I was reading this via the comiXology app), and man did it drag at times. I’m not wholly new to Spider-Man or the characters that surround him. I’ve read a number of issues from all over the series chronology, as well as other Spidey series. So I wasn’t exactly lost while reading this, but there were times when I just wondered why the hell I should care at all.

In this story, Spidey’s incessant quipping was frankly exhausting. Maybe 10% of the comments, retorts and jokes were enough to raise a smile. That is certainly not a success rate that one might expect from such a popular series. Doctor Octopus is a complete cartoon, and his dialogue is just awful and cliché, and had me cringing on almost every page. I was very disappointed. The story dragged, the wedding stuff preparations and Spidey’s ongoing conflict with Mayor Jameson were simply tedious. I’ve read some later Spider-Man stuff written by Slott, and it’s clear to me that he got much better over time, as he became more comfortable with the characters. Given what I know about Superior Spider-Man, and the end of Amazing Spider-Man (issue #700), I can see some foreshadowing. 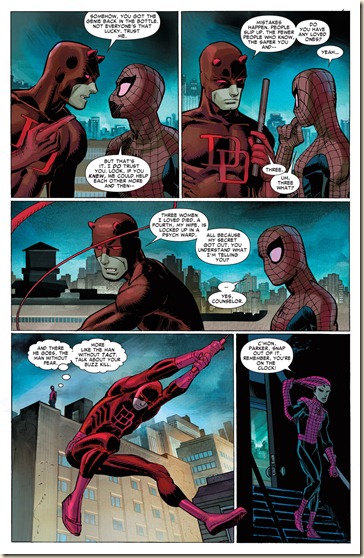 In this first back-up-style story, Spidey has visited a shrink. He reflects on his many, many years of adventures. The writing was a little weak, but the premise was strong: Spider-Man basically goes through all the (very) weird events and experiences that have happened over the course of the 600 issues of the series to this point. There’s a nice, knowing nod and a wink regarding the comics industry’s tendency to upend the lives of their various characters, not to mention ret-conning, poor artistic and narrative decisions, and other things like that. It was amusing, but I do think it could have been better, if written by someone else.

This short tale is told from the perspective of Uncle Ben. He’s reflecting on his insecurities about raising Peter, after the death of his father. We see how much he worries about his nephew, how much he misses his brother. It builds nicely, and eventually Ben and Peter confront his concerns. It’s calm, not at all melodramatic. And it is actually a wonderful, moving story. Superb.

“IF I WAS SPIDER-MAN”

This story has slightly rougher artwork than the previous stories, but it is a fun story of kids philosophizing (as they are wont to do) about how they would “be” Spider-Man, if they got the chance. They go through all of the things that would be so cool, and the ways in which they’d use their powers for celebrity and other selfish purposes. But then move on to the concerns they have.

“It’s just WRONG -- that Spider-Man is cool, but BEING Spider-Man isn’t cool. That’s, like, so totally messed up.”

Tell me about it, thinks Peter Parker, as he wanders past…

Aunt May, pre-wedding to Jameson Snr., is visiting Uncle Ben’s grave. She talks to him, going over her various fears, her worry that she might appear to be replacing Ben. It’s a short diversion. Sweet story, interesting art style, but thin and ruined by a silly, schmaltzy ending.

“FIGHT AT THE MUSEUM”

Wells is also the author of the first few issues of the awesome Avenging Spider-Man. However, this is just another quick jolt of making fun of past bad decisions (the Spider Mobile, in this case). It’s fine, but too short to really do anything beyond make long-time fans chuckle. (In itself, no bad thing, it’s true.)

This was a very dark and very cool short: it’s clearly a prologue, of sorts, for “The Gauntlet” storyline, which ran from #6??-#6?? (and was collected into five books). I’m quite intrigued by this upcoming story, now, I must say. I had been cool on this whole series (despite picking up the first two collections from #600) at this point, but this short certainly made me sit up and take note. 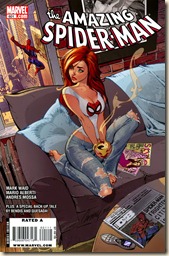 Which brings us, after waaay too long, to issue #601. This one features a famous cover – of Mary Jane Watson, sitting suggestively on the couch, breasts pressed together, as Spidey swings off out the window. I have a feeling someone recreated this at some point, perhaps the guy behind Collectors…?

This issue finally picks up the main story from the end of #600. Mary Jane Watson has returned to New York, which has distracted Peter no end. It kicks off the morning after the wedding, with Peter waking up, very hung-over. He turns over, and sees a woman in his bed, who he believes is MJ. Unfortunately for Peter, it’s not his former flame. Michelle (his not-exactly-platonic-anymore roommate) is especially pissed after Peter calls her “MJ”. Naturally: “You’re the reason there’s a waiting period on handguns!” she screams at him. 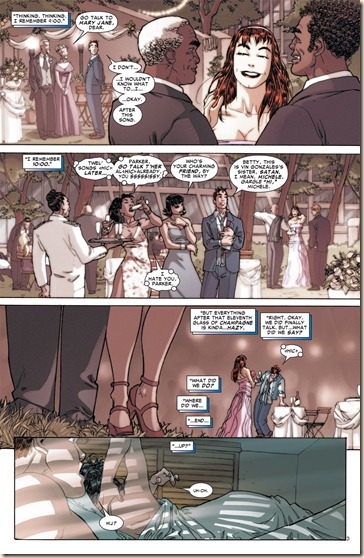 The issue had a lot of talk about economic downturn and hard economic and employment times (the issue was published in 2010, so that’s not surprising).

“THE BEST VERSION OF MYSELF”

This was another pretty cool back-up story: Spidey drops in on Luke Cage’s wife, Jessica Jones, and their baby daughter (she used to be a super-hero, apparently). They talk about Jones’s memories of the first time she ever saw Spider-Man, and how much of an impact it had on her own career as a super-powered-person. Spider-Man convinces her that the best way for her to instill the idea of “With great power comes great responsibility” is to show her the best side of herself, rather than to just tell her. (This story continues in New Avengers, apparently.) 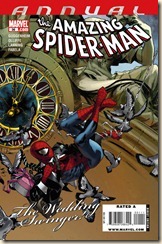 The whole Parker and Jameson wedding party has schlepped up to Boston for a special dinner. This, sadly, meant that a lot of the issue was written in a “Bahstin” accent. Rookie, bad writer mistake. It was fine for one or two speech bubbles, but after that, it quickly got old and annoying (not to mention inconsistent). Mid-way through the dinner, some crazy dude called “Raptor” interrupts Peter in the bathroom (uncool), and just starts wailing on him. It turns out, Raptor believes Peter is Ben Reilly – Peter’s clone from a long-running Spider-Man story-arc, The Ben Reilly Epic. There’s more to come from this story, later in the series, and I’ll be interested to see how it unfolds. 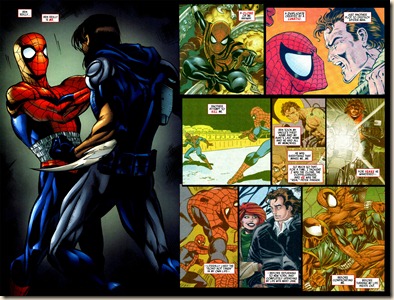 I think the annual should have been placed at the start of the book: chronologically, it would’ve made far more sense, being set before the wedding. It’s not a bad way to finish a book, though. Despite the “Bahstin” accents…

So, overall, this book is very hit-and-miss. It’s long, but the first issue makes it feel so much longer. There are moments of excellent story-telling; but there are also swathes of dull, drawn-out and boring sections. If you want to start on Amazing Spider-Man, then there may be a better point either earlier or later in the series. I’ll be investigating later collections (I have already read the follow up to this book, Red-Headed Stranger), so I might be able to give new readers a suggestion for a better starting-point.