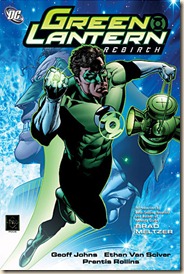 Hal Jordan was considered the greatest Green Lantern of them all. But Jordan lost control, allowed himself to be corrupted and transformed into the villainous Parallax. Later, Jordan reappeared and made the ultimate sacrifice – a sacrifice that allowed him to become the Spectre, the Wrath of God. After several years of activity on Earth, The Spectre became restless and sought a way to prove himself worthy of that noble reputation. See how a man born without fear and seeking to rebuild his life, puts cosmic forces into motion that will have repercussions not only on Earth but across the universe.

Green Lantern: Rebirth is the book that re-booted the franchise and character pre-New 52. Penned by Geoff Johns (who is fast becoming one of my favourite comic authors), it explains how Hal Jordan, who killed himself while possessed by the malevolent entity Parallax, comes back to life. As super-heroes are so very wont to do. It’s not a bad place to start, but this could be because I’ve read other Green Lantern books and series, not to mention later chapters in Johns’s run (don’t ask why, but I’m reading it entirely out of order).

So, as this book begins, there’s a lot of new and weird shit going on. First off, Hal Jordan is no longer the being Parallax. Instead, he appears to have become the Spectre, an incredibly powerful being created (maybe by a god) to go around the DC Universe meting out justice. Secondly, one of Earth’s other Lanterns (there are four), Guy Gardner is some kind of alien-shape-changer-hybrid, and no longer in the Green Lantern Corps. He is still on good terms with another Earth Lantern, John Stewart. Kyle Rayner, the fourth, final, and youngest human Lantern, who we meet in the first pages as he crash-lands back on on Earth, is oddly absent for a lot of this book. 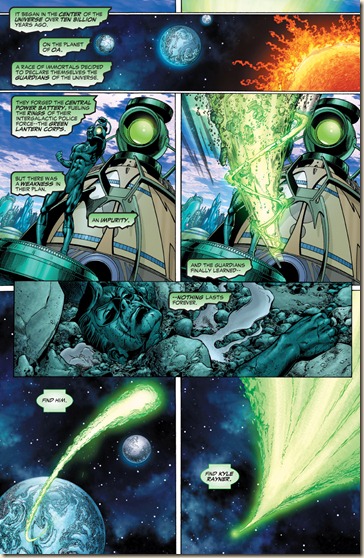 The first chapter is very focused on scene setting, for which I was grateful. The Justice League make an appearance, as they try to figure out what’s going on: Gardner appears to have gone biologically nova – he unwittingly unleashed a massive power blast that destroys a Green Lantern-themed bar (a bit tacky, but there we go), and seems to have lost control of his shape-changing abilities. It’s a big mess. There are signs of Jordan returning, and not in a good way, as many of his former colleagues in the Lantern Corps and also the Justice League only see him now as the Spectre. Batman, on the other hand, is highly suspicious. As he is wont to be. 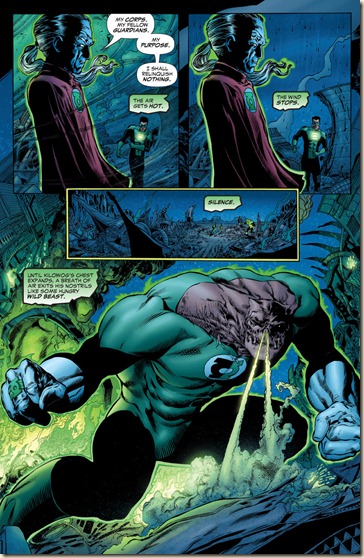 We learn more of Hal’s powers as the Spectre, when the Justice League confront him after he fixes the old, dilapidated airfield where he learned to fly, where his dad died, and where he met Carol. But then the other Lanterns start going nuts – Stewart attacks the Justice League members, and then Guy Gardner gets his ring back and then he, too, goes mental and starts attacking everybody.

The third chapter finally gives me the catch-up I’d been waiting for; as we get a very good history of Parallax, the Guardians’ battle with him (it?), and also the nature and cause of the “yellow impurity” that has a strange, detrimental impact on the Corps: they have a weakness against the color yellow… (This made me snort. I think it’s daft, and I can’t see how they managed to get this past the editors way back when. At least now, though, they have a decent explanation…) 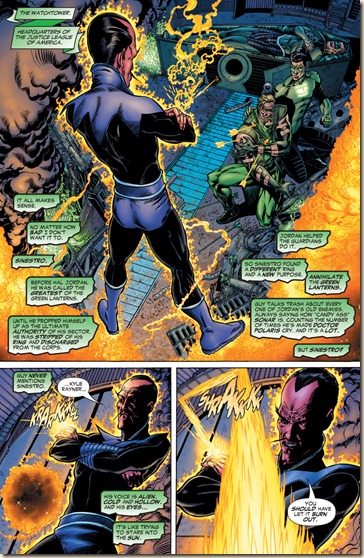 Then, of course, everything come to a gigantic battle-crazy climax, as revelations are had and surprises dealt out. Sinestro enters the mix, and things get even crazier and more brutal. I think I preferred the second half of this book, but I do see why Johns took the approach he did. I have a feeling that, had I read this issue-by-issue as released, rather than in one go, I may not have continued with it all the way. So yes, the final half of Green Lantern: Rebirth saves the book from leaving me completely lost and disappointed. It was still more all-star than I would like (why does the Justice League have to appear all the damned time?). I enjoyed the portrayal of Batman, as a suspicious… well, dickhead. And the pathetic fallacy of having him portrayed as always deep in-shadow was nicely done.

If you want to delve back into the pre-New 52 relaunch, then this is a book that could help. But, at the same time, maybe starting with Volume 1, “No Fear”, would be enough?

(I have already read “No Fear”, and I can say that both would have worked as starting points for me – with, again, the caveat that I’m not entirely new to the setting and characters.)

Posted by Civilian Reader at 5:37 PM