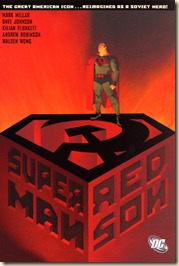 Strange visitor from another world who can change the course of mighty rivers, bend steel in his bare hands... and who, as the champion of the common worker, fights a never-ending battle for Stalin, Socialism, and the international expansion of the Warsaw Pact.

In this Elseworlds tale, a familiar rocketship crash-lands on Earth carrying an infant who will one day become the most powerful being on the planet. But his ship doesn't land in America. He is not raised in Smallville, Kansas. Instead, he makes his new home on a collective in the Soviet Union!

A friend of mine at university had a copy of this, but I never got around to borrowing it. I thought it had a pretty interesting premise (despite my general aversion to alternate reality/multiple dimension comics). Another series that was included in the “Superman 101” sale on ComiXology a little while back (three issues, 99ȼ each), I’m glad I finally got around to it. I’ve managed to read some more of Millar’s work, which I quite liked, and decided it was time to give Red Son a try. I am left with mixed feelings about this mini-series, as it is part great, part run-of-the-mill, and part underwhelming.

[Be warned: There is a particular SPOILER in this review that may annoy people. Just so you know… It irritated me so much, I couldn’t leave it out of the review.]

What if Superman had crash-landed behind the Iron Curtain, and been brought up by a couple on a Soviet Commune? How might this have affected his development and ultimate trajectory? These are questions Millar and Co. ask in Red Son. 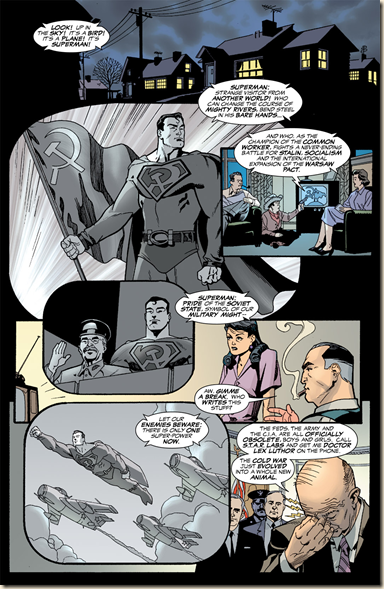 It’s an intriguing take on the Superman origin mythology, and as a whole, I think he’s done a really good job of writing a convincing alternative storyline. Superman is feted by the Stalin’s regime, taken in and groomed to be the next Soviet President, much to the resentment of other power-players and, especially Stalin’s illegitimate son. Superman, to begin with, does not want the power and fame and attention, but soon realizes (much like Skynet and the central computer in I, Robot) that the biggest threat to humanity and World Peace is… well, humans left to run amok. So, Superman ends up implementing a fascistic, totalitarian and oppressive regime of his own (although, unlike real-life totalitarian states, everyone is employed, nobody goes hungry or homeless). There are, however, sinister brainwashing programs for those who refuse to see the light, if you will. The Soviet system is still rife with internal struggle, but rather than mere jealous, greed and ambition, it is exacerbated by severe inferiority complexes as those who wish to helm the new Soviet Empire compare themselves to Superman and find themselves… well, too human, and therefore utterly wanting.

While all of this is going on, the United States is in an absolute panic about this indestructible Soviet Superman, and they end up pouring billions of dollars into every crackpot scheme that could put a stop to Superman, should he threaten America. The desire to counter his power is all-consuming for Lex Luthor, which puts his marriage to Lois Lane, now Lois Luthor, in jeopardy (not that he gives much indication of caring about this).

One of the first things that really stood out for me, other than the genuinely interesting and innovative re-imagining and relocation of the Superman origin story, was just how much Lex Luthor irritated me. His dialogue was a constant litany of how intelligent and awesome he is, and how inferior he finds other people. 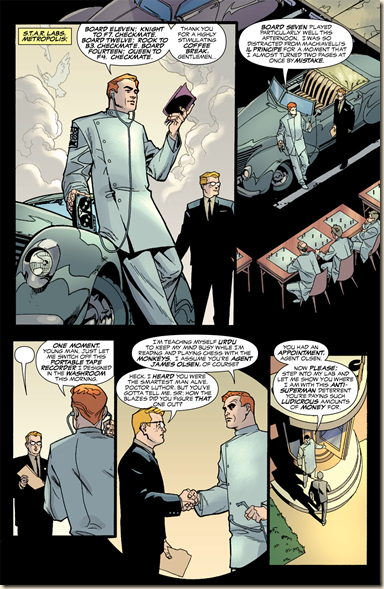 Fine, I know we’re not supposed to like him or feel much empathy for him, if any at all. But almost all of it was cliché: multiple chess games with grand-masters (why do supposed geniuses always play so much chess in literature and especially comic books?), reading multiple books per day (not a sign of genius, rather a sign of reading speed), and a number of other “Hyper-Intelligent Indicators” or whatever you want to call them. At least Millar recognizes this later in the story, when Lois calls him on it. By that point, though, it felt a little too late to make a knowing comment about it.

I enjoyed the version of Batman we get in Red Son. He is also Russian, and I thought he was probably the most interesting character in the book. His new origin story is a nice mirror to the better-known, Gotham-born Batman, while also being completely believable and very different. 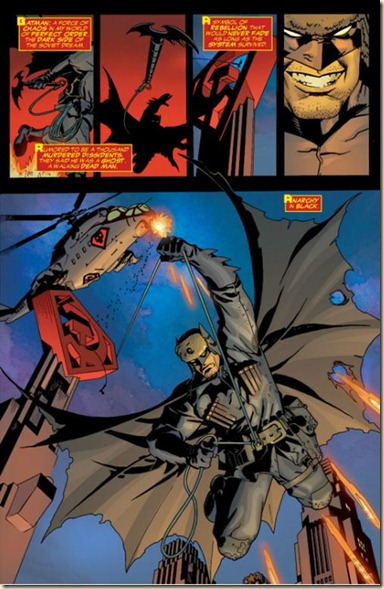 Each issue is set in a different time period, and I really liked the way each issue is presented in a slightly different art style. They become ever-so-slightly-more “modern” as time advances. Only slightly, so it wasn’t completely obvious as I read through it. It’s certainly a very nice touch, and pulled off with great skill and style.

In the second issue, Superman has ascended to the Presidency of Russia, and has basically become the ruler of the whole world, save the United States. Which is in chaos and severe decline. Millar manages to get in some commentary on the state of America in this reality (though anyone familiar with newspapers will see the relevance to the real world, too), as well as American capitalism as a whole. 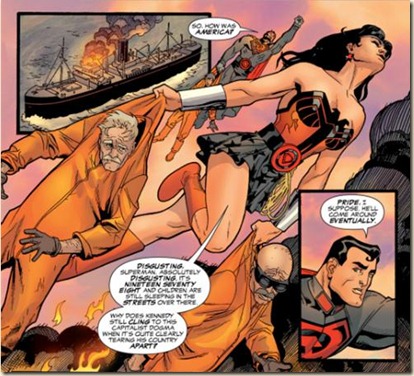 In addition, Lex Luthor as a whole is kind of crap: I know, we’re not meant to like him, but seriously. I don’t think I’ve ever read a more cliché “Douchey-Mega-Intellect” character.

Ok, this is the spoiler I mentioned at the start, which really pissed me off. After decades of time and billions of dollars spent by the US government and Lex Luthor in developing a way to confront and combat the Soviet Superman, Luthor ultimately defeats the fascist, totalitarian and inflexible super-human conqueror of the world by… writing a single sentence?! Oh please. If that’s all it took, why did Lex not just send it to him on a postcard years ago? I’ve never felt so cheated by a narrative device in a comic, or in any fictional medium.

The writing was a little simplistic at times, but there are nevertheless plenty of great innovations and interpretations of Batman (below), Wonder Woman, Green Lantern, Lois Lane, and so forth, to keep things interesting. No doubt there will be many knowing nods and recognition for long-time Superman readers.

But, despite these flashes of imaginative innovation, Red Son ultimately falls short of my expectations. As well as the ridiculous Luthor-penmanship-saves-the-day denouement, another area the book suffers in general is the dialogue: at times, it just isn’t as realistic as I would expect or want.

The first ending (after the all-powerful-penmanship) was a let-down: it was so full of exaggeration that it was just irritating. The story then continued for a little bit in a somewhat interesting, circular narrative, thereby managing to rescue the book a little bit before I turned the final page. (Sorry, I know that’s vague, but trust me.)

Overall? This is an interesting concept that fell down upon execution. Which makes me think of Grant Morrison.

I would not say this is essential reading. 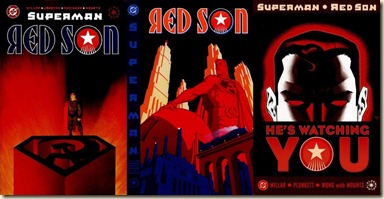