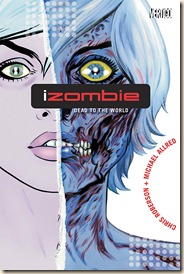 Gwendolyn “Gwen” Dylan is a 20-something gravedigger in an eco-friendly cemetery. Once a month she must eat a human brain to keep from losing her memories, but in the process she becomes consumed with the thoughts and personality of the dead person – until she eats her next brain. She sets out to fulfill the dead person’s last request, solve a crime or right a wrong. Our zombie girl detective is joined by a radical supporting cast: her best friend Eleanor, who happens to be a swinging ’60s ghost, a posse of paintball blasting vampires, a smitten were-dog and a hot but demented mummy.

I’d heard a lot of good things about iZombie before I read it, and when I was in my local library, I saw they had this first volume. Not one to pass up a chance to read something new, I borrowed it, and actually really enjoyed it. It wasn’t quite what I was expecting, either. This is quite fun.

This is an interesting story of a female zombie just trying to get by in modern Eugene, Oregon. She’s best friends with a ghost and a were-terrier (one of the best supernatural inventions of recent times, I think). 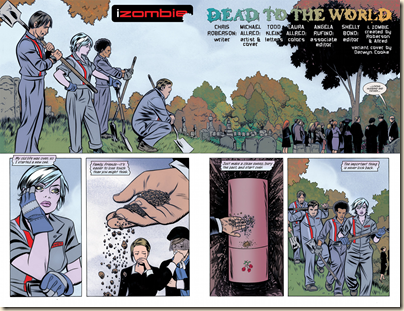 Gwen works as a gravedigger: she digs them, fills them, and once a month digs one open again for a brain to nosh on. This is supposed to keep the shuffling, slavering mindlessness at bay. (Although, we’re never told how she knows this…) 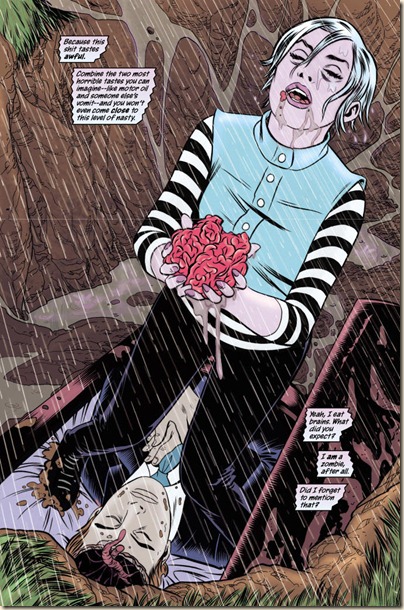 One of my favourite comic pages 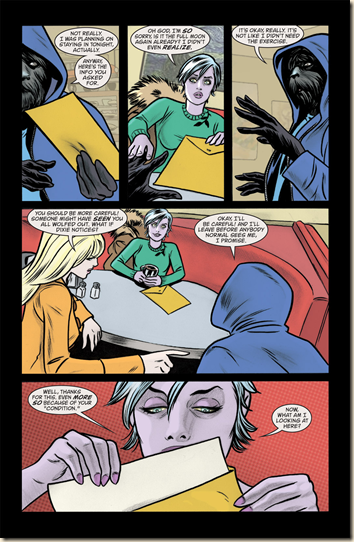 iZombie is not, however, a rip-off of the TV series. It is its own beast. Roberson does some pretty fun stuff, twisting the supernatural elements ever so slightly to suit his purposes. The “demented mummy” of the synopsis, for example, ends up being quite an interesting character, connected with the first brain Gwen eats.

Into her relatively stable and relaxed life stumble a pair of monster hunters, a vampire coven who run a paintballing operation (good for luring big men to lonely spots for a nibble), and also a potential love interest for Gwen.

As you can see from the samples included in this review, the artwork is pretty good: it’s an interesting, bright retro style. There’s something Warholian about it, and I liked the vivid colouring throughout – it made a nice difference from the dark and gloomy undead-related comics I’ve read. I like this a lot. Also nice? This is one of the most racially diverse comics I’ve read.

This book is very much an introduction, and doesn’t really get much further than situating the reader in the world and into Gwen’s life. The final chapter sets up the next arc, though, and that promises to bring much more mystery, monsters, possibly some action, and more of the trials and tribulations of being a single dead female in Eugene, Oregon.

I will be definitely be reading more of this series, as soon as I can get my hands on the other three volumes. (The series is complete.)