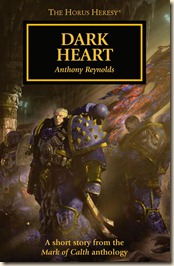 The beginning of Marduk’s legend

When the Word Bearers launched their surprise assault on Calth, it marked the beginning of their righteous campaign of vengeance against the hated Ultramarines Legion. But for one young acolyte of Kor Phaeron, it is not the sons of Guilliman that he seeks to bring low – through infernal pacts and daemonic power he strives to carve out a destiny for himself in the midst of the greatest war that the galaxy has ever seen. The name of Marduk shall be spoken with awe for millennia still to come...

Dark Heart is one of the stories that will be included in Mark of Calth, the next Horus Heresy anthology from Black Library. Normally, I don’t buy these stories early and separately. I always prefer to get the finished anthology, in one book, but at the time this was released, I was just really in the mood for some more Heresy after reading Betrayer (which I finished the day after this was made available on Black Library’s website). Overall, this is a very enjoyable short story, one that will certainly whet your appetite for the rest of the anthology.

This story ties in with Reynolds’s earlier Word Bearer trilogy, which also features Marduk and Burias. At the time of this story, set during the battle on Calth, it seems that both of these characters are still very young. Marduk takes center-stage, and Burias is mentioned as a secondary character. The former has only fought for the Legion a handful of decades at most, but is already displaying prodigious psychic ability and a burning zeal for the Word Bearers’ new religion.

As it turns out, Marduk has also been incarcerated by his own Legion. Because he killed his assigned “mentor”, who was utterly incapable of teaching how best to serve the Pantheon, as a result of his lack of psychic abilities.

Kor Phaeron, Lorgar’s old, pre-Legion general and mentor, wishes to know how Marduk killed Bel Ashared. This forms the core of the story, around which Reynolds weaves more detail of the attack on Calth, and inserts Marduk into it quite nicely.

I really enjoyed this story. It offered me a nice introduction to Burias and especially Marduk, and tied in very well to the end of Dan Abnett’s Know No Fear. He’s an interesting, twisted character, and reading Dark Heart has made me really want to read Reynolds’s Word Bearer series – the novels Dark Apostle, Dark Creed, and Dark Disciple, and the concluding short story, Torment (all of which are available as individual eBooks, and also a printed omnibus).

The story is well-written, with great characters and plenty of intense action. Reynolds keeps description controlled and never succumbs to the desire to exaggerate the Chaotic. I’ll definitely be reading the Word Bearers series in the near future. And pretty much anything else by Reynolds that I can get my hands on.