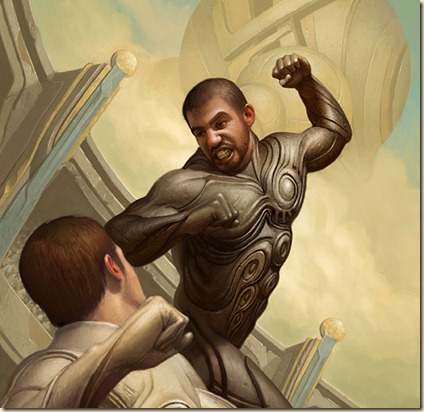 As is the case with so many debut authors these days, I tend to stumble across new names when a piece of artwork is released for their first novel. I have no idea why this is. Perhaps it’s a Universal Law or something? Anyway, I spotted the artwork for Zachary Jernigan’s debut, No Return, and did some more digging. Published by Night Shade (imminently), it sounds really intriguing. Zack was kind enough to say yes to an interview request, to talk about his writing, how he actually doesn’t enjoy it that much (but loves finishing) and his thoughts on the wider genre as a whole.

Let’s start with an introduction: Who is Zachary Jernigan?

Zachary Jernigan is one of Patrick Rothfuss’s pseudonyms.

Just kidding. I’m not a pseudonym. Instead, I’m a cantankerous 32-year-old man who lives in Northern Arizona. I write science fiction or, depending on how you look at it, fantasy. (You can read some of my fiction here.) I love Mexican beer and – I swear to you I’m being serious, and in no way making fun of those with disabilities – riding around in a wheelchair.

Perhaps an explanation is necessary. I used to have this front desk job – a very tedious front desk job, in fact. One evening, in an effort to alleviate my boredom, I started riding the guest wheelchair around the lobby and discovered I loved it. I also found out that balancing on the back wheels was so much easier than I had ever imagined AND GOOD GRIEF WHY ON EARTH AM I TALKING ABOUT THIS IN AN INTERVIEW?!

Your debut novel, No Return, will be published in March (Night Shade). How would you introduce it to a new reader? Is it part of a series?

Well, it’s about a religious war on another planet. On this planet, Jeroun, God actually exists – or, at least, a being powerful enough to be called “God” exists. This being, Adrash, has gradually gone insane over the millennia, and now threatens the entire population of the world with destruction. In response, the people either worship or condemn him. No Return is the story of a group of individuals, and how they respond to this situation as the world spirals ever closer to madness. It’s got alchemical astronauts, men made of metal, fighters in skin-tight suits, and an awesome woman who fights with a dull sword.

Though it’s (hopefully) a complete stand-alone story, it does end with quite a few ragged edges to mend. With any luck, a sequel – another stand-alone tale, the matching piece to No Return – will hit shelves by the fall of 2014. 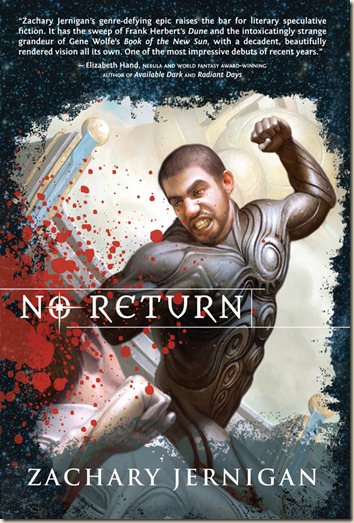 Oh, so many things, too numerous to list here, really! Certainly, most of the inspiration for No Return came from all the SFF literature I’ve read over the years (big surprise, I guess), and even more especially from those stories wherein the authors tried to construct a mythology – either from the ground-up or from an existing source. Roger Zelazny’s early novels (Isle of the Dead, Creatures of Light and Darkness, Lord of Light) are perhaps the most obvious inspiration.

As far as my inspiration in general, I suppose it’s the possibility of entering into a conversation with readers. I’m a very social person, easily more extroverted than introverted, and this shapes my purpose in writing to such a large extent that I have a hard time understanding why anyone would write “just for themselves.” I have no problem with people writing for themselves, of course – why would I? – but to me the excitement of writing comes from knowing that someone, somewhere might read my work and begin a conversation about it with me, and from there go on to whatever topics excite us most.

Y’know, I don’t really remember! (I have a terrible memory, so that’s no surprise.) It probably started with superhero comic books, of which I read more than a few during my early adolescence. From there I think it was kind of a straight shot to genre fiction.

Wait. Something’s coming back to me...

Oh, right, now I got it: When I first started reading a lot of novels, in my mid-teens, I felt an enormous burden to read THE CLASSICS, but as time went on it became more and more apparent that I wasn’t happy with stories that didn’t have speculative elements in them. When I discovered that a lot of great writing – the kind of writing that didn’t embarrass me to read – was happening (and had happened) in genre fiction, I was forever converted.

I’m not that big a fan of being a writer while the writing is going on, because it’s a lot of very hard work. In fact, I’d go so far as to say I don’t like the actual writing part at all – or at least so rarely that it’s almost a moot point. But the being done part? The occasional story acceptance email part? The conversing with other readers and authors part? The conventions part? I absolutely love all those parts!

Thus far, my experience with the publishing industry’s been pretty great. I love the folks at Night Shade; overworked as they are, they still put out immensely cool books. The editing process for No Return went very smoothly, and I’ve got an amazing cover to go along with my story. I’m thrilled, through and through. Also, nearly every publishing professional I’ve met has been welcoming, enthusiastic about my work, and willing to give me a little advice when I need it.

As for specific working, writing, and researching practices… I’m not sure. I think I spend just as much time as others – and very likely more – distracting myself from what I should be doing. The avoidance of work seems to be nearly as ubiquitous a practice among writers as the writing itself, for which I’m intensely grateful. I’d hate to think I’m the only one who’s spinning his wheels 90% of the time! 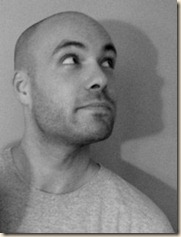 Great question! It honestly never occurred to me that being an author was a practical option – that is, something that an ordinary numbskull like me could achieve – until my mid-twenties. Before that, I’d sometimes lament the fact that I didn’t have the wherewithal (dedication) to sit down and put in the effort to write stories, but this hides the reality, which is that I really didn’t think it was possible for me. Oh, sure, I’d begin stories now and then, yet these aborted attempts were little more than flirting with the act of writing, and I knew it.

Frankly, it was depression and self-loathing that propelled me to finally craft a few short stories – and depression and self-loathing are pretty weird conditions to look fondly upon. In time, I might look back and be able to feel something approaching fondness for that period of my life, but right now I just want to travel back in time and tell that Zack to quit being such an overdramatic turd.

I think the genre in the English-speaking world is a vibrant creative space that only becomes more vibrantly creative each year. We keep pushing the subgenres outward, incorporating new and exciting things.

At the same time, it’s still – I think obviously – too white, male, Anglocentric, straight, and cisgendered. We should, as speculators-by-trade, be quicker to embrace the perspectives of people who may seem like outliers but are in fact greatly outnumbering white, male, Anglophonic, straight, cisgendered individuals by many orders of magnitude. We’re moving in the right direction, but more events like Racefail ’09 need to be confronted to force the perspectives of the traditionally underrepresented to the fore and prevent white men from always speaking for everybody else.

I’m not saying progress isn’t occurring, of course, but it could always be faster.

As for how I view my own work: though I never thought of it this way before other people started making the comparisons, I think No Return fits rather neatly into the New Weird category of fiction popularized by guys like China Miéville and M. John Harrison – though I think my novel is far more approachable (read: easier to get, or “poppier”) than anything by either of those fellows. (This is probably because I’m not nearly as smart as Miéville or Harrison.)

The funny thing is, I think my novel kind of falls in with theirs by default, because it’s such an obvious mishmash of science fiction and fantasy. In another era – say the sixties, my favourite decade for written SFF – I think that I might have been placed in the New Wave next to Zelazny and Delany. I am, obviously, being very charitable to myself by saying this, but it more exactly reflects the writing to which I’m paying homage.

I don’t like this question as much as some of the others. Working! Ack!

Can “I’m thinking very intensely about a lot of important stuff?” be my answer?

No? Crap. Okay. I’ve got an outline for the sequel to No Return, and any day now – I swear: any day now – I’ll dig into that. I’m really intimidated by the prospect, but I will do it.

I’ve also got a very strong beginning (20,000+ words) done on a very, very dark and violent post-apocalyptic, post-steampunk novel. The main character, a surgically-altered warrior woman, is contracted to transport a little child assassin across a machine-haunted landscape. It’s kinda cool, I think, but man, did it create some strong reactions in the writing group I showed it to. “I won’t be able to keep reading if you keep this scene in here,” was the sentiment of one participant. As a writer who doesn’t think of his aesthetic as being all that dark, I found this surprising.

Embassytown, by China Miéville. I’m not convinced it’s all that great, but I am convinced it’s worth reading. It’s taking me forever to finish it, though.

Okay, not really, but that’d be cool, wouldn’t it?

Talking to people! Really, I’m so excited to hear what people think of No Return. If, of course, everyone hates it, then that won’t be as fun. Hope springs eternal, though! I keep my fingers and toes crossed that something in it will resound with people.

~ Thanks so much for having me, Stefan! I really enjoyed it!