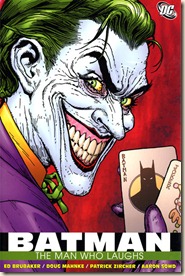 A mysterious homicidal maniac is murdering prominent citizens of Gotham City, each time leaving a ghastly grin on the victims’ lifeless faces. Batman soon tracks down the killer: The Joker! This volume gives readers new insight into the early encounters between Batman and The Joker that led the Clown Prince of Crime down the path to insanity.

I knew nothing about this book until I saw it in the library (seriously, Redhill Library has a surprisingly good selection of SFF and rotating selection of graphic novels). I’m very glad I found it, though, as this is a pretty strong book. Even if the title only refers to the first chapter, and the second chapter is linked only by the fact that Brubaker wrote it. The bulk of the book is taken up by the “Made of Wood” story, which features the original Green Lantern. Both stories were very strong.

A homeless veteran has stumbled across a madman’s abattoir. The corpses have been left for months, each has its mouth slit into an obscene grin. One guess who’s responsible…

“Some of these people have been dead for nearly a month. I think whoever did this was practicing on them...”

The crazy starts shortly before the re-opening of Arkham Asylum, as the as-yet-unnamed Joker strikes during a press conference, and announces that he will be attacking and killing select, prominent Gotham citizens. 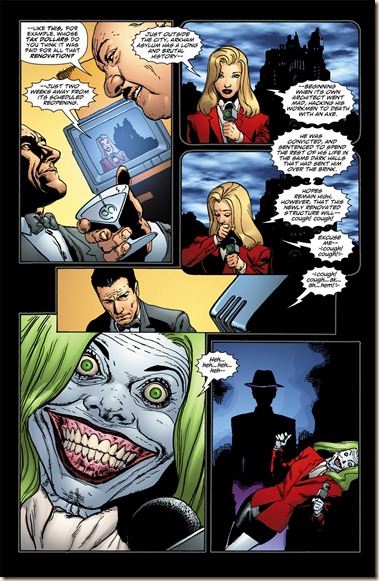 Not-Yet-Commissioner Gordon (still just “Captain” at this time) has accepted Batman’s existence and his mission, and also his help. He even seems to expect it, at times. Batman, though, is still not keen on open displays of vigilantism. Chronologically, this story seems to be set after Prey and the flashback sequences in The Killing Joke, tying in very well with these two classic early-Batman stories.

As the Joker’s campaign of violence and terror wracks Gotham, and as he unleashes an army of crazy psychopaths onto the streets, events ramp up to the inevitable, first-meeting (and fight, of course) between the Joker and Batman. Batman is still grappling with his own moral rules, and struggles not to let the Joker be foisted on his own petard. Instead, he settles for beating him senseless.

This is a great introductory story, actually. We see Batman getting to grips with his new mission, Gordon learning to accept Batman’s invaluable help, and we see the start of Batman’s never-ending, cyclical battle with the Joker. Really does the subjects justice, and I definitely recommend this story. 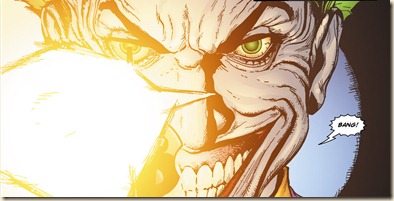 I think this story is set post-No Man’s Land, much like Rucka & Brubaker’s Gotham Central, Vol.1 (review coming soon – it’s very good, and I enjoyed the alternative perspective). Commissioner Gordon has retired, now walking with a cane. Barbara Gordon is working for Batman as Oracle. The story is narrated by both Batman and Gordon. 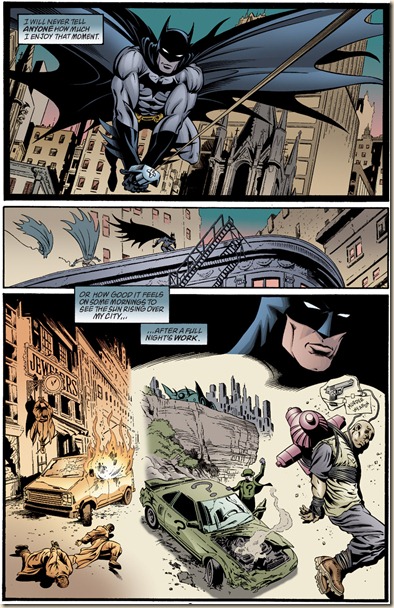 The story opens with Batman coming off-shift, enjoying the peace of Gotham at dawn. So is Gordon, who is enjoying the solitude of an early walk. However, his morning constitutional is interrupted when he comes across a cut-up corpse, with the words “Made of Wood” carved into his chest and his eyes gouged out.

The killing links in with the original Green Lantern, Alan Scott (who has been cropping up in a number of books I’ve read of late), and we learn a little more about this character, his weaknesses and also his past. He’s been gone for a while, and there is some soul-searching and commentary on the changing nature of Gotham violence. It’s nicely done, and adds some more depth to the story, as well as nuance to the characters involved. 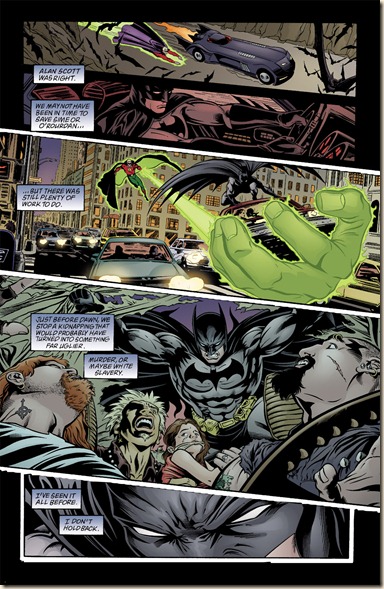 I’m not going to spoil my favourite moment of the book, but right at the end… Really touching, moving moment for Batman, which really made me smile. (Relates to Bruce’s youth, as well as his current mission and the original Green Lantern.)

Gordon can’t help but get sucked into the investigation, even though he’s retired, injured, and in over his head. He’s determined to help solve the case. Unfortunately, the killer (who has also been going after other criminals in Gotham), is one step ahead of Gordon, and things don’t go according to plan… 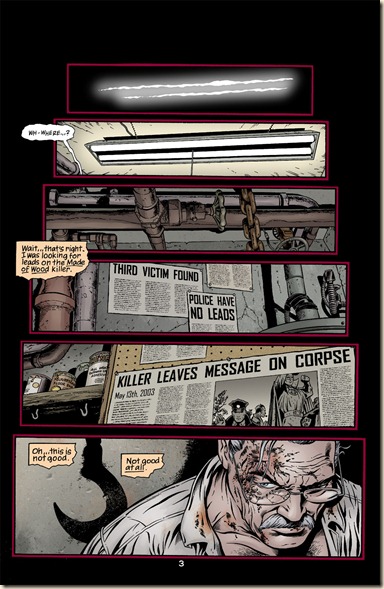 Brubaker does make one serious mistake in this book: he writes an Irish accent… I have no idea if this is adhering to past precedent when the character “Doiby” features in comics, but… Damn, it was bad and irritating. It’s the type of rookie author mistake I made in very early, youthfully-enthusiastic fiction attempts… It’s a terrible idea. Doiby is, as a result, an awful character.

I really liked the more modern art-style, and I think I’ll have to track down some more of Zircher’s work (he seems to have worked on pre-New 52 Nightwing, which I would actually like to read).

I really enjoyed this story.

Overall, then, this was a good book. I enjoyed both stories – which are clearly tied together only by the fact that Brubaker wrote them. “The Man Who Laughs” is a much better title than “Brubaker’s Batman”, though, so there we go. It is also the more momentous story, of course. I rather enjoyed the second story, though I thought it was a tad thin in comparison to the title-story, and perhaps could have done with an extra issue or two. The first story was excellent, and I liked that Brubaker tied it in with Prey (art also by Mahnke) and The Killing Joke, and the Joker’s history. It’s expertly done. I think any fan of Batman will like this book, and think they should definitely track it down. (All the issues are also available on ComiXology.)