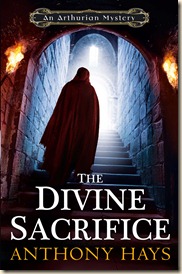 The Divine Sacrifice is Anthony Hays’s second Arthurian Mystery, following on from the well-received The Killing Way (2011). Sadly, I wasn’t able to get around to the first novel, but I have been interested in historical thrillers ever since I read some of Bernard Cornwell’s novels (true, not technically “thrillers” per se, but I history nevertheless). With the release of this second novel, I just might get my act in gear and try to catch up. Here’s the synopsis:

Welcome to fifth-century Britain: the Romans have left, the Saxons have invaded, the towns are decaying and the countryside is dangerous.

Malgwyn ap Cuneglas, an embittered former soldier who lost a limb in combat, is now a trusted advisor to Arthur, the High King of all Britannia. When a monk dies in horrific circumstances in Glastonbury Abbey, the Abbot calls for Malgwyn to investigate.

His search for the truth will draw him into an intricate web of religious, economic and political deceit - and a conspiracy that could endanger everything Arthur has fought for.