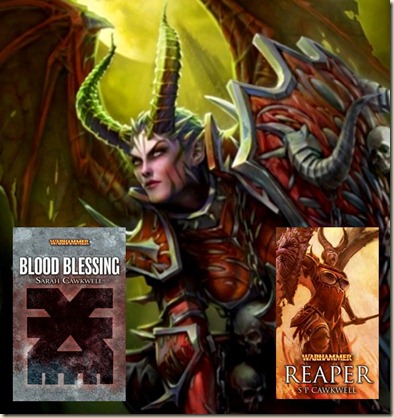 I have been woefully slow about reading Sarah Cawkwell’s full-length fiction for Black Library. I therefore decided to address this and, to get me in the mood for Valkia the Bloody, I thought I’d read the latest two (of three) short stories that feature Valkia, daemon princess and consort of the blood god Khorne (the third I have already read and reviewed). Both of these stories were considerable improvements on what I’ve read by Cawkwell in the past, and I really enjoyed both. 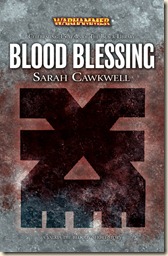 Approached on a blood-soaked battlefield by the terrifying, yet enthralling, Valkia the Bloody, a dying warrior is offered a choice: a bloody end or a life of eternal slaughter.

This is a (very) short story from Black Library’s 15th Birthday collection. It’s narrated as though Valkia is addressing the fallen warrior, but as if she is detached and rehearsing what she will say to him, when the time comes. It’s rather good.

“If you choose glory, Khorne will raise you up to more than you could ever imagine you could be. You will fight the Battle Eternal in His name, the endless thirst for blood and the desire to bring skulls to His Throne driving you ever onwards. You will fall countless times in those wars, banished to the eternal realm by the foul magic and enchanted blades of the living, but you will rise again and again.”

I liked the idea of a daemon taking a role similar to that of the Valkyrie from Norse mythology – only, here, she is a twisted and sinister version, and rather than carrying off the souls of brave warriors to Valhalla, she is offering bloodthirsty killers the chance to fight for eternity.

The extremely short format has meant Cawkwell has had to restrain some of the over-writing that has, in my opinion, weakened some of her previous BL work (especially the first Valkia short story). This is by no means Cawkwell’s weakness alone, I should point out: it is something that affects a number of BL’s authors (I had the same problem with Rob Sanders’s Atlas Infernal, for example), and it is a real hazard whenever something Chaotic is involved in a story. Here, however, Cawkwell has written a very tight, sharp slice of Warhammer fiction.

Overall, Blood Blessing is a masterfully-written and very well-constructed vignette, one that should appeal to fans of Warhammer, and perhaps also act as a good introduction to anyone interested in this character.

Empire Captain Kale von Kessel lies dying upon the field of battle after a doomed defence against the forces of Chaos. As the enemy leader – the infamous consort of Khorne, Valkia the Bloody – approaches to claim his head in the name of her dark master, von Kessel realises that his life of battle has been leading to this moment, and that Valkia wants more than just his head – she has been sent to claim his very soul.

This is another very good story. It’s longer (though still only a short story), which means it gives us a little bit more time with Valkia on the battlefield. We get to see how she addresses and approaches those warriors she has chosen. It has a pretty similar premise to the story reviewed above, but instead of a one-sided narrative, here Valkia takes us into the mind and past of von Kessel. It’s quite sinister, actually, as Valkia walks us through the imperial captain’s warlike… tendencies. It’s interesting to see her twist von Kessel’s perception, to pull back the veil on the many lies he’s been telling himself about his bloodlust.

As with Blood Blessing, Reaper is tightly written, with an overall dark atmosphere, and plenty of restrained-though-vivid description. It’s another taste of Valkia’s life and character, and it certainly piqued my interest in reading more about her and her bloody exploits.