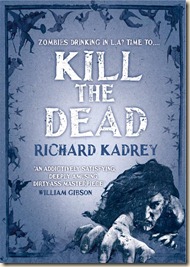 James Stark, a.k.a. Sandman Slim, crawled out of Hell, took bloody revenge for his girlfriend’s murder, and saved the world along the way. After that, what do you do for an encore? You take a lousy job tracking down monsters for money. It’s a depressing gig, but it pays for your beer and cigarettes. But in L.A., things can always get worse.

Death bites. Life is worse. All things considered, Hell’s not looking so bad.

It’s a little tricky to review this book, for two reasons. First, to go into too much detail will throw out a ton of spoilers for the first book. Second, I’d basically just be repeating all the praise I wrote in my review of Sandman Slim… Nevertheless, allow me to repeat myself…

Twisted from the get-go, I think Kill the Dead has one of the best first paragraphs I’ve read in a long time:

“Imagine shoving a cattle prod up a rhino’s ass, shouting ‘April fool!’, and hoping the rhino thinks it’s funny. That’s about how much fun it is hunting a vampire.”

Stark is out on a vampire hunt, which is a great, action-packed way to (re-)introduce readers to our anti-hero. Only six months have passed since the explosive, revelatory ending of book one. He’s still working (on a freelance, bitter-at-paying-taxes basis) for the Homeland Security-linked Heaven squad (which reminded me a little of the Initiative, from Buffy, only they actually are playing for the “good” side). His contact calls him in to look at a particularly freaky crime scene, which sets Stark’s mind to investigating and pondering what’s really going on in Los Angeles.

Speaking of Lucifer, I really like the way Kadrey’s written him. He is probably the only believable devil I’ve read in a very long time, and is certainly one of my favourite iterations of the character ever: he’s arrogant, disdainful of sycophants and hangers-on, but also (at least to Slim), a bit like a kindly uncle and mentor. There is something about him that reminds me of Dr. House. It makes it much easier to believe that this being could seduce followers and worshippers away from the light. Unlike some other versions, he is not a cartoon, with red skin and cloven-hoofs (like the one in that Tenacious D video).

As the two jobs come together, we learn more of Stark’s life in Los Angeles, how much he remains torn up by the death of his girlfriend, and how bad he is at normal human interactions. We also meet the most kindly dead guy (of whom I became extremely fond), learn more about Stark’s real father, and see some genuine character development – across the board, too. It’s not just Stark who grows and develops, but all of the recurring characters. Despite this being just book two, I felt like I’ve got to know the characters very well in a relatively short period.

Kill the Dead is funny, twisted, gripping, unrelenting, uncompromising, irreverent, and very well-crafted. (Adjectives, as you can see, flow freely and easily when describing this man’s writing…) Kadrey’s style and prose are very fluid, stripped-down. As in Sandman Slim, there were moments when Kadrey took time to indulge and expand the occasional metaphor or scenario, but unlike in some authors’ works this actually only improved matters. He has a very particular way with words that is alternately entirely new, Hunter S. Thompson-esque (in his more chemically-tinged moments), and highly, and colourfully descriptive. The novel elicited not a few chuckles, and plenty of snorts and outright laughter on the subway. That I was laughing with dark delight probably unnerved many of my fellow commuters. 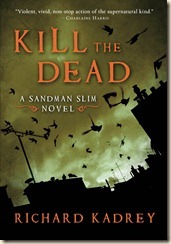 Oh, as a bit of an aside: Hypoallergenic golems? This is possible one of the most inspired segues in any novel I’ve read. It’s also a really important, oft-overlooked consideration – especially if they’re flaky and serving nibbles…

As with Sandman Slim, this novel is highly recommended (perhaps even essential), and with every new page I read of Kadrey’s writing, I become ever more addicted. This is a superb series, and one that should have every fan of Urban Fantasy, the supernatural, horror and generally excellent, slightly gonzo writing begging for more. Which is just as well, considering the fact that books three and four and a novella that bridges the gap between them, are already available in the US and UK. (Sorry, I don’t know about other territories, but if the series isn’t already available, then it can only be a matter of time.)