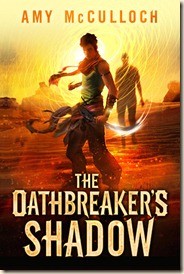 A great new voice in YA fantasy

Raim has worn a simple knot around his wrist for as long as he can remember. No one knows where it came from, and which promise of his it symbolises, but he barely thinks about it at all – not since becoming the most promising young fighter ever to train for the elite Yun guard. But on the most important day of his life, when he binds his life to his best friend (and future king) Khareh, the string bursts into flames and sears a dark mark into his skin.

The Oathbreaker’s Shadow is the first half of an intriguing, well-written and quite addictive new YA duology. It offers a great introduction to a new world, one in which the power of promises – and the consequences of breaking them – can make or break your entire life. Brilliantly imagined and brought to life on the page, this is a great debut.

The novel is broken into three acts, each detailing a different stage in Raim’s evolution from fast-track warrior and khan’s protector to shunned outcast. Raim is the best friend of future ruler of the land, Khareh. The first act introduces us to these two characters, and the extremely-well-realised world in which they live.

It takes a while for the knot-breaking mentioned in the synopsis to actually happen. This, for me, was no bad thing, as it gives McCulloch the time to take us on a detailed tour of this new, Mongolian-esque society. Everything from the structure of each tribe, the connections between them, and how some specialise to become more than just tribes, but Orders (for example, the Yun, who are elite warriors; the Baril, who are scholars; and so forth) is expertly woven into the story. It never felt like the author was info-dumping, and through Raim’s experiences, everyday life, and even initiation ceremony, we get to see this society come to life.

The centrality of promises and vows for these people is, of course, huge. It is also a physical act, rather than just a verbal promise. There is not only the process of tying a promise-knot to cement the pledge, but the consequences for breaking a promise will have real, physical and social consequences. There’s scarring, and there are the haunts.

Naturally, and perhaps thankfully, the promise-system is weaker for kids, as children are wont to be difficult and… mischievous, and therefore the consequences for breaking a promise as a child are far less severe. To offer two examples from early in the novel, “don’t eat my cake” or “score a goal in a game” were the sort of typically-self-defeating vows kids would make to each other.

“the elders would stop scolding and smile a little themselves, for they knew it was important for young children to test the consequences of their actions, so that they knew what to do when they were ready to make real promises.”

These “real promises” happen after they reach their Honour Age. At this point, their promises and vows start to carry far more weight. Their actions have greater consequences, just as breaking a promise will ruin their lives. We’re introduced to the aforementioned haunts, which seem to be spirit-like entities that hang over oathbreakers – often, they berate, abuse, and drive their marks mad. If the oathbreaker is lucky, being forgiven by the person they’ve wronged can lift the curse, and at least banish the haunt. It won’t, however, save them from exile to the City of Lazar, where all oathbreakers are sent – it doesn’t seem matter much if the promises they broke are large or small, either. The way McCulloch has woven this promise-related society into the novel, all the way through the story, is quite masterful, and it informs pretty much every element of the narrative. I really enjoyed reading about the society and the people she has populated her novel with.

There is a lot more to this novel than fantastic world-building, of course. McCulloch’s prose were well-composed and really drew me through the story. I became completely wrapped up in the story, as Raim is first exiled, then wanders in the desert, is sort-of rescued (by people who don’t really like him), and eventually arrives at Lazar. I was hooked early by the interesting world, but I remained hooked because everything fits together perfectly. This is an assured debut novel, and bodes very well for McCulloch’s future output.

There were a couple of moments or scenes where the flow wasn’t quite as fluid or smooth as the majority of the book, but they were fleeting hiccups. For example, sometimes it felt a little like time moved in quicker bursts than what I was reading might have suggested (to be clear, though, I was reading an early, pre-final copy, so it’s entirely possible some of these niggles could be fixed in the final version). Nevertheless, McCulloch’s prose and story pulled me along, entirely willing and eager to read more about her characters and their experiences. Each chapter is well-constructed to leave us wanting more, and by the end I was ever-more eager to get my hands on book two.

The Oathbreaker’s Shadow has really wormed its way into my imagination. I found myself thinking about how the story will end in the next book. There is so much awesome in here, but some of it is really tricky to write about. I don’t want to spoil any revelations, of course, or even some of the less-momentous-but-wonderful elements and developments of the novel. The City of Lazar, for example, and how it defies Raim’s expectations, their society (some of which reminded me a little of Morocco and its artisans). The nature of the Sages’ magic. The predators in the desert. And, ultimately, the revelations of the final act of the novel. There is so much packed into this novel. It never feels ‘busy’, though – it never feels like the author’s trying to cram in everything. Rather, it’s a very natural, expansive bit of world-building. The novel never lacked for imagination or enjoyment.

There’s plenty of character-development and growth as the story unfolds, particularly for Raim and Wadi. Khareh fades a little into the background after Raim’s exile, but he is replaced by “Draikh”, who is quite brilliant. Draikh is also the device through which we learn so much more about the world, its history and also how magic works in this setting. Wadi, who Raim meets in the desert, is a great foil for him – so different from the women he knew at home, and someone who puts him through his paces (emotionally and physically). I thought she was a great match for him, and certainly much better than the obviously ambitious, rather shallow girl he had a crush on at the start (who was, strangely, one of the only characters who was a disappointment, overall).

Returning to Khareh for a moment: he started out as one of the most interesting characters (in some ways, more-so than Raim), as McCulloch paints a picture of a youth who is fascinated by everything, and also endlessly tinkering and attempting to find fixes for everyday troubles, issues and tasks. Through this, we get this great snippet early on in the book:

“Raim recognized the pole – it was identical to the ones used to build the frame of a yurt. He wondered whose yurt was tilted after Khareh had sawed off this piece. When Khareh was inventing, nothing could stop him. Once he even cut up the Seer-Queen’s prized headscarf in order to get material of the perfect tensile strength for his goat parachute – ‘in case bandits attack and we have to drop the goats off a mountain,’ he’d said. That was the other thing about Khareh’s inventions. They rarely made any sense to Raim.”

It’s moments like this, as well as so many others, that make McCulloch’s characters so endearing and a pleasure to read about. You really feel Raim and Khareh’s friendship, and also the sorrow and fear felt by those who break their promises and vows. Later in the novel, though, Khareh changes a lot, and it felt a little too much, too soon. To be fair, most of his development takes place ‘off-screen’, so it’s probably just because we see Raim and, to a lesser extent, Wadi’s development happen before our eyes.

The angst when Raim is exiled after breaking the promise he never made is palpable. His frustration at not knowing what oath he broke, and his difficulty in finding answers, comes through brilliantly. After all, he’s only sixteen – but, thankfully, he’s never portrayed as melodramatic or “childish”. All too-often, authors will infantalise their child characters more than is realistic – which is part of the reason I’m always wary of reading novels with child protagonists. Raim’s society is one that breeds more-mature teenagers than our own, and it feels right that this is the case, making Raim, Wadi, and Khareh far more believable.

(In fact, it reminded me of Peter Brett’s characters – in both The Painted Man and The Desert Spear, in which the child protagonists were rarely, if ever, irritatingly childish… If that makes sense.)

On a completely random, side-note: McCulloch manages to capture the comedy of camels very well, with almost Pratchett-esque wit. (See, told you it was random…)

Overall, then, this is a very strong YA debut, and I can not wait for book two. I think a lot of people are going to love this book, this world and these characters. I think McCulloch has a bright future as an author.