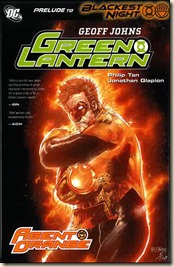 It’s the prelude to Blackest Night as the War of Light continues to intensify! Mongul attempts to establish his hold on the Sinestro Corps by enslaving the planet Daxam and making it the home world of his Corps. What does Sinestro’s right hand man, Arkillo, think of all this? And will Sodam Yat, the Green Lantern known as Ion, fight to save his homeworld, which he’s vowed to never return to?

So. Very little of what’s mentioned in the synopsis bears any resemblance to what’s actually in this book. Mongul and Arkillo, certainly, don’t feature at all. Regardless, Sodam Yat’s return to his homeworld is a feature, and has major repercussions for what the Green Lantern Corps is about to experience. This is another great book. The prelude to Blackest Night (which I’ve already read), this book collects the final issues of the pre-New 52 Green Lantern series. And they’re damned good.

My education in Geoff Johns’s work on the Green Lantern Universe continues with this prelude to Blackest Night. (Yes, I know I’m doing it completely backwards, starting at the end as I have. But, there we go – next I’ll go to the beginning with Johns’s Green Lantern: Rebirth, and then the pre-New 52 Green Lantern #1-6.)

This book starts with a very bad idea, as some people unwisely invading Larfleeze’s lair. Of course, this doesn’t go well at all for the interlopers. 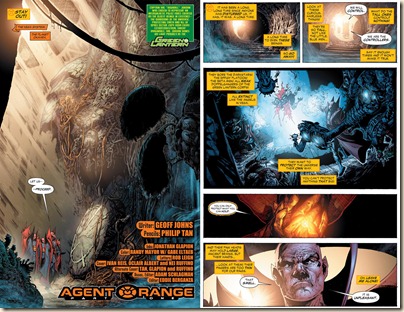 We then switch to Hal Jordan on the home-world of the Blue Lanterns. Somehow, he is wearing both a Green and Blue ring, and they are interfering with each other and annoying the hell out of their new bearer. Hal has been sent to lead the Blue Lantern Corps, apparently, but he was meant to do it with just his Green Ring and prodigious Willpower. As one does. [So, in other words, it wasn’t a great idea to drop right in at this point, as I’m already basically lost on what’s been going on…]

Ganthet, one of the blue fellas also known as the Guardians of the Galaxy, offers a speech that fills in new readers, though:

“The War of Light has already begun. We must prepare for the coming of the Blackest Night... The unknown darkness that threatens to consume all life.”

Sodam Yat, the fella mentioned in the synopsis, is sent back to his home-world, which has been considered off-limits to the Green Lantern Corps for reasons that have hitherto not been made apparent. 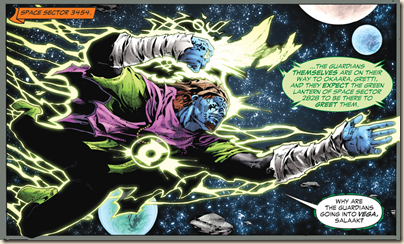 When things spiral out of control, the Guardians decide to ship the entire Green Lantern Corps to the world, to stop the malevolent force that has been living there, unhindered. That force? Larfleeze and his Orange Lantern Corps. Even though he featured in the New 52 series, Green Lantern: New Guardians, I didn’t actually know much about him or how his Corps operated. Thankfully, this book gives us far more information. 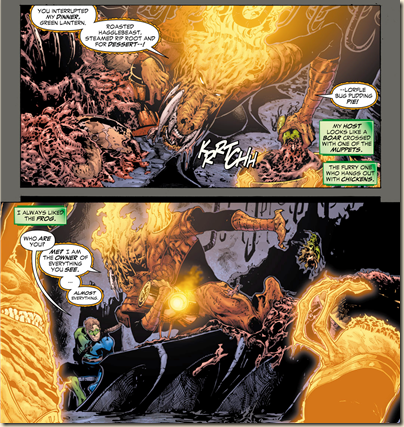 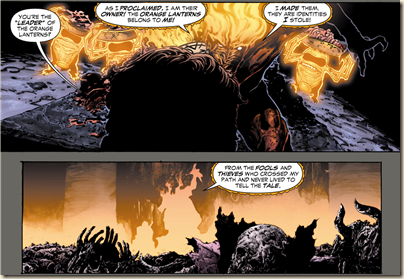 In the third chapter, we are also treated to Larfleeze’s tale. I thought it was very well done, and I’m always interested to learn more about the full-spectrum of the Green Lantern setting and worlds. It was interesting, and offered some nice world-/universe-building, filled in some gaps of my knowledge. This, for me, was the main strength of the book. Otherwise, it had the feel of a stop-gap – especially seeing as Agent Orange didn’t play the largest part in Blackest Night (though knowledge of his part of the emotional spectrum is useful to fully understand the end of that Event).

The book doesn’t end on the best summation – the story doesn’t really end. There’s a conclusion of sorts, but not as satisfying as I’d hoped. The epilogue sets up Blackest Night, and is followed by the “Origins & Omens” story of the “Book of the Black”. It features a moment of obvious wish-fulfillment regarding the Star Sapphires. It’s not very long or detailed, but it’s interesting nevertheless. This is followed by “Tales of the Orange Lanterns: Weed Killer”, the story of Glomulus (the round blob that says “Hee!” and “Mine!” a lot...) – it’s not a bad little tale, but not exactly essential. The story is followed by visual dramatis personae of the Green, Yellow (Sinestro), Red, and Blue Corps, plus the Indigo Tribe, Star Sapphires, Agent Orange and finally the Black Lantern Corps.

The artwork throughout is pretty solid, and certainly as vivid and colourful, not to mention in-your-face eye-catching that I’ve come to expect from a Green Lantern-related titles. It is not without its flaws, but on the whole, this is very consistent, strong artwork. I think my only complaint is the exaggeration of Fatality/Yrra’s physique. She has humongous breasts. Sure, that was a convention in comics for a long while, but seriously. They looked like someone stuck balloons to her chest: 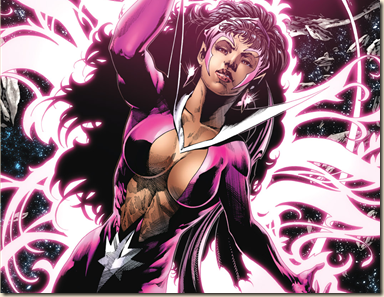 Overall, then, this is an enjoyable book, and only increased my interest in going back to the start of Johns’s run on the Green Lantern series. I picked up the issues I mentioned near the start of this review from comiXology, so expect a review in the not-to-distant-future.