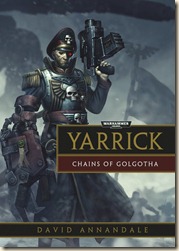 From the ashes of the Second War of Armageddon a hero of the Imperium emerged. War-torn and bloody, Commissar Yarrick swore vengeance on the beast that escaped his righteous wrath, the despoiler of Armageddon – Ghazghkull Thraka.

Tracking down the ork warlord to the desolate world of Golgotha, Yarrick leads an armoured company to destroy the beast but does not reckon on Thraka’s cunning. Ambushed, his army all-but destroyed, Yarrick is captured and awakes to find himself aboard the beast’s space hulk facing a fate worse than death...

This is a very fine science fiction novella. Annandale has been writing for Black Library a while, now, and with each new release I am even more impressed. Taking on one of the most beloved Imperial characters from the Warhammer 40,000 canon, though, could be a daunting task. Annandale has risen to the task admirably, however, and has managed to capture the essence of Yarrick and his struggle against Ghazghkull excellently. Chains of Golgotha absolutely does his subjects justice.

The story is told from multiple perspectives, but predominantly from Yarrick’s. The others, from Colonel Rogge and Teodor Helm, for example, add extra colour and allow Annandale to step back and show us how those around Yarrick see him. It offers a nice juxtaposition with his own insecurities and recognition of how people view him. His loyal aide de camp, Lanner, is very good at keeping Yarrick grounded, for example.

“For my pains, my reward was a barrage of outrages too studied to be real. They were theatre for my benefit, and it was theatre that I needed, especially since Armageddon. It was one thing to be aware of one’s own legend. Lanner made sure I didn’t believe in it.”

The story takes place two years into this current campaign, and it is not going very well for the Imperial forces. Yarrik has accepted that he has a nemesis, an enemy who is making statements in his attacks and strategies aimed at him, taunting him at the same time as destroying as many Imperial forces as possible. That nemesis is Ghazghkull Mag Uruk Thraka, a hulking beast of an ork warlord, who has been uniting hundreds, if not thousands, of ork warbands and has cut a bloody swathe across space. He is not an opponent to take lightly, but nor is he a typical ork leader.

“As much as it disgusted me to even articulate the thought, there was a monstrous truth that had to be faced: Thraka had the potential to become the ork emperor.”

Late in this campaign, we join Yarrick as he is leading his army to a rendezvous point. It’s been a long, hard-fought campaign, and as well as the continued depravations of the ork forces, support for the war (political and moral) has waned precipitously.

“I had to fight tooth and nail for every tank, every rifle, and every man of my army, every single day since the enthusiasm for the crusade had evaporated in its second year.”

Little does Yarrick know, however, that things are going to get much, much worse for him. As the Imperials are ambushed and their troops either butchered or captured, Chains of Golgotha morphs into a very interesting, unique Warhammer 40,000 tale. We’re taken aboard a vast space hulk, and Yarrick comes face-to-face with Thraka. As I just said, though, this is a highly original story, and nothing plays out as I expected. I will, therefore, not spoil any more of the plot – needless to say, though, this worked for me on every level.

Chains of Golgotha is a great intro to the character. I really liked the tone and voice of the story and of Yarrick. Annandale’s writing is excellent, as well. The author has a gift for giving all of his characters distinct personalities and voices. It hasn’t always worked for me in the past (Mephiston, sadly, was rather odd in Eclipse of Hope), but he nails it in this novella. I’ve also really enjoyed some of his other work (Carrion Anthem, especially). In this story, he once again shows his gift for bringing the maelstrom of warfare to life on the page – it’s an absolute whirlwind at the start, but on the hulk it becomes much closer, more atmospheric and in some ways even more brutal.

Yarrick: Chains of Golgotha is a fantastic novella, and hopefully the first of many Yarrick tales to come. Annandale is definitely one of Black Library’s best up-and-coming authors.

[Chains of Golgotha is also available as a special edition hardcover, but I bought the eBook edition.]