The Republican Convention is in town, and a killer’s on the hunt

In Wicked Prey, the 19th Lucas Davenport thriller from one of America’s best thriller authors fails to disappoint.

With the Republican Convention in town, Minneapolis’s police forces are stretched to breaking point. A team of professional criminals, led by Brutus Cohn, have decided to take advantage of the vast amounts of cash involved in presidential elections. They have organized an ingenious scheme to get (very) rich quick while avoiding attention from law enforcement. Unfortunately, they failed to factor Davenport into the equation, as he sniffs out the smallest leads to track them down. As things escalate, and they’re pushed into a corner, the chase becomes deadly.

Meanwhile, Lucas must also deal with troubles at home, juggling the various women in his life – Letty, his ward, is slowly starting to exert her independence, working at a local news station. To add further trouble for him, Randy Whitcomb, a paraplegic pimp, has decided that Lucas is the root of all his woes and decides he wants revenge, one way or another. The problem is, Letty’s budding journalistic tendencies are pointing her in Whitcomb’s direction…

Sandford remains the king of American thriller authors. His plots are always seamlessly constructed, his criminals ever-changing and increasingly cunning. Wicked Prey has a slower start than normal, as the author allows things to build to a gentle simmer before the action and chase begins. His prose keep the reader hooked, pushing ahead as events unfold on the pages. One of the best things about the Prey series is the attention paid to the relationships between the recurring characters – be it Lucas and his wife, Weather, or among the employees of the Bureau of Criminal Apprehension.

To say more would be to give away too much of the plot. Needless to say, Wicked Prey is easily one of the best crime/thriller releases of the year, and is an absolute must-read for all. If you like thrillers, this will tick all the necessary boxes for you. I always finish a Sandford novel completely satisfied, while also wanting more. As the author expands another of his series (featuring Virgil Flowers, a protégé of Davenport’s), each year offers more and more opportunity to read his work. Now, if only he’d revisit the Kidd series…

Impeccably written, populated by interesting and colourful characters, this could not come more highly recommended.

Posted by Civilian Reader at 7:59 PM No comments:

“Library of the Dead”, by Glenn Cooper (Arrow) 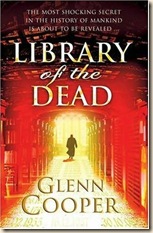 Will Piper is the FBI’s best serial killer profiler, just counting down the days until retirement. Following a professional disgrace, he found himself demoted and just going through the motions. When the Doomsday Killer case gets tough, and the lead investigator has a stroke, Will’s called in to take point.

The Killer sends a postcard, ahead of time and marked with a date and time of death and a coffin, to each of his victims. There is little to connect his victims – they vary in age, sex, socio-economic scale, everything. Will and his new partner, Nancy, grind their way through the data in search for any clue of the killer’s identity. Little do they know, but the Doomsday Killer has roots far back in history, and this is much bigger than either Will or Nancy could have guessed.

Cooper’s style is pretty good. His plot is competently put together, and the reader is left guessing throughout. (Not always good, actually, as Cooper has a tendency to really make you wait for some things.)

His characterisation is pretty good, but it took a long time to get a read on Will. His internal monologue didn’t always match his actions – internally conscientious and aware of others, but his actions were sometimes abrasive and obnoxious(particularly when he first starts working with Nancy). The author weaves history and the present well, mixing existing myth with some new twists to classics. The flashbacks go way back, too, which only adds to the mystery.

A highly enjoyable thriller with a difference, with Library of the Dead Cooper shows great promise to have a long, successful career as a thriller author. I eagerly await his next novel featuring Will Piper, Book of Souls.

Posted by Civilian Reader at 2:25 PM No comments:

“The Edge of the World”, by Kevin J. Anderson (Orbit) 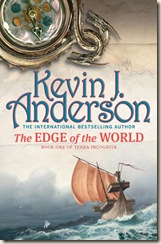 Two nations, separated by history and religion, but physically joined by a narrow isthmus, on which lies the holiest city for them both. Traditional enemies, the two nations forge an uneasy peace, an Edict consecrated with the blood of their leaders on their most holy of shared relics.

A tragic accident during the peace ceremonies and revelries in the holy city of Ishalem, lead to irrevocable acts of misguided revenge and the world descends into bloody, vicious war. As guerilla, hit-and-run conflict rages across the two continents, King Korastine of the Tierrans unveils his greatest project – the majestic ship Luminara, commissioned to explore and chart those regions of the world designated “Terra Incognita”, marked only by the words “here be monsters”.

This is a gripping and immersive tale of war, adventure, sacrifice, loss, Machiavellian politics, revenge, and tragedy.

The Edge of the World is that rare fantasy novel that hooks you from the very beginning. Even though Anderson is creating a whole new world, the reader is never left feeling lost, and we quickly feel at home with his characters (so much so, that even minor characters who are killed off are a surprise). The story is told from a number of perspectives, each from different strata of Tierran and Urbecan society, with their own unique views and approach to the world around them – the rulers of the two nations and their offspring, witnessing events spiral out of control; Criston Vora, a young shipman on the Luminara; Adrea, Criston’s new wife, taken captive by Uraban raiders; Hannes, a former spy for Tierra’s church of Aiden, horribly burned and in the custody of an Uraban queen, trying to get home and serve his own, brutal version of his religion.

It’s very difficult to review this book: if I were to go into much detail, it would require describing and spoiling a good deal of the plot. Needless to say, the work and imagination Anderson has poured into the novel is impressive. Over the course of the novel he slowly builds our understanding of the three cultures (two previously mentioned and also the Saedran) and the people within. It is a fascinating world, and one that can’t fail to offer endless possibilities for the future.

What’s particularly interesting about this world and this novel, is Anderson’s ability to make the world feel familiar, even though it is so very different from our own. Universal issues, such as loss, religious zeal, love and vengeance are all major parts of Anderson’s story. The trials his characters endure help shape them and their trajectory through the story, each thread connecting at some point, just the right moment to send things in a new direction (particularly towards the end of the novel). Best of all, he’s managed to avoid pretty much every fantasy cliché, which makes for a highly original novel.

The author has managed to get the balance between the various strands right, and doesn’t chop and change too frequently between them. Rather, he gives us just enough to keep us reading, to keep engaged and involved with the story, and also enough to become attached to all his characters. As the story progresses, over the span of a couple of decades, you will find yourself immersed in the story, eager to find out what happens, but equally not wanting it to end (that this is “book one” means it won’t end – at least for a long while, anyway).

Without doubt one of the best new fantasy series in many years, it belongs alongside the greats of the genre. From Anderson, who has written 46 international bestsellers, one would expect little else. Easily the most engaging fantasy novel released this year (thus far), and an immediate favourite of mine.

An engrossing, sweeping fantasy epic, The Edge of the World is essential reading for all.

Posted by Civilian Reader at 7:20 AM No comments: