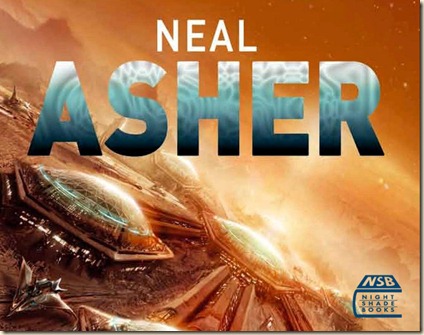 Neal Asher, British Sci-Fi author extraordinaire, is finally coming to the US! Properly. Night Shade Books, “in an attempt to catch up with the British” (as it was told to me), are publishing Asher’s Owner series in quick succession in 2013. Starting with The Departure in February, and followed by Zero Point in May, and Jupiter War in August. Therefore, to celebrate this news, here are some details about the first two novels… 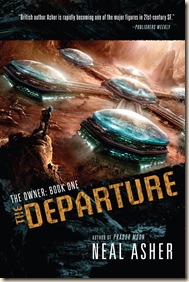 An overpopulated world is under the brutal, high-tech thumb of the Committee. Towering robot shepherds, pain-inducers, and reader guns maintain control over masses of zero-asset citizens, but for the elite this not enough. Twelve billion must human beings must die before the Earth can be stabilized, and the Argus satellite laser network is almost ready.

Waking in a crate destined for an incinerator, Alan Saul remembers only pain and his torturer’s face. But he has company: Janus, a rogue AI inhabiting the forbidden hardware in his skull. Saul intends to stop Argus and get his revenge on the Committee–once he finds out who he used to be.

Abandoned by the Committee, the Antares Base faces extinction. The colonists there will not be returning to Earth nor will they be receiving any additional supplies or support. Unless they are very ingenious, they will run out of resources and be dead within five years.

As if that’s not dire enough, Varalia Delex finds herself caught in a violent power struggle with the base’s ruthless political officers–who see everyone else as expendable. As spilled blood turns the Red Planet even redder, Var discovers that Mars holds very new and interesting ways to die... 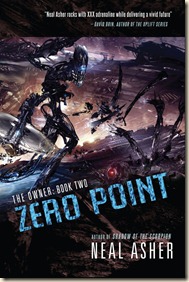 Earth’s Zero Asset citizens no longer face extermination from orbit. Thanks to Alan Saul, the Committee’s network of control is a smoking ruin and its robotic enforcers lie dormant. But power abhors a vacuum and, scrambling from the wreckage, comes the ruthless Serene Galahad. She must act while the last vestiges of Committee infrastructure remain intact – and she has the means to ensure command is hers. On Mars, Var Delex fights for the survival of Antares Base, while the Argus Space Station hurls towards the red planet. And she knows whomever, or whatever, trashed Earth is still aboard. Var must save the base, while also dealing with the first signs of rebellion. And aboard Argus Station, Alan Saul’s mind has expanded into the local computer network. In the process, he uncovers the ghastly experiments of the Humanoid Unit Development, the possibility of eternal life, and a madman who may hold the keys to interstellar flight. But Earth’s agents are closer than Saul thinks, and the killing will soon begin.

I couldn’t track down any artwork for Jupiter War (neither from Night Shade Books nor Asher’s UK publisher, Tor). I’ll be sure to share any information and cover art as and when it becomes available. I also hope to get The Departure read in the very near future – Asher is one of the SF author’s I’ve always wanted to read, but as is common for me, I keep getting distracted by debuts and other new releases (although, I have been sent later Polity novels on occasion, but I hate starting late in a series…). Watch this space!