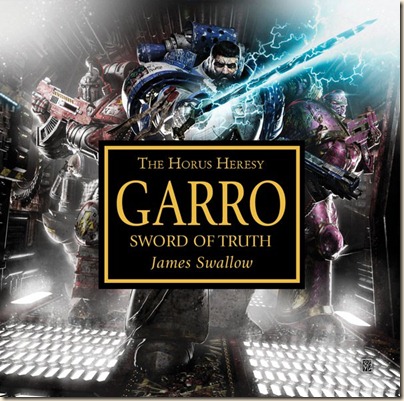 Nathaniel Garro, knight errant and agent of the Sigillite, returns from the battlefields of Calth to find a new mission already waiting for him – a ragged fleet of Space Marines from several Legions lingers at the edge of the Terran system. With the presence of the World Eaters and Emperor’s Children causing concerns among the loyalist defenders and drawing a grim parallel with his own frantic flight, Garro must look beneath the obvious if he is to determine friend from foe…

A new Horus Heresy tale is always welcome, and a Garro audiobook particularly so. In the first double-disc story, our newly-reassigned, loyal Death Guard must represent the Sigillite in an investigation of a surprise fleet that has appeared very close to Terra. Questioned loyalties, unflinching duty, and a deadly conspiracy await Garro and his companion Rubio. All is not what it seems. And in a time of civil war, tempers flare easily, and personal prejudice can overrule caution all too quickly.

Sword of Truth opens with a scene in the Somnus Citadel, a fortress on Luna, and the base for Garro and the Sigillite’s clandestine team of disparate Astartes. Garro has recently returned from an early assignment, and while he is becoming more accepting of his new role, he has not grown entirely comfortable with it. He feels adrift, as do the other Space Marines he has gathered, each of them now divorced from their original Legion. This fact is highlighted when Rubio, a former Ultramarine psyker, is presented with his new suit of armor. Rubio is conflicted about shedding the Ultramarine cobalt, and donning the cold grey of Garro’s team. At the same time, though, Rubio is sanctioned to use his psychic abilities once again, for the first time since the Edict of Nikaea prohibited their use.

The first, long scene also offers listeners an impassioned catch-up of events that have recently transpired, as Garro reminisces about the journey and action that has brought him to his current role.

Garro and Rubio are called away by a particularly grumpy Custodian, Corarin, when the World Eaters’ ship Daggerline enters the system. They are ordered to investigate the newcomers, and determine their loyalty. There is a great deal of tension, though, as Corarin treats them like run-of-the-mill Astartes (if one can say there is such a thing). The Custodian considers Garro little more than a traitor waiting to be unveiled, and is uncomfortable and suspicious of Rubio’s obvious use of his psychic gifts. The Daggerline is bearing a number of Astartes, from the World Eaters, Emperor’s Children and White Scars Legions, as well as civilians and a contingent of Imperial Guard soldiers. All are survivors of the betrayal at Isstvan. The fact that the White Scars are present was welcome – except for one short story, and asides, they haven’t featured much at all in widely-available Heresy fiction (Chris Wraight has written a White Scars-focused limited edition story, Brotherhood of the Storm, but like all of those books, it sold out in hours and won’t be available in any other format for at least two years after publication).

Tensions are running so high, that conflict erupts between the investigators even before they really start assessing the new arrivals. This distrust will influence all actions going ahead, and what follows is a very well-written, well-paced story of intrigue and betrayal. For example, Garro discovers that the Custodian has put in place orders that could in a moment obliterate everyone in the corralled fleet, despite orders from the Sigillite to the contrary. Then other things start to go wrong, and all hell breaks loose. In the meantime, Rubio starts sensing something on one of the refugee ships. Something that is specifically trying to hide itself from him. There is certainly a benefit to Garro’s forces being exempt from the psychic power ban.

The acting and narration throughout this story are superb. There was very little over-emoting, for which I am absolutely thankful (I recently listened to another audiobook that failed on almost every level). In fact, Sword of Truth is one of the few audiobooks in which the emotion sounds mostly genuine throughout. Garro when he’s angry sounded a tad forced, but the Custodian, Rubio, and the World Eater captain, Macer Varren, were very good. Among the best performances from a Black Library audiobook, certainly. I also liked Varren’s slight London accent – it mades him sound very personable. For a killing machine…

Speaking of killing machines, there was no mention of the Butcher’s Nail in any scene featuring Varren. This I found very odd, actually, given their prominence in Anthony Reynolds’s Chosen of Khorne and Aaron Dembski-Bowden’s World Eater’s fiction – the superb novel Betrayer, and the audiobook Butcher’s Nails. They are so central to the World Eater identity, I was very surprised that they were absent.

The sound effects are measured, and the production team has resisted the urge to be over-the-top or cartoon-ish. The music soundtrack, though, reminded me a bit of Red Dwarf’s theme tune… Not a bad thing, necessarily, but it made me chuckle.

The story builds to a satisfying, twisty conclusion, as a conspiracy is finally unveiled. It was not what I had expected, and was a very nice twist. (There’s more I’d like to write about it, but it would spoil too much. Maybe in a later review.)

Sword of Truth is another excellent installment in Garro’s tale and the Heresy as a whole, adding more layers of understanding and nuance to the galactic civil war that is tearing the Imperium apart.