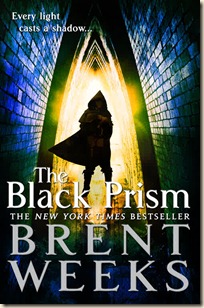 This isn’t an entirely new release, of course (I reviewed The Black Prism back in September 2010), but with the paperback release, Orbit have commissioned an excellent new cover for the first novel in the Lightbringer series. The new artwork matches the style of The Blinding Knife, the sequel. Here’s the synopsis, in case you missed the book’s release the first time around:

But Prisms never last, and Guile knows exactly how long he has left to live: Five years to achieve five impossible goals. But when Guile discovers he has a son, born in a far kingdom after the war that put him in power, he must decide how much he’s willing to pay protect a secret that could tear his world apart.

The Blinding Knife is out now in hardcover, also from Orbit (both US and UK). The trade paperback edition of The Black Prism will be released July 23, 2013.

The Blinding Knife is inching up my TBR mountain quite rapidly, so expect it to feature on here sometime in the (hopefully) near future.