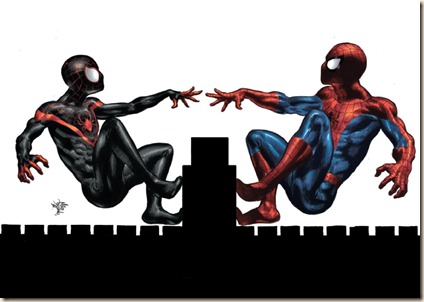 I’ve been doing a fair bit of comics-reading the past couple of weeks, but I haven’t been reviewing much. Therefore, I’ve decided to clump some of them together. This time, as the title may suggest, I deal with some Spider-Man series: Ultimate Comics: Spider-Man Vol.2, Spider-Men and Avenging Spider-Man Vol.1. A mixed bag, but overall some good stuff on offer for fans both new and old. 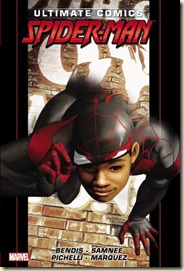 A brand new chapter in the saga of Miles Morales, the all-new Ultimate Spider-Man! The new Ultimate Scorpion is introduced! Still discovering the limits of his skills and powers, Miles must learn how to be a hero from... Peter Parker?

In this second volume of the post-Peter Parker Ultimate Universe, Miles Morales is still figuring out how to actually be the new Spider-Man. He’s had the nod from the Ultimates, who also gave him a pretty cool new outfit (something he realises needs washing a lot). 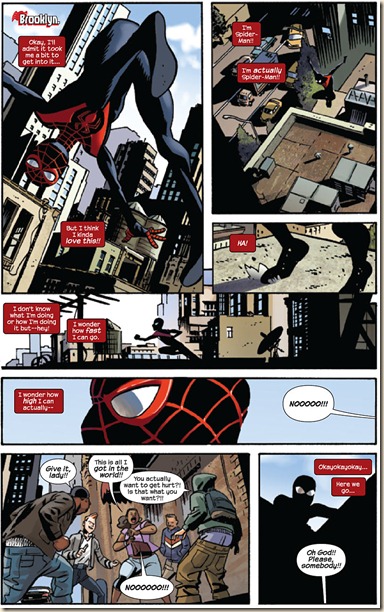 The main thrust of this book is his continued exploration of his powers, as well as his continued struggle to juggle his normal life (at a boarding school) and his family life. Mostly, though, he seems to be having a blast, figuring out his limits. 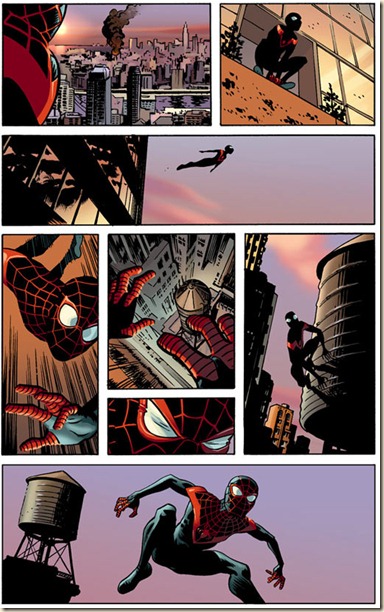 His uncle Aaron, though, has guessed what’s going on and what has happened to Miles, and has decided to make himself a part of Miles’s life, and isn’t above blackmailing him. Miles must also face off against the Scorpion, a crazed criminal boss from Mexico, who has come to New York seeking out Aaron for retribution. It’s not pretty, but there is a ton of action.

Perhaps too much action, actually. I think more time could have been spent on Miles and his attempts to balance his life as a school kid and son, and being Spider-Man. There is some of this, of course, and that includes lots of nice touches – this is a a modernized version of the Spidey origin story, basically: he’s at a special boarding school, has a smart phone, and so on. It’s quite well done. I like his parents, too – they feel very natural, dealing with a young teenager going through his own… Issues. 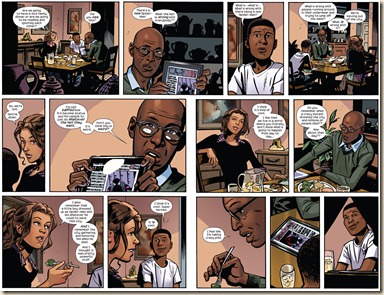 The artwork in final issue is my probably my favourite, but I also have a soft-spot for Pichelli’s.

Generally speaking, a good follow up to the first collection, and this continues to be a series I look forward to continuing with. 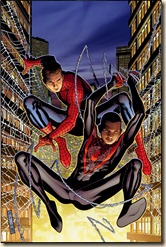 It’s the ULTIMATE AMAZING SPIDER-MAN EVENT OF THE YEAR, as Spider-Man comes face-to-face with... Spider-Man! Can even Peter Parker and Miles Morales – the Spider-Men of two worlds – defeat Mysterio, the Master of Illusions? And what happens when Miles encounters an older, wiser version of his inspiration, Peter Parker? Guest starring Nick Fury and the Ultimates!

Overall, this isn’t a bad comic. I do think it’s a little too gimmicky, though. Given how much Spider-Man and Peter Parker history it goes over, I think it may probably only be a must for real Spidey-fans, who are familiar with the long back-story of the various Spider-Man related series (as well as Ultimate Comics: Spider-Man pre- and post-Death of Spider-Man story arc). I knew some of it, of course, but I don’t think it had as much effect on me as it could have if I’d read a whole bunch of Spider-Man comics. 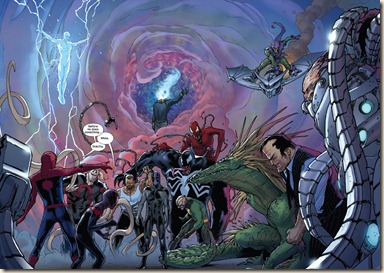 I chuckled a few times, as there are some moments when the two Spider-Men are getting familiar with each other, and as other people get used to the idea of Peter Parker, grown-up, back in their lives (even if temporarily). 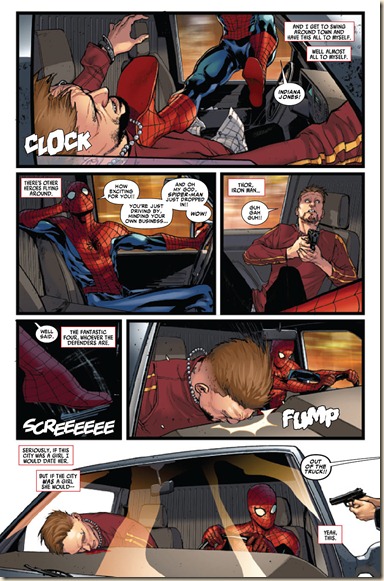 Mainly, though, I enjoyed the artwork: Pichelli is a superb artist, in my opinion; able to keep things fresh and bright, filled with nice details and small touches throughout to keep us looking at the panels. Bendis’s story isn’t bad, either, but... Well, I’ve read much better Spidey stories.

This was, ultimately, a novelty and sadly a tad thin in the end. One for die-hard Spidery fans, but perhaps that’s it.

Avenging Spider-Man Vol.1, “My Friends Can Beat Up Your Friends” 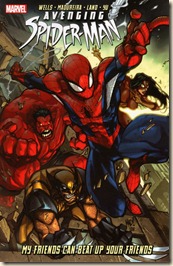 A brand new Spider-series that teams the wall-crawler with some of the greatest heroes in the Marvel Universe! Spider-Man and new Avengers teammate Red Hulk kick things off by taking on a Moloid army during the New York Marathon. Spidey and Rulk raise and lead an underground army in this action packed extravaganza – but when Red Hulk falls, only Spider-Man stands in the way of the Subterranean invasion of Manhattan!

Saving the best for last, we move on to Avenging Spider-Man. This series was always meant to be one that focused on team-up stories. The first three chapters feature Spidery’s quite hilarious team-up with Red Hulk (and, in a way, Mayor Jonah Jamieson); the fourth is with Hawkeye, offering quite an amusing intro for the marksman; and the fifth is a surprisingly heart-warming story featuring Captain America. 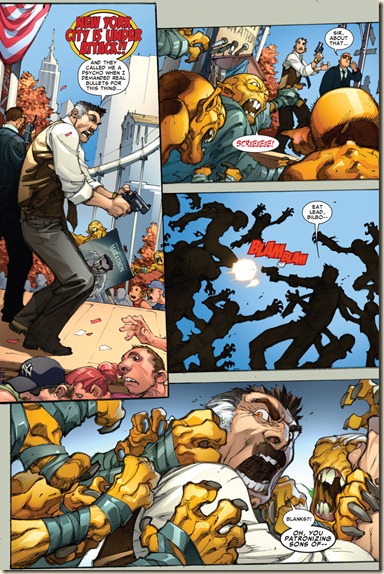 The Red Hulk issues had me laughing out loud a couple of times. It’s filled with amusing quips, asides, background details and more that had me at least smiling all the way through. There story is pretty crazy, featuring a lot of bizarre underground shenanigans, as the Moleman and his little goblin-esque minions capture the Mayor during the start of the New York City Marathon. All is not as it seems, however, as something else – something bigger – has been pulling the strings, and wishes to come in and taken over the land above and below. A great introductory story-arc for this series. 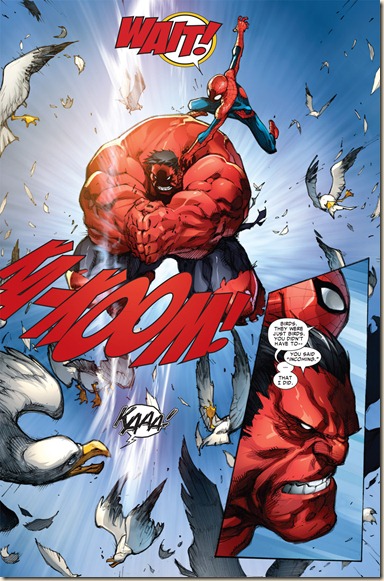 In chapter four, Hawkeye is pretty arrogant. I haven’t had much experience with this character beyond the Avengers Assemble movie, and a few other issues here-and-there, in which he is part of a larger ensemble cast or peripheral at best. The issue starts as a simple team-up, with Spider-Man having to suffer Hawkeye’s constant bragging and posturing (as well as a moment of honest vulnerability as he explains why he is constantly training) as they are sent on a mission. It morphs, however, into a very good ending, in which Spidey shows readers why many consider him the heart of the Avengers team. (I thought it was very touching, actually.)

The final issue is a heart-warming story with the Avengers, but really focuses on Spidey’s relationship with Captain America. Again, we’re shown the role Spider-Man plays as team mascot and heart. Peter helps Cap loosen up and remember (fondly) some of the more nerdy interests and passions of his youth. This was a really good issue, with some good action-scenes, but what really made it for me were the sweet and endearing final couple of pages.

The issue marries some very good, zany humor with a good amount of depth. It’s not too nuanced, but there’s an obvious love for the characters and medium on display throughout this book. I think it works really well, actually, making this not only a a great Spider-Man series, but great series overall. I’m really happy I picked it up.

(The sixth issue of the series is a tie-in to the “Omega Drive” storyline that was also in Greg Rucka’s The Punisher and Mark Waid’s Daredevil – which is how I came across Avenging Spider-Man in the first place.)