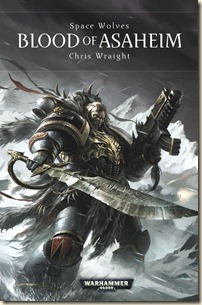 Chris Wraight, one of Black Library’s rising star authors, has carved out a bit of a niche for himself: the Space Wolves (my favorite loyal Space Marines). Ever since Battle of the Fang, I’ve been interested in everything he writes featuring the Sons of Russ. Here’s the synopsis for his latest novel featuring the feral Astartes:

After half a century apart, in service to the Deathwatch and the Chapter, Space Wolves Ingvar and Gunnlaugr are reunited. Sent to defend an important shrine world against the plague-ridden Death Guard, the Grey Hunters clash with the pious Sisters of Battle, who see the Space Wolves as little better than the enemy they fight. As enemies close in around them and treachery is revealed, Gunnlaugr and his warriors must hold the defenders together – even as hidden tensions threaten to their the pack apart.

Blood of Asaheim will be published by Black Library in March 2013.