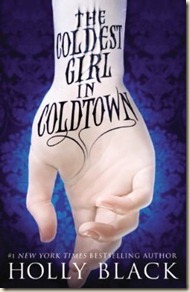 I have never read anything by Holly Black, sad to say. I have no idea why – a number of my friends have sung her praises. And, indeed, her novels all sound pretty cool. With her latest novel, to be published in September 2013, I may well finally address this oversight.

The Coldest Girl in Coldtown has been described as a “story of rage and revenge, of guilt and horror, and of love and loathing”. Here’s the synopsis:

Tana lives in a world where walled cities called Coldtowns exist. In them, quarantined monsters and humans mingle in a decadently bloody mix of predator and prey. The only problem is, once you pass through Coldtown’s gates, you can never leave.

One morning, after a perfectly ordinary party, Tana wakes up surrounded by corpses. The only other survivors of this massacre are her exasperatingly endearing ex-boyfriend, infected and on the edge, and a mysterious boy burdened with a terrible secret. Shaken and determined, Tana enters a race against the clock to save the three of them the only way she knows how: by going straight to the wicked, opulent heart of Coldtown itself.

Also? How cool is that cover? Very atmospheric and… well, chilling.

The Coldest Girl in Coldtown will be published in the US by Little, Brown Books for Young Readers, and in the UK by Indigo (an Orion Youth imprint).