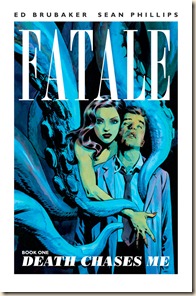 In modern times, Nicolas Lash stumbles upon a secret that will lead him down the darkest path imaginable… to a seductive and ageless woman who’s been on the run since the 1930s.

And in 1950s San Francisco, reporter Hank Raines crosses paths with that same woman and gets caught in a vicious triangle between a crooked cop and a man who is more monster than man.

But who is Josephine and what is her secret? And how many men will die and kill for her?

Brubaker and Philips’s Fatale is an interesting, if flawed blend of noir-ish thriller and horror suspense and weirdness. The series has enjoyed plentiful good and middling coverage in all comic-related corners of the internet. I’m not really sure I can add much to the discussion, to be honest. After finishing it, I found I had very little opinion on it – positive or negative.

The story is fine: there are corrupt cops; a rash of strange, “cult killings” all over San Francisco. This first volume follows a number of slightly-muddled story-threads, which all lead up to an underground confrontation with a cult-leader (who is a lot more than he appears to be). Josephine appears to have a strange, powerful allure for apparently all men she encounters – and, of course, a mysterious past. Despite my interest in such stories, though, Fatale never really managed to excite my interest beyond the cursory.

The artwork is good, and certainly enhances the atmosphere and noir-feel to the story, but it is sadly not a style I would spend much time lingering over.

I think Fatale would have worked much better as a prose-novel. It was too fast-paced near the end, despite an almost agonizingly-slow build up at the start. Despite my qualms and reservations, it will be interesting to see how the series develops in the second volume, but I wouldn’t rush to buy it. (Luckily, I recently got Volume 2 through NetGalley, so I could get to it a lot quicker than I otherwise would have done).

In conclusion, then, and coming from a huge fan of Brubaker’s other work – specifically his initial run on Marvel’s Captain America (and Winter Soldier), Gotham Central (review coming soon), and also Batman: The Man Who Laughs – I’m sad to say that this was a massive disappointment.

I borrowed Fatale Volume 1 from the local library.