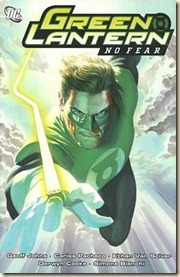 Hal Jordan is back from the dead – now watch as he re-establishes his life as a pilot. Standing in his way, though, is one of the deadly Manhunter androids followed by the Shark.

After reading Blackest Night, its prequel Agent Orange, and Green Lantern: Rebirth, I’ve finally got around to reading the first collection of Geoff Johns’s pre-New 52 run on Green Lantern proper. And I was… well, not exactly bowled over, but nor was I exactly disappointed. It’s a fun book, and I’m sure it would be a good buy if you’re a fan of the character, but haven’t managed to read that much of his back-story or pre-New 52 adventures.

The first four pages of the book are a blitz-through of the story of how Abin Sur selected of Hal Jordan to be his successor. There’s a mention of the yellow impurity, which was properly explained in Green Lantern: Rebirth. The main story begins, as Jordan is trying to get a new job, back in the US Air Force. He’s struggling a bit, given that the guy he clocked to get his initial discharge is now heading up the program and division he would have to join to get re-upped. Awkward, for sure… 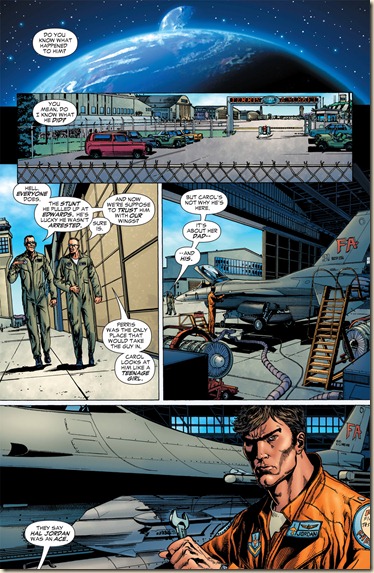 The next two chapters focus on a rogue “Manhunter 2.0” and Hal’s attempt to put it down. As it turns out, Manhunters are not so keen on humans… 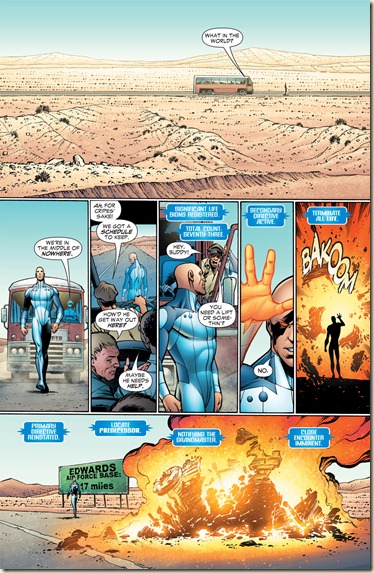 The book is a little uneven beyond this, as we’re informed that an entire, new Green Lantern Corps is being called up, after the ravages of Parallax, which at least means they don’t know what Jordan became and what he did when he was possessed. Very strangely, at the start of one chapter (#4), what appears to be an alien, a gray, stepped out for a cigarette and is hit by a military jeep... 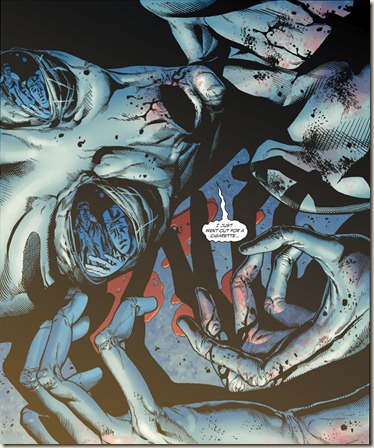 There’s a lot of cryptic information and nuggets throughout this book, but it didn’t really feel like it was going anywhere. Jordan goes to see Hector Hammond. Who has a huge head… I wasn’t entirely familiar with the character, but he features in the rest of the book.

In Chapter 5, we get… SHARKS!! Big, f**k-off evil ones. In another example of characters evolving “millions of years” in one go by an apparent freak accident… It gets to the point when it feels a bit like a narrative crutch. Thankfully, we do get an explanation for all this rampant evolution. And also a huge fight against a shark-beast that Jordan apparently has clashed with in the past.

Also, while reading this book, I was initially very confused about the creepy little German-speaking gremlins that kept cropping up at seemingly random moments…

In the final chapter, everything is finally tied up, and the German-speaking gremlins are explained. This was really weird. Quirky, not necessarily in a bad way, though. They appear to be experiment-obsessed aliens who like to dick around with others species’ genetics, technology, and evolutionary stage. 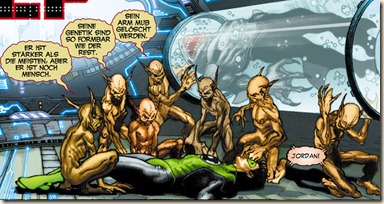 The artwork throughout is strong, as you can see from the samples included here. It’s not particularly stand-out, but it serves its purpose well – Johns’s story is well-realised. It was not, however, anything I felt particularly strongly about.

“No Fear” is not a bad book, overall, nor is it a bad start to a newly re-booted series. It’s a little bit unfocused, but at the same time it is starting to show signs of the quality I’ve seen in later books and the New 52 Green Lantern (which is the reason I decided to pick this up in the first place). At this point, pre-New 52 Green Lantern isn’t nearly as strong as the first two volumes of the New 52 re-boot. I’m not sure it’s as good for new readers, either. That’s a lot of dissembling after I said it was a good book… But, in view of the series at large, “No Fear” just isn’t as strong as other collected editions or story-arcs. It’s rather quirky, though.

Will I read volume two and beyond? Absolutely. I’m just not in as much of a rush to do so as I was after reading Blackest Night and the New 52 Green Lantern. 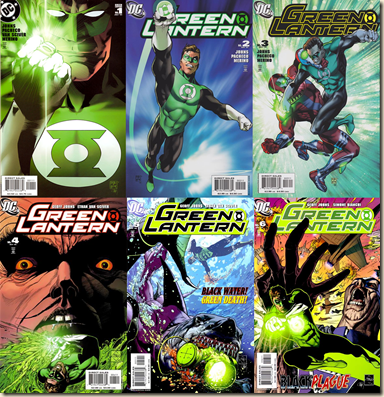