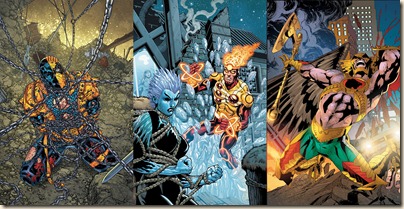 It’s spring-cleaning at DC once again, with six more titles getting the axe. From the initial New 52 series, we see the end of Deathstroke, Fury of the Firestorm, and The Savage Hawkman – all with their 19th issues.

From the “second wave” of New 52, we see Ravagers cut at issue #11. And, perhaps more depressingly in terms of longevity, Sword of Sorcery and Team 7 – both of which were only launched in September 2012, will end with their seventh issues. 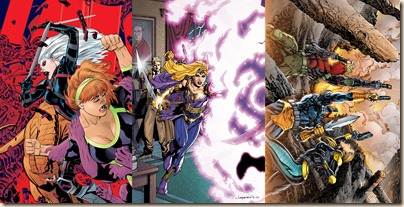 Of these, I’ve only read Deathstroke and Savage Hawkman, both of which I’ve had mixed feelings about, so I’m not exactly sad to see them go. Fury of Firestorm I was actually quite interested in, seeing as it was co-written with Gail Simone. I’ve decided to pick up the collected editions, once they are all released. I also recently bought the five-issue (2004-7) run of the character, written by Dan Jolley with art by ChrisCross, as part of this week’s ComiXology Black History Month Sale. I’m sure I’ll pick up the collected editions of the other New 52 cancelled series in the future.

In related news, DC has also announced two new titles that will be coming soon. Taking cues from contemporary American politics, these two titles – The Greem Team and The Movement – could be quite interesting, if they are done well. The fact that Gail Simone is writing The Movement certainly bodes well, though. 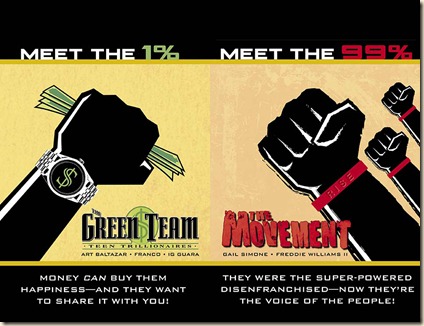 The two books were announced over on Huffington Post (which was interesting in itself), and Bryan Young was able to get Gail Simone on the record about The Movement:

“It’s a book about power – who owns it, who uses it, who suffers from its abuse. As we increasingly move to an age where information is currency, you get these situations where a single viral video can cost a previously unassailable corporation billions, or can upset the power balance of entire governments. And because the sources of that information are so dispersed and nameless, it’s nearly impossible to shut it all down… It’s an adventure story, but it really isn’t about mad scientists and jewel heists, it’s more about the injustices that can affect real people’s lives, just tarted up in costumes and superpowers.”

Sounds very Occupy Wall Street. It will be interesting to see what the team comes up with.

The tag-line for The Green Team – “Teen Trillionaires” – makes me a little worried, though. I’ve never been keen on books that feature kids as heroes or so centrally – there is a tendency, that I’ve experienced, at least – that the characters are invariably terribly written. Perhaps the only exception that I’ve been reading lately is Batman & Robin, in which Damian (Robin) is actually a complex, nuanced and compelling character (I’ve read up to #10).