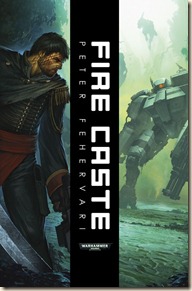 In Fehervari’s debut novel for Black Library, he pits the Imperial Guard against the alien Tau Empire. I’d not heard of Fehervari before this novel was announced, so I was quite surprised to hear he’d been given a full novel contract. I’ll certainly be interested to see what he can come up with in the Warhammer 40,000 setting. Fire Caste will also be the first novel I read featuring the Tau, and only the second story overall. (For some reason, they don’t seem to have been particularly popular with BL authors…) Here’s the synopsis:

In the jungles of the Dolorosa Coil, a coalition of alien tau and human deserters have waged war upon the Imperium for countless years. Fresh Imperial Guard forces from the Arkhan Confederates are sent in to break the stalemate and annihilate the xenos. But greater forces are at work, and the Confederates soon find themselves broken and scattered. As they fight a desperate guerrilla war, their only hope may lie in the hands of a disgraced commissar, hell-bent on revenge.

Fire Caste will be published in March 2013 by Black Library.