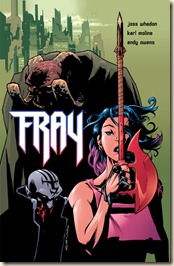 Hundreds of years in the future, Manhattan has become a deadly slum, run by mutant crime lords and disinterested cops. Stuck in the middle is a young girl who thought she had no future until she learns she has a great destiny. In a world so poisoned that it doesn’t notice the monsters on its streets, how can a street kid like Fray unite a fallen city against a demonic plot to consume mankind?

It took me altogether too long to get around to reading Fray. As a long-time fan of basically everything Joss Whedon’s written or created, it’s odd that it took as long as it did. Better late than never, though, and Fray was an absolute blast. I haven’t had this much fun reading a comic in a good long while. I thoroughly enjoyed this book.

Fray takes Whedon’s Buffy The Vampire Slayer mythos, and telegraphs to the far future, building on the basic foundations of what we’ve come to learn and know from the TV series, Angel, and the comic book continuations. It introduces us to Melaka Fray, a thief in future New York, who also happens to be the Slayer. Unlike previous slayers, however, she has no idea whatsoever of her destiny. Not even an inkling.

I thought some of what Whedon wrote in the foreword was interesting, and to quote it will help with some context for the review. When he was younger, Whedon writes, he was annoyed by the fact that, “frustratingly, there weren’t that many” girls in comic books. “At least in the Marvel universe, where I made my nest, there were very few interesting girls young enough for a twelve year old to crush on.” Fray came about from this childhood wish to incorporate more ass-kicking young women into comics, and also out of a need to move away from Buffy and Angel... Sort of. To avoid continuity issues, and because he believed people would only be interested in he wrote if it was something Slayer-related, Whedon decided to set this book well into the future, but using the same mythology. ("The rich get richer, the poor get poorer, and there are flying cars.") He had one stipulation for the artwork:

Anyway, back to Fray, which really doesn’t suffer any of these problems… We join our heroine as she’s completing a job, which hasn’t exactly gone well for her. The first chapter does an excellent job of introducing us to Fray’s life as a thief and occupant of the lower levels of future Manhattan. We’re introduced to the few people in her life – for example, the excellent and endearing Loo, a young kid from the neighborhood who Fray treats as a little sister.

Then, at the very end of the first chapter, and moving on into the following, we meet Fray’s Demon Watcher (things have changed a bit since the 21st Century), Urkonn, who Mel refers to as a “mutant goat”. He’s a little bit like the demon Giles gets turned into by Ethan Rain, in “A New Man” (Season 4, Episode 12) He’s also not really her watcher, because the Watcher’s Council has gone a but bananas over the years, after the previous slayer, perhaps a century or so ago, took all of the world’s demons away. They suddenly lacked purpose, after centuries of a sacred duty. Urkonn tells Melaka the history of the Slayer and the Watchers Council. Then refers to a rather disturbing event from chapter one:

“You met your watcher yesterday.”

“Did not one come to you, call you the chosen one?”

“Nobody ever called me OH MY GOD you mean that one that set himself on FIRE?”

“But he set himself on fire!”

“HE SET HIMSELF ON FIRE!”

“Maybe he was cold.”

As I said, Loo is fantastic. She’s a great addition to pretty much every scene in which she appears, and is just one element of the story that adds a levity to proceedings. For example:

The artwork throughout is pretty awesome. [Sadly, I wasn’t able to find many preview images on the internet to include in this review. Probably a good thing, though, as there were so many I wanted to share, that I probably would have just ended up spoiling some of the best moments for you.] It’s highly dynamic during the action scenes, always eye-catching, and enhances the story in pretty much every way without ever distracting readers from what’s actually happening with the plot. There are great facial expressions, too, adding nuance to many scenes, and there is a great attention to detail on every page.

To return to Avengers thoughts, I’d really like to know if one of the beasties at the end was a precursor for the flying mega-snakes we saw at the end of The Avengers…

Ultimately, Fray has all the hallmarks of a Whedon tale: plenty of action, a good amount of humor, lots of witty dialogue, and a dash of tragedy, all wrapped up in a type of coming-of-age tale. As with everything else he’s worked on, I also found this incredibly addictive. There are plenty of surprises, too (never saw the end of Chapter Three coming, for example), which should keep readers guessing and on their toes right up until the very end.

There really should be more Fray books in the works. Please? (I have no knowledge of any plans at the moment.) The final page of this book, not to mention some loose ends in the story, suggest there should be plenty more scope to write more in this future-Slayer setting. Almost every issue went back for a second printing. The Buffy and Angel comics (also published by Dark Horse) continue to sell well, not to mention spawn multiple spin-offs and mini-series. So why not more Fray?

Speaking of, though, a quick Google search unearthed this tidbit, which suggests that Fray does, indeed, turn up in the future. From a 2011 post on CBR:

Speaking of crossovers, one fan asked about Whedon’s experience in bridging Buffy with his future Slayer spin-off, ‘Fray,’ during Season 8. “That was actually some of the easiest and most fun stuff I got to do,” said Joss. “Those two worlds being so separate and so connected made writing it pure joy. Basically, all of the Buffy comic has been affected by ‘Fray,’ which I wrote thinking, there’s no way this will ever affect Buffy. It’s 200 years in the future, so I’m totally safe.”

I must get caught up with Season 8! Very highly recommended. 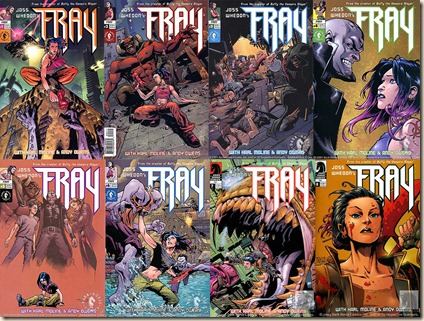