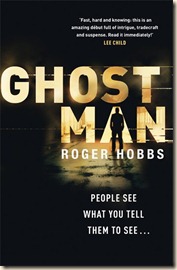 An exciting new voice in thrillers

But I only have 48 hours, and there’s a guy out there who wants my head in a bag.

This is a very promising debut novel. Set in the world of con-men and casino heists, Hobbs introduces us to a “ghostman” – the man you call if you want to clean up a heist gone wrong, or really any other criminal activity that requires subtlety and no fingerprints. The novel is fast-paced, highly-detailed, and very realistic. Despite some minor niggles at the beginning, this was a thoroughly engrossing, addictive thriller.

A casino robbery in Atlantic City goes horribly awry: one of the heist-team dead in the parking lot, another injured and on the run, a mysterious shooter, and $1.2 million in freshly printed bills in the wind. The man who orchestrated it, Marcus, calls in a favor from a ghostman, who occasionally goes by the name of “Jack” (as he does in this novel). Jack is an enigma, even to the people he works for. Nobody knows his true identity. He’s in his mid-thirties and lives completely off the grid. He does only as he pleases and is almost impossible to get in touch with. Unless you’ve worked with him before, in which case you have a slight chance of tracking him down.

You see, Jack and Marcus go back a ways. For example, to a job that went spectacularly wrong in Malaysia, partly because of a mistake that Jack made. It was early in his career, and he slipped up. Marcus uses this as leverage to get Jack to tidy up the mess in Atlantic City, which he grudgingly does.

Within hours of landing in Atlantic City via private jet, Jack is confronted by an FBI agent, and quickly discovers that all is not well in the city. Not well at all. What happened to send the heist completely off the rails? What happened to the surviving member of the team? Was it a set-up? Is Jack’s life in danger? If so, from whom? All of these questions will bounce around Jack’s brain as he tries to get to the bottom of the events that morning in the casino parking lot.

Jack has only forty-eight hours until the twice-stolen cash will literally explode (there’s a really good bit of explanation/exposition about why this will happen).

That’s a brief run-down of the context for the novel. There’s a whole lot more that happens, and Jack is pulled into a veritable snakes-nest of double-crossing, treachery, and bad histories. He’s a great guide, though, and through his eyes Hobbs gives us a great overview of a whole host of criminal behaviour and considerations. The author offers a lot of detail, too, which is both a blessing and a curse.

The level of detail is a boon because it adds a considerable amount of depth, background and authenticity to the novel. At the same time, and this really only accounts for the first 60-pages or so, it can also feel a bit like he’s giving us info-dumps. It feels, at times, like everything is explained and described, even if it really doesn’t have to be. This gives the first few chapters a slight over-written quality, which made me a little wary. That being said, the novel quickly gets going, and these concerns were left in the dust – a combination of a fast-moving plot and Hobbs’s excellent prose just pulled me through.

The premise is, after all pretty cool. And, to be honest, many of the info-dumps were genuinely interesting and well-written (I got the feeling that Hobbs rather enjoyed the research for this novel, which might explain the level of detail in some instances).

All of Hobbs’s characters are well-rounded and written, and even those who only feature on the periphery or fleetingly are believable. Jack’s very nature precludes much background, but Hobbs manages to pull this off, and I still felt I got to know him enough to care about his fate. I also liked that the protagonist was aware of his own limitations: he has plenty of skills and considerable knowledge, but he can’t do everything by himself. He’s almost self-deprecating at times. He is also just a tad pretentious. As is common for the thriller genre, he has a quirk, something that makes him unusual and stand out: for pleasure, he translates the classics, into multiple languages. I thought this was a tad pretentious, but it’s not exactly prominent in the story, so didn’t have any impact on my enjoyment (or the plot). Although, that being said, I did learn a nice bit of latin: “Flectere si nequeo superos, Acheronta movebo”, which according to Jack means, “If you can’t reach heaven, raise hell.”

I was worried early on about the author’s writing style. As well as the extra-detailed approach at the start, at other times the prose and writing felt a little artless. For example, in the first 40 pages, we’re informed three times that he started his life in crime at 14 years old – each time as if it’s new information (a very strange oversight by the author and editor, actually). Nevertheless, I quickly fell into the book’s narrative rhythm, and realised I was burning through the pages at a pretty good clip.

The momentum of the last 200 pages is relentless, and it was very difficult to put down. The ending is well-executed and satisfying. Things were tied up rather neatly, and I liked that Hobbs didn’t go for something I’d been expecting all along – he is perhaps saving it for a later novel (sorry for the cryptic, but it’s to do with his mentor). 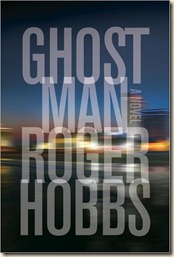 There is a lot to recommend here, especially if you like detailed thrillers that are fast-paced and well-written. As a debut, this is especially strong. With a bit of tightening, Hobbs’s second novel could be quite awesome.

Overall, this is definitely recommended. A great new talent in the genre, and one who shows plenty of skill and imagination to grow into a real force. I can’t wait for his next book.

Ghostman is published by Doubleday in the UK on February 14th, and by Knopf in the United States on February 12th (artwork above).