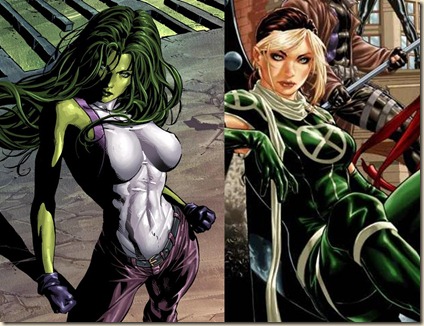 On February 7th, Marvel Entertainment and Hyperion Books announced that they were teaming up to release two novels set in the Marvel Universe. I’m not entirely sure how I feel about this…

Unlike previous books, however, these will not be mere novelizations of existing Marvel storylines (for example, Civil War). Rather, these will be “two action-packed novels featuring… strong, smart heroines seeking happiness and love while battling cosmic evil.” Both of the novels are scheduled for release in June 2013 – one will feature the Avengers’ She-Hulk, the other the X-Men’s Rogue.

Also different from other Marvel novels in the past, these seem to be aimed for the “chick-lit” market (for want of a better term). The fact that they’re not your typical “lad-lit” or super-hero action-adventures shows some welcome out-of-the-box-thinking from Marvel. The idea of this genre with added superheroes… is kind of intriguing. The plots do sound just a tad derivative, though, and whoever wrote the synopses basically had one general premise in mind. (There is much juggling and navigating of normal-life challenges and relationships…)

THE SHE-HULK DIARIES, by MARTA ACOSTA 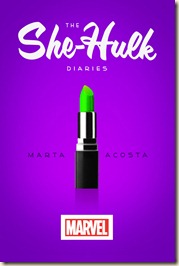 In The She-Hulk Diaries, we will follow Jennifer Walters, a.k.a. “She Hulk”, who shares her cousin Bruce Banner’s ability to transform into a big, green hero of incredible power. In this novel, Walters

“juggles climbing the corporate ladder by day and battling villains and saving the world by night – all while trying to navigate the dating world to find a Mr. Right who might not mind a sometimes-very big and green girlfriend.” 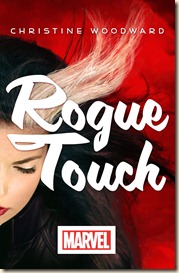 The second novel features one of the most popular X-Men characters, Rogue, the power-draining/-stealing young mutant (best known either as Gambit’s some-time-lover, or the character played by Anna Paquin in the first X-Men movie trilogy). Here’s the synopsis:

A young woman trying to navigate the challenges of everyday life and romance – except that her touch is deadly.

After accidentally putting her first boyfriend in a coma, she runs away from home where, she meets the handsome and otherworldly James and sparks fly. Like Rogue, however, James’ life is hardly simple. To elude his mysterious and dangerous family, James shaves his head, and dons all black. Stealing a car, they head out on the highway and, eventually, Rogue has to decide whether she will unleash her devastating powers in order to save the only man alive who seems to truly understand her.

Christine Woodward… was a little tricky to track down on the internet. It’s possible she’s written a book on gemstones, a religious tale for young adults, or her real name may be Nina de Gramont. It was not clear to me… (Anyone?)

Hyperion’s Editor-in-Chief, Elisabeth Dyssegaard, had the following to say about the deal:

“Marvel has had tremendous success with recent hit movies and we think it’s a great time to explore what happens to super heroines when they are dropped into traditional women’s novels.”

Ruwan Jayatilleke, Associate Publishers/SVP, Marvel Entertainment had this to say about the project:

“It’s exciting to see Hyperion bring two of our most beloved female super heroes, Rogue and She-Hulk, to life in ways you’ve never seen before. Whether you’re a long time fan of Marvel or new to our Super Heroes, these novels deliver exciting stories that will capture your imagination.”

In some character-related news, X-Men Legacy #266 (published May 9th, 2012) featured both She-Hulk and Rogue, duking it out as part of the Avengers vs. X-Men Event: 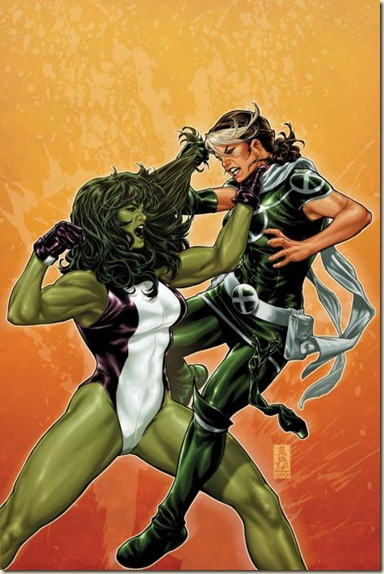 And, an image from inside the comic, when the two are fighting and Rogue has absorbed some of She-Hulk’s power: 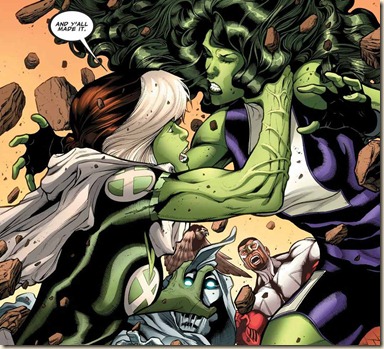 This probably does not happen in one of the two new novels… Pity.