Teresa Frohock Reviews “The Blade Itself” by Joe Abercrombie (Gollancz/Orbit) 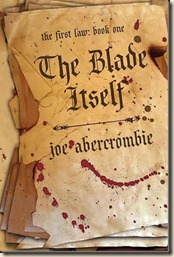 I have to be brutally honest here: I quit reading genre fiction for about ten years, then I wrote and published a fantasy novel. There’s a certain irony to all of this that I appreciate, because I have strange sense of humor, and you would do well to keep that odd humor in the back of your mind as you read this review. The only reason I mention it is because I think it’s important that you understand that I don’t know Joe Abercrombie. I have never met the man or even heard of him until I was bumping around online and came across an article by Leo Grin, who described Abercrombie’s novels like this:

“Think of a Lord of the Rings where, after stringing you along for thousands of pages, all of the hobbits end up dying of cancer contracted by their proximity to the Ring, Aragorn is revealed to be a buffoonish puppet-king of no honor and false might, and Gandalf no sooner celebrates the defeat of Sauron than he executes a long-held plot to become the new Dark Lord of Middle-earth, and you have some idea of what to expect should you descend into Abercrombie’s jaded literary sewer.”

Well, I thought. I would certainly read that.

It was almost a year before I acquired a copy of Abercrombie’s first novel The Blade Itself, but I did and I read it and here we are, wallowing together in a jaded literary sewer, which I, for one, found quite appealing.

The Blade Itself is an epic fantasy, which plays out in an almost recognizable world with place names that don’t hurt my eyes. Angland could very well be England, Adua has an almost French feel to the court, and Gurkhul sounds foreign and exotic while purling up nicely in a throaty growl should I feel the need to pronounce it.

The essence of the story is this: Logen Ninefingers, a barbarian with a conscience, is tired of killing. Unfortunately, he can’t leave his murderous past behind, because Bethod King of the Northmen has his sights on conquering the southern lands. Logen goes south to find the Magus Bayaz, and from there Abercrombie spins a tale of old allegiances, betrayals, and coming war. This seemingly simple premise becomes wonderfully entangled with several threads of intrigue spiraling out to carry the reader into the lives of the people most affected by Bethod’s actions.

Usually when reading an epic fantasy, I find myself floating and feeling a bit lost during the first chapters, but I never experienced that with Abercrombie’s story. He holds the tale together by limiting himself to six points of view: Logen, Jezal dan Luthar, Inquisitor Glokta, the Dogman, Collem West, and Ferro Maljinn. The beauty of these characters is that Abercrombie knows them so well he conveys their diverse personalities immediately with his prose. The reader is firmly situated in the character’s mind at the beginning of each chapter, and there is never any doubt as to who is telling which part of the story. 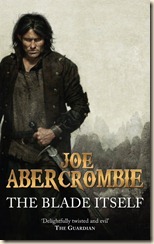 That’s important for a story with this many plotlines. Abercrombie holds it all together brilliantly, building the story slowly and giving the reader ample time to become entrenched in one plot before he spins out another with sharp prose and black humor. I couldn’t help but think that if Joseph Wambaugh decided to write fantasy, The Blade Itself is what it would look like.

This complex plot is cast through the eyes of Abercrombie’s characters, and these characters are what make The Blade Itself so invigorating. I didn’t like all of them but none bored me. Logen and the Dogman were colorfully rendered; they simply were not my favorites. Collem West is portrayed as a good man, who succumbs to the unremitting stress of his career and must acknowledge his own dark nature. West’s part is handled exceptionally well along with that of his sister, Ardee, who is the quintessential alcoholic, right down to her manipulation of everyone around her.

Then there is Ferro, who I would describe as the classic kick-ass heroine. I am going to make a total leap of faith and hope that she will become more interesting as the story develops in subsequent books. In The Blade Itself, she exhibits all of the impulse control of a hyperactive three-year-old on a sugar high. However, I can honestly say that I have encountered women (and men if we are to include the fairer sex) like this, so I’m going to roll with it. She is the only the character that seemed to lack the nuance that Abercrombie gives to the rest of the crew, but that interpretation could simply be based on the fact that I’m rather jaded about the whole wonder-woman-warrior-thing.

My favorite characters were Jezal dan Luthar and Inquisitor Glokta.

I think it was because these two men are mirror images of one another. Jezal is a reflection of what Glokta once was – a dashing officer out to seek advancement through winning the Contest, a major fencing competition. Jezal is the kind of man whose handsome form and fortunate birth have played a large part in his advancement. He sees himself as infallible, a brilliant officer, a man of the world, and he would be utterly obnoxious if it weren’t for the way in which Abercrombie handles Jezal’s dialogue.

Jezal is quite witty in his own mind, but when he speaks, he hardly ever gets past, “Erm,” or “Um,” before he’s interrupted someone with quicker wit or more confidence. Jezal’s rapid fire thoughts are rarely articulated. The longer I read, the more I admired the way Abercrombie handled Jezal’s scenes, because the self-image that Jezal has of himself is not what others see, especially Inquisitor Glokta, who thinks Jezal is something a buffoon.

Glokta is insightful enough to recognize in Jezal aspects of himself as a younger man, but two years in the Emperor’s prisons left Glokta physically broken. However, his determination and endurance had me absolutely rooting for him. He was, by far, the most astute and clear-eyed of all the characters. Glokta sees the world without pretension, sees it right down to its ugly core, and he has developed a black sense of humor with which to deal with his pain and the intrigues that surround him.

One of the novel’s most poignant scenes plays out between Glokta and Collem West. The character development leading up to this scene was extremely well done, and Abercrombie used his material to deftly reveal another layer of Glokta’s personality, one that was both surprising and intimate. The attitudes and interactions between Glokta and West fell together like clockwork, which fairly sums up The Blade Itself.

Some people are only most interested in what’s on the surface, but I enjoy digging a little deeper, even if it means descending into the messiness of real life. If The Blade Itself is a jaded literary sewer, it is one with interesting connections and conduits. At times I felt like I was meandering down a familiar road, then the story would take an unexpected turn or wander down an unforeseen channel, but the sights were familiar and all told, the trip was wholly worthwhile, especially if you, like me, have an affinity for sewers. However, it was the characters that carried the story, and since I believe that to be the hallmark of excellent storytelling, The Blade Itself worked quite well for me.

On the surface, The Blade Itself is an adventure, but if you dig a little deeper, you can be rewarded with satisfying characters and a tightly rendered story. If Abercrombie accomplished this by design, I salute his attention to detail; if he didn’t plan a word and the story rolled forward from his imagination to the page effortlessly, I salute his talent. Either way, he has put together a diverse group of characters and linked them all quite devilishly while driving forward a plot that becomes more twisted as the pages turn. I became so entwined in these fictional lives that I forgot my own for a while, and I don’t know about you, but that’s one of reasons that I read.

Teresa is the author of Miserere, published by Night Shade Books. You can also read my recent interview with her, here.