What Should I Read Next…?

I’m incredibly indecisive when it comes to picking my next read. Usually. There are times, of course, when nothing is going to stop me reading a particular book. (Most recently, that was the case with Peter V. Brett’s The Daylight War, despite my intended wish to mix things up  a bit more… I loved it, so it worked out in the end. Later in the year, it’ll be Scott Lynch’s Republic of Thieves.)

I currently find myself in one of these moments of indecisiveness. Here are the options (followed, after the break, but synopses): 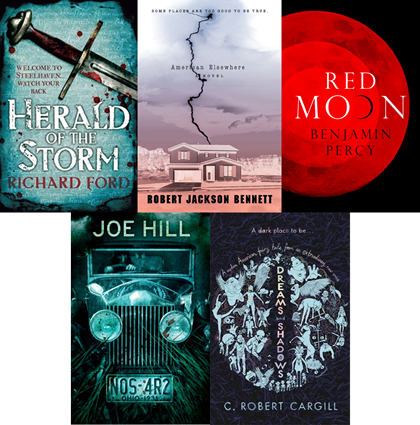 Some places are too good to be true.

Under a pink moon, there is a perfect little town not found on any map.

In that town, there are quiet streets lined with pretty houses, houses that conceal the strangest things.

After a couple years of hard traveling, ex-cop Mona Bright inherits her long-dead mother's home in Wink, New Mexico. And the closer Mona gets to her mother's past, the more she understands that the people of Wink are very, very different...

From one of our most talented and original new literary voices comes the next great American supernatural novel: a work that explores the dark dimensions of the hometowns and the neighbours we thought we knew.

They live among us.

They are your neighbour, your mother, your lover.

Every teenage girl thinks she’s different. When government agents kick down Claire Forrester’s front door and murder her parents, Claire realizes just how different she is.

Patrick Gamble was nothing special until the day he got on a plane and hours later stepped off it, the only passenger left alive, a hero.

President Chase Williams has sworn to protect the people of the United States from the menace in their midst, but is becoming the very thing he has promised to destroy.

So far the threat has been controlled by laws and violence and drugs. But the night of the red moon is coming, when an unrecognizable world will emerge, and the battle for humanity will begin.

An old Silver Wraith with a frightening history. A story about one serial killer and his lingering, unfinished business.

Anyone could be next.

NOS4A2 is an old-fashioned horror novel in the best sense. Claustrophobic, gripping and terrifying, this is a story that will have you on the edge of the seat while you read, and leaving the lights on while you sleep. With the horrific tale of Charles Manx and his Silver Wraith, Joe Hill has established himself as the premiere horror and supernatural thriller writer of his generation.

DREAMS AND SHADOWS takes us beyond the veil, through the lives of Ewan and Colby, young men whose spirits have been enmeshed with the otherworld from a young age.

This brilliantly-crafted narrative follows the boys from their star-crossed adolescences to their haunted adulthoods; and takes us inside the Limestone Kingdom, a parallel universe where whisky-swilling genies and foul-mouthed wizards argue over the state of the metaphysical realm. Having left the spirit world and returned to the human world, Ewan and Colby discover that the creatures from this previous life have not forgotten them, and that fate can never be sidestepped.

Of course, I may ignore all of your suggestions anyway, but it will nevertheless be interesting to see what you would like to feature on the site.

It’s also my 30th birthday this coming Friday, and I’m hoping for some Amazon vouchers, so I can get Kindle editions of the third book in Stacia Kane’s Downside Ghosts series and also Joe Abercrombie’s Last Argument of Kings (have become a bit of a fanboy for this series, now…),* so those will likely follow shortly after whichever choice I make from this selection.

Which would you recommend? If you can find the comments, please do leave your suggestions. (Apparently, some browsers are having a difficult time with the new blog template, but I can’t figure out how to fix this or change it back… Apologies about that.)

* Review of Before They Are Hanged tomorrow.