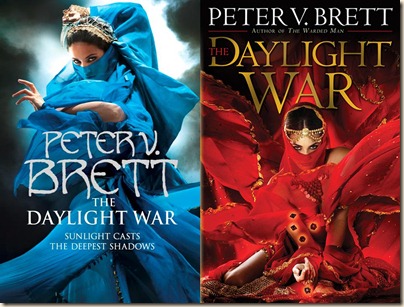 The long-awaited third book in The Demon Cycle

After finishing The Desert Spear, it was not long before I had to dive into The Daylight War. I’d come late to the series, so I hadn’t been champing at the bit quite as much as other fans, but after finishing book two, I could certainly see why people were so very eager. The third book in the series continues to build on the excellent foundations of The Painted Man and The Desert Spear, as the story moves ever forward. This is an addictive, immersive and excellent fantasy novel.

It’s always tricky to review middle or late novels in a series: you want to tell established fans enough to encourage (or, in rare instances, warn) them to keep reading. At the same time, you don’t want to ruin things for newer readers. Therefore, I shall keep this as brief as I can, and keep most discussion of the plot limited to general impressions.

The Painted Man told us Arlen’s story. In The Desert Spear, we got Jardir’s history and the story of his rise to power. In The Daylight War, we get Inevera’s history. We’re shown Inevera’s harsh introduction to life among the dama’ting, after the dice choose her – the first to be chosen in decades who was not a daughter of a dama’ting. Brett does a great job of bringing Inevera’s experiences to life on the page, and not a few of them are unpleasant or harsh. (Also? They have very complex underwear...)

For me, Inevera is one of the most interesting characters in the series: she’s portrayed as the ultimate Machiavelli in the second novel, always whispering in Jardir’s ear about what the alagai hora (prophetic dice carved from demon bones) have told her. In this novel, Brett brings us the story of how she rose from a weaver’s daughter to the most powerful woman in Krasian society.

The way he has done this will certainly please readers who thought Jardir’s backstory took up too much of The Desert Spear: rather than a big chunk at the beginning of the novel, Brett has incorporated Inevera’s story in a far more spread out manner. It is also, sad to say, briefer. There were times when I wished Brett had delved deeper into this or that period of her training, while at others I thought revelations and developments were arrived at too quickly. I loved Jardir’s backstory – I found the character’s rise, and the depiction of Krasian society fascinating – and I had actually hoped for a bit more with Inevera’s story. Nevertheless, the author gives us some key information and context for key events that have already happened in the series, which certainly fleshes out the story even more – especially regarding the dama’ting and how this holy order of Everam’s Brides operates. We also learn of their contempt for the sharum and the Krasian need to fight the demons every night.

“It is the wardwalls, not warriors, that protect the Desert Spear. Until the Deliverer comes again, alagai’sharak is only the pride of men, throwing lives away for victories not worth their price.”

Inevera’s eyes widened at the blasphemy. Soli and Kasaad risked themselves in the Maze every night. Her grandfathers, uncles, and male ancestors going back three hundred years had died in the Maze, as she had always thought her own sons would. It could not simply be the pride of men. “Does not the Evejah tell us that killing alagai is worth any price?”

“The Evejah tells us that obeying the Shar’Dama Ka is worth any price,” Qeva said. “And the Shar’Dama Ka commanded we kill alagai.” Inevera opened her mouth, but Qeva raised a finger and cut her off. “But the Shar’Dama Ka has been dead for three thousand years, and took the fighting wards to his grave. Each night, more men die in the Maze than are born each day. There were millions of us before the Return. Now, less than a hundred thousand, all because of men and their ridiculous game.”

Inevera’s teacher continues, laying out the foolish male need for action and combat:

“Kaji built the Desert Spear with two wardwalls… Neither wall has ever been breached.”

Inevera looked at her curiously. “Then how do demons get into the Maze each night?”

“We let them in,” Qeva growled. “The Sharum Ka opens the gates wide till the Maze is well seeded, then closes them again, trapping the demons in the Maze for his men to hunt.”

I really enjoyed reading about the different perspective on what can basically be described as Krasian society’s raison d’etre: the nightly war against the demons.

We also get to see a different side to Inevera – she’s just as self-conscious and anxious as others, below her steely, confident exterior. She seems to be less prominent in this novel, though, than she was in The Desert Spear. This is probably a result of the ever-expanding story and cast of characters Brett is juggling (very ably, I should point out), which means we can’t always spend as much time as we would like with our favourites.

Speaking of favourites, after the short introduction to Inevera’s past, we rejoin Arlen and Renner, pretty much at the moment we left them at the end of book two. They are still trying to get used to each other, finding a new rhythm. It was, for me, very interesting to see their relationship develop (especially as Renna is not entirely honest with Arlen about her special… ah, training). Arlen and Renna feature heavily in the first half of the novel, and thankfully are never far from the main story’s action. Their relationship has grown deeper, and continues to do so over the course of the novel. They’re actually very sweet, for a pair of powerful demon-killing-machines…

At one point, the pair stay at a ghost town, and something about the way they dealt with the nightly demons made me think of a sport: They were trying to out-do each other in elaborate ways of killing the corelings (Arlen “wins”, given his greater experience and unusual powers). Renner learns of Arlen’s past, how he got some of his more-unique abilities, and becomes obsessed with acquiring them, as well. Not because she’s power-hungry, but because she promised not to slow him down.

Jardir has continued developing as the Krasian Deliverer, gaining more powers and defences against both demons and human alike. His conquest of humanity continues, as he strengthens his hold on those lands already under his control, and plots his next move. He is ably (though not necessarily honestly) advised by Inevera and Abban, his khaffit merchant friend. Abban, actually, really comes into his own in this novel, and plays a far more prominent role in the various machinations of the story. He’s a great character, one who turns his low station in society into a strength and is not above being ruthless himself, when his needs require it. Or, of course, if he sees profit and opportunity in doing so…

I thought Leesha and Rojer weren’t as strong in this third book as they had been in The Desert Spear. Leesha, especially, was somewhat inconsistent (some of this is understandable, but at other times it felt like she was a different character entirely). Rojer has some interesting and amusing experiences, as he comes to terms with married life and all that entails (only, in his case, doubly so). The Hollow has expanded even more, and this has brought it to the notice of the land’s rulers, who have sent one of their own to oversee the growing community and its use of combat and defensive wards.

Actually, that’s something I noticed and do want to comment on: the use of wards and magic has exploded in the series. So much so that some of the excitement and anticipation for the nightly battles against the corelings has been blunted. There were a couple of times when I thought it was used a bit like a crutch (only a bit, but I think it sapped the story of some of the earlier books’ impact). At the same time, Arlen’s development (and Renna’s) since his battle with a mind demon in The Desert Spear poses a lot of great possibilities for future novels. And one particular power of his becomes very important at the end of this book…

There’s a greater focus on romance, relationships and sex in this novel. This isn’t a bad thing, nor does it have any detriment to the story or flow (except for chapter 20), but it was noticeably more upfront. (Indeed, certain scenes, and especially Arlen and Renna’s relationship, lead me to believe that Peter Brett is secretly more of a softy than we might think…) Part of this is because of the role the dama’ting play in Krasian society, and the fact that Inevera’s story takes us through their training and into their halls. But, it is also because various relationships develop (naturally) as the story progresses.

“When you control a man’s loins in the pillows, you control him,” the dama’ting said, “and you can ensure your own pleasure besides. Most men barely know where to put it, and will simply hump like a dog if given their liberty.”

The Desert Spear introduced a handful of scenes or interludes told from the perspective of a Demon princeling. The Daylight War builds on this, with far more of the story told from the perspective of a demon lord. I really liked this development, actually, and I think it gave a great alternative understanding of events. I’ll be interested to see how this is used in future novels.

While I would have liked some more of Inevera’s backstory, I had the opposite feeling for some other parts of the novel. Mainly in the second half, when I thought certain scenes and chapters (chapter 20, here’s looking at you!) felt drawn out and not as focused as the rest of the novel and the two before. Some tightening would have given the second half of the novel more impact, I feel. However, nothing could blunt the impact of the final page… (Book four is so far away…!)

Should you read The Daylight War? Absolutely.

The Demon Cycle is everything an expansive epic fantasy should be: immersive, utterly addictive, and extremely good. Carve out a lot of time to read this – you won’t want to put it down.

This is a must read series. 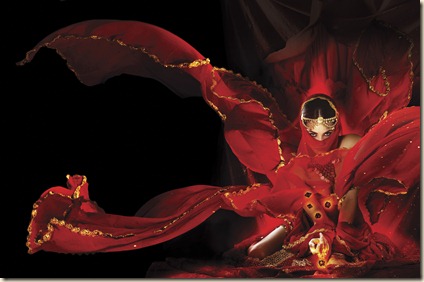 The full US Cover Art (which I prefer, and think is more true to the story) 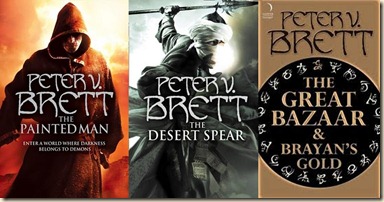