“Somewhere It Snows” by T.C. McCarthy 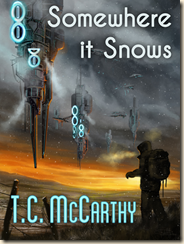 An emotional and thought-provoking science-fiction short

Lev Sandakchiev is old and worn out. An indentured servant to a warrior alien race, he wonders if he’ll survive his last assignment. If he does, Lev has a choice: return to Ukraine – on Earth – or stay in space as the master of his own indentured servants, forever tied to the commerce of destruction...

Somewhere It Snows is an interesting, well-written and stand-alone science-fiction short story from the author of Germline, Exogene and the forthcoming Chimera.

Our protagonist Lev is working for a warlike alien race as a runner and supplier, trying to work up enough service to make it to the “merchant” rank, which will grant him greater status and privilege, and also the possibility to go home to Earth.

It’s a very tantalising short story, due to the themes and information it introduces us to, and also because of the engaging main character. However, because of its length, it is a little difficult to describe or discuss without ruining the story. It has an almost wistful, sad air – it is the story of a man long removed from his home, wondering how, why and if he’ll ever make it back and what it will mean if he could return. It packs quite an emotional, raw punch.

I’d love to read more of this setting, because I think McCarthy is really on to something here. It works wonderfully as a raw snapshot of a hard life in the far future, a future with endless potential for violence and the threat of external invasion and extermination hanging over almost all cultures, species and planets.

As an introduction to McCarthy’s writing style, it’s fantastic, and if you want a taster before trying Germline, then this is a good place to start – if you’re in the US, you could also try his other short stories (published through Orbit), The Legionnaires and The People’s Army, which are not available in the UK [yes, this is a bit of an old, good-natured grumble of mine...].

Somewhere It Snows is available here (UK) and here (US).

Posted by Civilian Reader at 7:14 PM