An Interview with STINA LEICHT 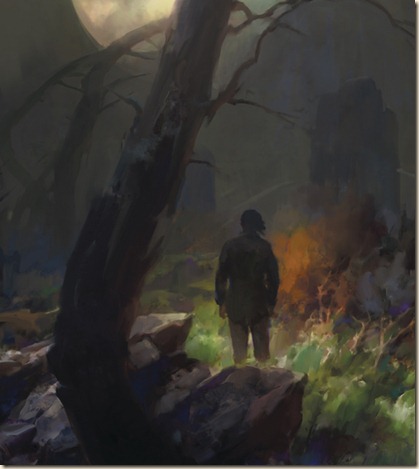 Stina Leicht is an author who has been on my radar for a long time. While her books weren’t readily available in the UK when I was still there, since my extended trip to the US, I’ve been able to pick up both of her novels – Of Blood & Honey and And Blue Skies From Pain, which I intend to read very soon. In the meantime, I thought I’d get in touch with Stina and ask her some questions about writing, reading, and more…

I thought I’d start off this interview with something easy: Who is Stina Leicht?

I’m tempted to give you a Steve Martin quote, but I won’t.

When I was very small I studied monsters. I wanted to know what the silver bullet was in order to protect myself, you see. So, I poured over encyclopaedia entries and conducted research at the library. Understand, my mother dressed me. (Thus, there was no advanced warning for innocent bystanders.) No one knew of my obsession. I didn’t think to tell anyone. One day my fourth grade teacher announced that we were studying Egypt. She made the mistake of asking the class if anyone knew anything related to the topic. My hand shot up. “Oh! I do! I know how mummies are made!” Then I enthusiastically launched into a detailed description of the process – the lengthy ritual, the bitumen-soaked cloth, the organs placed in jars, the iron hook up the nose to scrape the brains out... I was most of the way through when I noticed that the teacher’s face had gone a bit green and the class was very, very silent.

There was a parent-teacher conference after that, because I remember having a long talk with Mom and Dad about my reading material. It wasn’t the last time. 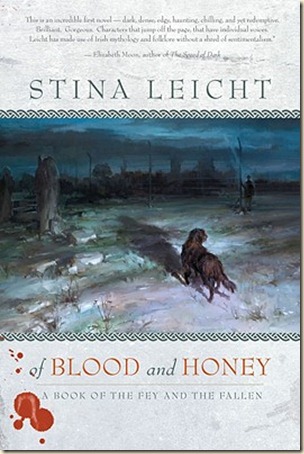 Your first two novels – Of Blood and Honey & And Blue Skies From Pain – are now available through Night Shade Books. How would you introduce the series as a whole to a new reader?

The series is set in 1970s Northern Ireland during the thirty year civil war known as The Troubles. The main character is a Catholic named Liam who thinks his father was a Protestant who ran out on his mother when she became pregnant. In reality, his father is a púca – a shape-shifting fairy best known for their tendency for vengeance. Fairies in Ireland are not the tiny creatures that sit in flowers. They’re more like ghosts, very dark and scary or like our stories of Paul Bunyan. Púcas are the darkest of the dark. Liam’s father, in particular, is a púca named Bran. Bran is also the nephew of the legendary Fionn mac Cumhaill (Finn Mac Cool.) Liam doesn’t know he’s a shapeshifter. Eventually, he gets pulled into the Troubles and eventually becomes a wheelman for an IRA bank robbing unit. And then everything goes really bad. 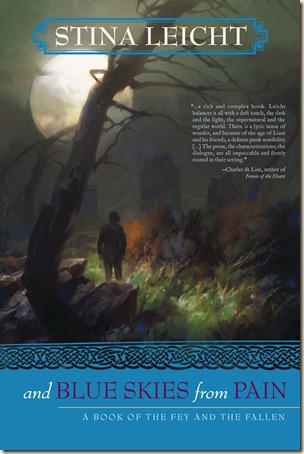 A number of things converged inside my brain. First, I read a non-fiction book called Those Are Real Bullets by Pringle and Jacobson. It’s an eyewitness account of the events that occurred in Derry/Londonderry, Northern Ireland on Bloody Sunday January 30, 1972. Not long after that, I began reading Irish myths and watching films like The Secret of Roan Innish. I saw the Irish seemed to have a close relationship to their mythology – unlike Americans. Then I began to wonder what that might look like in a more modern era. That’s when I got the idea to write an urban fantasy set in 1970s Northern Ireland. I knew it was either going to be really great or possibly the worst idea anyone ever had. As far as I knew, no one had done it before which is strange since it seems so obvious.

Non-fiction, fiction, photographs, film, art, music of all kinds. All of these things inspire me. I like imagining the magical in the mundane. 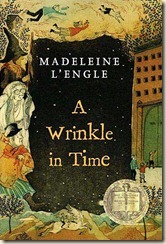 I was attracted to Star Trek, Dark Shadows, The Addams Family, and Johnny Quest right away – like from the time I was four. One of my earliest memories is of asking my babysitter to draw the starship Enterprise and then hanging it next to my bed. (Mom wasn’t too pleased about the tape on the wall.) The first science fiction book I remember reading was A Wrinkle in Time by Madeleine L’Engle. It had a profound affect on me. I’d already read a lot of adventure stories, but sadly, it wasn’t until L’Engle that I discovered girls could have adventures. Since I’d already witnessed Star Trek’s influence – ah, the first inter-racial kiss on US television [below] – I was left with the impression that science fiction was the only genre willing to make room for women. Meg Murray’s mother was a scientist, after all. I had so much hope for the future. Now, I don’t think the battle for equality will ever be over. Anyway, after L’Engle and Star Trek I was totally hooked. I read Joan Aiken and Zilpha Keatley Snyder in addition to Ray Bradbury, Jules Verne, and H.G. Wells. And while I’ve spent a lot of time reading horror, mystery and crime fiction, science fiction and fantasy will always be my first loves. 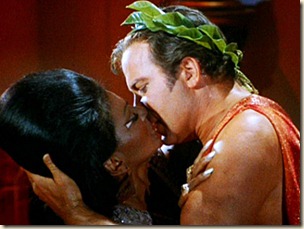 Being a writer is a dream come true. It has it’s frustrations, but I adore it. My husband likes to joke that I’m a “method writer” because I prefer to rely upon personal experience. It’s easier to make characters’ lives more realistic when you can write in key details. You don’t know what those might be until you’ve experienced it yourself. (This is why I took rally racing lessons while writing Of Blood and Honey.) You can’t always rely on direct personal experience, however. So, I also interview those who have had it and sprinkle in any related experiences I might have had. Reading about the subject is also vital, but it can’t be depended upon entirely – particularly when you’re researching a foreign culture. Details get dropped. Things are assumed by those making the record. Also remember that research can get in the way of writing. Therefore, I’ll give a topic an overview and then I start. I don’t stop researching while writing, however. I keep myself immersed as much as I can. That includes music, film, audio books, television from the era (if available), art, and photographs too. 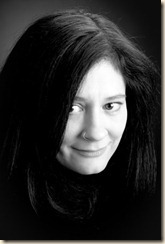 I started my first novel when I was thirteen. It was awful, of course. (You have to suck before you get good. Otherwise, you never learn what doesn’t work and why.) I made sketches of characters, important objects, and scenes. It was very Tolkien influenced, and this freaked out my parents. They went to the family priest. Bless Father Mulvehill. He told them to stop worrying. (He then gave us the entire Narnia series to read.) Nonetheless, I stopped writing when my father insisted it wasn’t possible because I was a female. (He meant well.) So, I gave up and did the things I was expected to do for a time. Then I met Dane. Strangely enough, just like some of the TV shows I’d grown up with (Bewitched and I Dream of Jeannie) everything fell apart when I got married – everything except the marriage. I like to think it was the Universe’s way of telling me it was time to do what I was supposed to be doing.

When I discovered I had cancer I decided that I didn’t want to die without having tried to be a writer. I didn’t care if it actually worked out or not. I was damned well going to try. (For the record, I’m cured and have been for ten years.) From that point on, things started slowly falling into place. I don’t regret the time I spent doing other things. I learned a lot, and writers need a broad range of life experiences to work from. I suspect it’s both why almost all successful writers are older and often have a checkered employment past. I’m not angry with my father, by the way. It turned out that one of the best ways to get me motivated is to tell me I can’t do something. I’m not sure I’d have made it otherwise.

The variety is wonderful. There’s something for everyone. I’d like to see more science fiction on the shelves. It’d be nice to see adult speculative fiction get as much attention as young adult does. (I feel it’s only a matter of time.) Not that I begrudge the young adult market its success. This is where future adult readers will come from, after all, but I do worry sometimes. I feel young adult has the success it does because more creative freedom exists in the young adult fiction market. Ultimately, I don’t know which is more to blame for that – the readers, the publishers, or the economy combined with a greedy corporate culture that squelches creative risk-taking. Frankly, I don’t think blame matters. The good news is, we do have publishers who are willing to take risks. Thank goodness. We really need them.

Where does my work fit? Well, I like to think of it as old skool Urban Fantasy with a thriller/crime twist. I don’t spend much time thinking about it, however. Labels are for bookshelves, not writers.

I’m currently working on a young adult series. I wanted to get something different out into the world, but I also have a few other books brewing that will be set in the Fey and the Fallen series – not only with Liam as the main character, either. Expect to see more story involving the combat nuns and Liam’s little sister Moira.

I just finished reading Scott Lynch’s Red Seas Under Red Skies, and I loved it. I do enjoy a great caper story. Pirates. It’s hard to go wrong with pirates. Also, Adrian McKinty’s The Cold, Cold Ground was amazing. I admire his ability to make the grittiest scenes downright poetic. (Michael Forsythe from the Dead series is one of my favorite characters, by the way.) I’ve started reading Kari Sperring’s latest novel, The Grass King’s Concubine, and it’s wonderful. Her voice is completely different. It’s more quiet and understated, but I enjoy that, too. It takes a skilled hand to paint in subtleties. I recently finished a non-fiction book about the father of forensic medicine too. 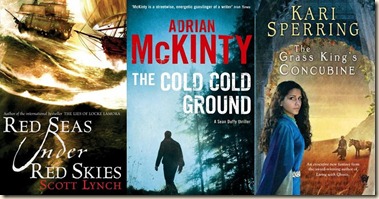 I’m a gear-head. I’ve actually changed the pan seal on an automatic transmission three times. By myself. I even have the burn scars on my knuckles to prove it. Also, I dearly love muscle cars, and my ideal car is a black or red 1968 Mustang Mach 1 CobraJet 429 with a Shaker scoop. [sigh] 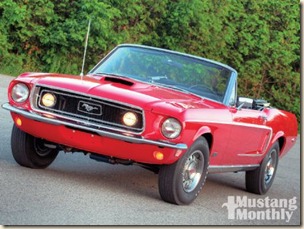 Attending World Con in Chicago. It’s a huge thrill and honor just being nominated for a Campbell Award. The competition this year is pretty tough.