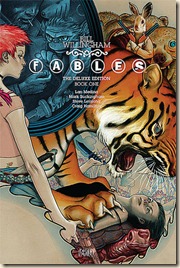 The first two arcs of the superb, award-winning series

When a savage creature known only as the Adversary conquered the fabled lands of legends and fairy tales, all of the infamous inhabitants of folklore were forced into exile. Disguised among the normal citizens of modern-day New York, these magical characters have created their own peaceful and secret society within an exclusive luxury apartment building called Fabletown. When Snow White’s party-girl sister, Rose Red, is apparently murdered, it’s up to Fabletown’s sheriff, the reformed and pardoned Big Bad Wolf, to find the killer. Meanwhile, trouble of a different sort brews at the Fables’ upstate farm where non-human inhabitants are preaching revolution – and threatening Fabletown’s carefully nurtured secrecy.

I’d been on the fence about trying this series for a while – I’d heard great things, but couldn’t decide on whether or not to buy the normal trade paperback collections or the deluxe editions. Alyssa made the decision for me, and got me this book for my birthday. And I am so happy that she did – this is a superb series, and the two story arcs in here are perfect introductions to Willingham’s engaging, inspired and subversive world.

Right off the bat, you know you’re getting something pretty special and inspired, and the book continues to engage, delight, surprise and inspire throughout. There’s really no wonder this has been so very successful.

The first story is a great whodunnit story, only with a very different cast of characters. Bigby Wolf (formerly the Big Bad Wolf) is given the job of finding out what happened to Fabletown’s party girl, Rose Red. Willingham uses the investigative premise to take readers on a tour of Fabletown and introduces us to many of its more colourful and intriguing characters. He manages to pack in so much story into this first arc, that I felt comfortable and at home in the setting very quickly. The characters are nicely drawn (in both senses of the word), and the story is very engaging.

The second story arc takes us to The Farm, an out-of-town haven for non-human Fables, where they can live happily and without fear of discovery or attack. Or so everybody thought. As it turns out, the Fables living there do no consider it a haven, but rather a prison. This leads to an interesting attempt at revolution, complete with allusions to Animal Farm (which is also the name of the story arc) and plenty of language from the Soviet Revolution. It’s alternately amusing, inspired, bizarre, and slightly twisted.

The stories aren’t perfect, as there are a couple of plot/pacing jumps, when things don’t quite progress as smoothly as it could, but they’re not major mistakes, and are forgivable given that this is the first book. (Having read Fairest, I can say that Willingham’s writing improves tremendously, which – given how good this is – should tell you how great Fairest is.)

It amused me that one of the three pigs crashes as Mr Wolf’s pad whenever he comes to town on a bender: a “living symbol” of Wolf’s “lasting redemption” for destroying the pig’s house. The book is littered with literary and fairy-tale jokes and puns, most of which are clever and delightful.

The series has a fantastic premise, written and very well conceived. Willingham and his creative team have done an amazing job of taking some of the most recognisable characters from myth and fairy tale, and making something truly unique and special.

With the increased popularity of fairy tale-inspired media and entertainment (Zenescope’s Grimm Fairy Tales, TV’s Once, and a slew of new Hollywood movies), there’s no reason this series shouldn’t be able to find a huge new audience. If you’re a comics fan, or anyone with an interest in great story telling and the subversion of genre tropes, then Fables is a must. Compared to the other fairy-tale-inspired media, this is awesome on a whole different level, and superior in almost every way.

I’ve already started reading the second Deluxe edition (also a present from Alyssa – I think she wanted an excuse to read them herself…).

Very highly recommended. This could very well become one of my favourite series. 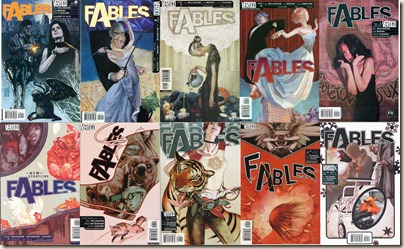 Posted by Civilian Reader at 6:12 PM