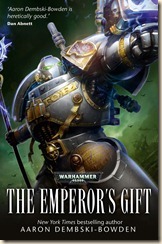 The Knights of Titan go to war

The Grey Knights are all that stands between mankind and the ravages of Chaos. Since their secretive beginnings during the Horus Heresy, these legendary Space Marine daemon hunters have journeyed into the dark realms of the warp – and beyond – in pursuit of their supernatural enemies. Through an intensive regime of psychic training, new recruits are brought to the clandestine fortress of Titan to join the hallowed and vaunted ranks of the 666th Chapter. More than ever, these legendary battle-brothers must be vigilant and ever ready to defend the Imperium for the forces of Chaos are never truly defeated, and Armageddon beckons…

The Emperor’s Gift takes a look at the most secretive Chapter of the Imperium’s Adeptus Astartes, the psychically-gifted Grey Knights. It’s a very different novel to what I was expecting – not in terms of quality, but in terms of content. This, in itself, should not have been a surprise, as the author has a tendency to go in directions we wouldn’t expect, and his novels are among the best Black Library publishes because of it. The Emperor’s Gift is a great, thoughtful and thought-provoking military science-fiction story.

One thing that is obvious from the get-go, is that this is going to be quite different to Dembski-Bowden’s Night Lords novels. For one thing, the Grey Knights are supposed to be the pinnacle of Imperial virtue and purity. The novel is also one of two clear halves: the first sets up the reader with background for Hyperion, our protagonist, and also inducts us into the methodology and ideology of the Grey Knights Chapter. The second half is… well, it’s when the shit hits the fan, to put it bluntly. It’s quite difficult to write about in any detail without spoiling things, so I’m going to keep my discussion of the plot to generalities – I was frequently surprised by the direction the narrative took, and I think other readers should experience the same.

Hyperion is a new Knight, having only recently been elevated to his squad (Castian). Through Hyperion’s introspection and self-analysis we learn of the ‘otherness’ of the Grey Knights – as with the Night Lords, they are super-human, but they stand apart for different and stranger reasons. They are secret, for a start – this was an interesting factor for me. I’m not as well-versed in some of the new canon, so for me much of the information and background for the Grey Knights and their place in the Imperial war machine was fascinating, as I thought it threw up some intriguing propositions about their deployment and how their covert status is maintained (more on that, below).

“Only Adeptus Astartes Chapter Masters could know we walked in the Imperium's shadows. So state the tradition, and so had it been since our Founding. Most Imperial Guard regiments we fought beside were simply executed. Mere men armed with cheap lasrifles were an inexhaustible commodity all too easily replaced in humanity’s empire.”

Hyperion’s squad is attached to Inquisitor Annika’s warband, and together they have been dealing with a planetary leadership’s corruption. The interaction between Hyperion and Annika’s retinue can be amusing, and has the effect of humanising the Grey Knight (who appears rather fascinated by humans), while also highlighting his otherness and inhumanity.

“I listened to their banter, watching in silence, unsure of what to say. Any words I spoke would jar the flow of their conversation, so I opted to say nothing at all. I rarely had the chance to witness humans interacting like this.”

Hyperion is a character of interesting duality, too – he is hyper-self-analytical, self-conscious and unsure at times, yet in battle he can be over-confident, assertive, and reckless. He therefore makes for an interesting guide to this secretive side of the WH40k cannon (the novel is presented as his log and recollections of events).

The first third of the novel has only a little action (a very short, but excellent scene when we’re introduced to the Grey Knights). Instead, the novel builds up to an extended confrontation that lasts for most of the second half. This, I think, is the strength and attraction of this novel and the Grey Knights: they fight very differently to other Space Marines or species in the WH40k universe. There’s an interesting synergy that goes beyond being well-drilled (like the Imperial Guard or Space Marines), and Dembski-Bowden does a great job of bringing the psychic talents of his characters to the fore. I really like the way he’s written the psychic and Chaotic elements of the novel – he doesn’t go over-the-top, for one, which is a pitfall that claims altogether too many authors writing WH/WH40k fiction, instead writing in sparse prose that allows the reader’s imagination to fill in the minute details.

As the novel progresses, and the Grey Knights’ deployment to Armageddon gets underway, we learn of some of the Inquisitions less-acceptable, more extreme containment measures. It’s not pretty, and it’s certainly not noble. In some ways, it’s monstrous. And it is through the Inquisitions orders that we see the existing tensions between the various Imperial forces arrayed at Armageddon snap, and the scene is set for the final act of the novel. As the Captain of Hyperion’s ship mutters,

“Mark my words, gentlemen... This is about to become quite the shitpit of curse words and short tempers.”

I have a feeling some WH40k fans might not like the pacing and comparative lack of action of the first hundred pages of the novel. That’s ok, though. “Bolter-porn” (as it’s known) is not what Dembski-Bowden’s going for. This is an engaging and gripping investigation of the role and life of the Grey Knights. Personally, I thought it was very good. The author writes character-driven military sci-fi, rather than purely action-driven, and I personally prefer that. I would say The Emperor’s Gift is not as good as the Night Lords novels, but I think that’s because Aaron did such an amazing job with Talos and company, and they offered even more opportunity for nuance, conflict (warfare and internal), and complexity. This novel examines the lengths to which inflexible people in power will go to ensure others see their power, and how nobility of purpose can only be stretched so far before the acts you commit to prevent corruption can end up being almost more monstrous.

This is great, thought-provoking military-sci-fi with a difference. Highly recommended.