Some of you may know Paul Cornell through his comics work (Demon Knights, Saucer Country, Stormwatch to name but three of his most recent), but you may not know that he has a novel coming out in December 2012: 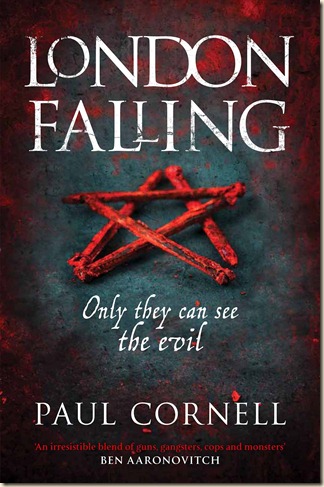 Here’s the synopsis, to further whet your appetite:

Detective Inspector James Quill is about to complete the drugs bust of his career. Then his prize suspect Rob Toshack is murdered in custody. Furious, Quill pursues the investigation, co-opting intelligence analyst Lisa Ross and undercover cops Costain and Sefton. But nothing about Toshack’s murder is normal.

Toshack had struck a bargain with a vindictive entity, whose occult powers kept Toshack one step ahead of the law – until his luck ran out. Now, the team must find a ‘suspect’ who can bend space and time and alter memory itself. And they will kill again.

As the group starts to see London’s ancient magic for themselves, they have two choices: panic or use their new abilities. Then they must hunt a terrifying supernatural force the only way they know how: using police methods, equipment and tactics. But they must all learn the rules of this new game – and quickly. More than their lives will depend on it.

It looks like it should appeal to fans of Ben Aaronovitch, China Mieville, Benedict Jacka, and pretty much any other Urban Fantasy author you could name. I’m rather looking forward to this. Here’s what the aforementioned Ben Aaronovitch has to say about the novel:

“An irresistible blend of guns, gangsters, cops and monsters that grabs you by the eyeballs and never lets go. Start this book early in the day people, because you ain’t going to get no sleep until it’s done.”

Posted by Civilian Reader at 6:25 PM