“Dead in the Water” by Sandy Mitchell (Black Library) 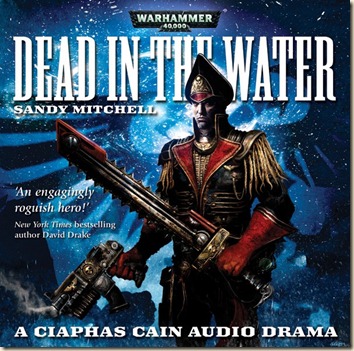 Commissar Ciaphas Cain is a renowned and revered hero of the Imperium, a man who has faced and survived some of the vilest creatures the universe can throw at him. But when he is sent to a river-world, he must deal with a dangerous enemy, an enemy whose true identity remains unknown. As his vessel traverses the straits of the planet, Cain must uncover the face of this new foe so that he can understand and escape it. Caught in the enemy crossfire, the commissar has no place to run, and his nerve will be tested to the very limits.

I’ve been a fan of Sandy Mitchell’s Ciaphas Cain series ever since the first book, For The Emperor, so I wanted to put together just a quick review of this audio-drama. I was interested to see how the character transferred over into this medium, and I have to say I think it worked quite well. The series and character add a refreshing cynical tone to the WH40k setting, and I quite enjoyed this. Not to be missed if you’re a fan of the novels.

Cain and Jurgen, his odious retainer, are looking for a band of lost troopers, while he is attached to a Vostroyan regiment, and must hunt through a warzone to discover the troops’ fate.

There’s a good tension to the story, once Cain and his forces get into the field – especially when they arrive at the Ecclesiarch’s medicae outpost, whose staff and patients have been massacred, and the shrine to the Emperor desecrated. Much to Cain’s disappointment, they strike out, tracking the perpetrators. There’s a good deal of well-done action, and the Nurgle cultists are disgustingly described and brought to (audio) life.

The character’s voice (not to mention the narrator’s portrayal) is great – he has an almost sneering opinion of the rougher elements of Imperial Guard life, and is ever-ready to avoid the discomforts of Guard service. Nevertheless, with one eyebrow raised, he does actually ‘appreciate’ his companions and the troopers he fights alongside. It’s a common comparison, but the aristocratic nature of Cain’s character really does remind me of George MacDonal Fraser’s Flashman.

This is a fun audio-drama. It doesn’t quite pack the same punch that the Horus Heresy stories do, but it is nevertheless entertaining and perfect if you’re looking for a short(ish) slice of military Sci-Fi. I’m looking forward to the next novel (The Last Ditch – which is actually already out, I just haven’t had a chance to read it yet).

Dead in the Water is recommended for all fans of the novel series, as well as anyone looking for a slightly less-serious take on the setting without any negative impact on the quality of the storytelling. The humour is well-deployed, realistic and never goes too far, and certainly doesn’t detract from the action and combat.