The first of the Washington Trilogy

When private detective Dana Cutler is hired by an attorney with powerful political connections, the assignment seems simple enough: follow a pretty college student named Charlotte Walsh and report on where she goes and whom she sees. But then the unexpected happens. One night, Cutler follows Walsh to a secret meeting with Christopher Farrington, the president of the United States. The following morning, Walsh’s dead body shows up and Cutler has to run for her life.

In Oregon, Brad Miller, a junior associate in a huge law firm is working on the appeal of a convicted serial killer. Clarence Little, now on death row, claims he was framed for the murder of a teenager who, at the time of her death, worked for the then governor, Christopher Farrington. Suddenly, a small-time private eye and a fledgling lawyer find themselves in possession of evidence that suggests that someone in the White House is a murderer. Their only problem? Staying alive long enough to prove it.

I’ve been on a political thriller kick recently, and have been scouring the shelves in all my local bookstores for more series and novels to try out. I came across Margolin by accident, but on the strength of this novel, I’m very happy that I did. This thriller is entertaining, twisty, and well written. I enjoyed reading it.

The novel kicks off with a good prologue, giving us hints of what is to come. This takes on the “How did we get to here?” plot structure, basically, but doesn’t give us too much information – and actually throws out a couple of red herrings. The story follows two principle protagonists, with a strong supporting cast. The main two characters are Dana Cutler and Brad Miller.

Miller is a junior associate at one of the largest law firms in Oregon. Despite the fact that he dominates the prologue, Dana Cutler’s perspective takes over the story until Miller is reintroduced in chapter nine. Miller is assigned a pro bono case of a serial killer who is convicted of killing Farrigton’s babysitter from his time as Governor of Oregon. The defendant, a serial murderer on death row, has quite the alibi: he was “disembowelling” someone else at the time, so could not have possibly committed both murders... Miller and a colleague uncover the bodies, and promptly fall squarely into the sights of Miller’s politically-connected boss, who orders him to stop the investigation. Naturally, Miller refuses to do so, and continues investigating on his own time. Which just ends up getting him into more trouble. Then, as information about the Walsh murder comes out, Miller starts making some disturbing connections.

He’s an interesting character – younger than he feels through the text, though, which I thought was strange. He has a disastrous relationship history with his ex-fiancee (the reason he left NY for Portland), which explains why he’s utterly unprepared to deal with a new romance in his life. The eventual love interest was entirely predictable, but Ginny is a good character and their relationship felt pretty real and natural (and I think it’s safe to say that she’s the proactive partner, which was also a nice change) – despite the cliché that a male protagonist has to fall in love with a close female character he interacts with. Luckily, there are two main female characters...

Dana Cutler is your typical tom-boy – she’s into motorbikes and cars, is very tough, and so forth. She is a bit of a thriller cliché, even in her background and personal history, of which we get some over the course of the novel. She is, however, also rather well-written, which makes up for the familiarity in type. Margolin sprinkles a number of cryptic references to a past, brutally painful event at “the farm”, so I’m not sure if this is the first novel by Margolin to feature Cutler. When we finally discover what happened to her, it turned my stomach. It’s a pretty gruesome story, one that goes a long way to explaining Dana’s blunt, cold exterior, not to mention her hair-trigger survival skills. She’s hired on by a mysterious client to do what appears to be a simple surveillance gig. Pretty soon, though, things go rapidly bad, and she must flees for her life, hunted by assassins sent by a very powerful individual.

Dana and Brad eventually pair up with Special Agent Evans of the FBI, who has been leading the DC Ripper case, and together they attempt to get to the bottom of the mystery surrounding two dead teenage girls and their connection to the President.

Christopher Farrington is your archetypal (and, again, sadly cliché), Presidential ideal – he’s from a poor background, went to university on a sports scholarship, then on to law school, and state office (the State Senate and Governor’s mansion), then became vice president. He’s president because of his predecessor’s death. There was something about his story that reminded me of Gerald Ford, actually (with some obvious factual differences).

There is an interesting (to me, at least) element to this novel – despite being written in 2008, there’s very little mention or use of technology, especially the internet (Google is first mentioned and used on p.242/358). It seems almost entirely absent. I found this noticeable but not a bad thing – it means, for example, that the investigation is done with boots on the ground, knocking on doors, interviewing suspects, and not all just through some computer wizardry. This was quite refreshing.

The pacing is very good: Margolin uses events in the first few chapters to acquaint us with the protagonists, with very minor, short blocks of exposition to catch us up on some things (although, I’m not sure if these characters have appeared in previous Margolin novels or not). It’s always well woven into the narrative, too, and never felt clunky. The pacing isn’t as break-neck as Stuart Woods or James Patterson, but that’s no bad thing – this novel feels a lot more substantial, which gave the story a more natural tempo.

The story’s momentum builds as it unfolds, as information and evidence come to light, and Cutler and Miller make progress on their respective assignments and predicaments. There are some nice twists and turns, too, especially towards the end, which added something extra to proceedings.

The political side of the story is well incorporated, too – there’s not too much detail, but it’s there, and not quickly and easily dealt with (as in Mounting Fears by Stuart Woods). I did, however, have a little difficulty accepting that a president (or his chief of staff) would be able to get Secret Service agents and others to act as assassins or other “hired-muscle”. It didn’t bother me over-much, but I did raise an eyebrow at least twice at some of the stuff they were apparently willing to do for their President (it is later explained, I should point out, and it made a lot more sense). Margolin also managed to keep his characters’ speechifying in check and to a minimum, with only the occasional moment of cringe-worthy, cliché sentiment. For example,

“It’s just that... Damn it, I believe in our system of justice. If it’s going to mean anything at all it’s got to work for scum... as well as for the decent people who get in trouble.”

This is a tale of unflinching loyalty, innocence abused, and dogged determination – all make for a very entertaining and engaging thriller. Margolin kept me guessing about how it was all going to end for the majority of the novel (a couple of comments eventually led me to figure out what was going on just before the reveal), and the couple of moments when I worried it might all end easily were quickly dispelled as the author threw out another bit of information to muddy the waters.

Executive Privilege is a flawed novel, there’s no doubt about that (the characters are too close to stereotypes), but it is nevertheless entertaining. I would certainly recommend it to anyone looking for a thriller that mixes politics with murder. It works perfectly within the boundaries of the genre, and should not disappoint.

The next novel in Margolin’s Washington Trilogy is Supreme Justice and the series is completed by the recently-published Capitol Murder (I will read and review both soon). I really enjoyed this, and I think it provides exactly what readers expect and want from a thriller.

I actually read an older edition, with the following cover: 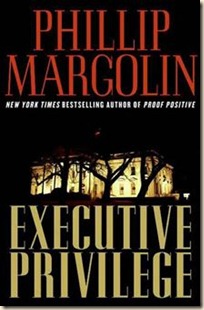