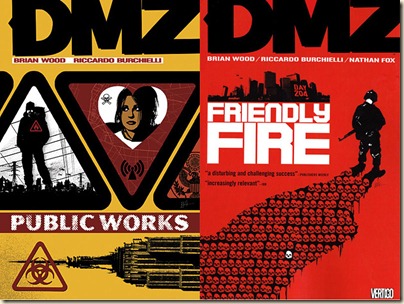 As I’m now starting to make some progress into the series, in an attempt to avoid unnecessary spoilers right off the bat, I thought I’d start grouping my DMZ reviews into two-book-per-review. One thing is clear, though: each of these books is fantastic, and the series continues to be engrossing, nuanced and thought-provoking by equal measures. Still a must-read.

Matty severs his ties to The Liberty News and becomes a free agent. He soon finds himself in over his head as he goes undercover and infiltrates a terrorist cell determined to disrupt any and all construction sites trying to rebuild the city.

I thought I’d start off the review of this book with a quote from Cory Doctorow’s introduction, which I thought was rather good:

“DMZ is a special kind of angry comic, the kind of angry comic that tells the story of the other side in war. Non-combatants aren’t just cannon fodder or collateral damage. We’ve got every bit as much agency, as much control over our destinies, as the guys with the guns and the satellite photos. But you wouldn’t know it from how we’re depicted in the press – instead, we’re the bodies blown apart on street corners... [DMZ is] a wake-up call to stop letting greedy profiteers sell fresh wars to cement their authority and profitability.”

Like most of the introductions to these books, this one took a while to actually get to the point they are trying to make, but Doctorow’s comments above are a pretty good distillation of the feel of the series.

Matty’s latest assignment is Trustwell – a huge, typical contractor who has won the job of re-building the DMZ, or certain parts of it, anyway. Kelly Connolly, Matty’s contact at IWN (and sometime lover) has got him information that will help him get inside Trustwell to learn its secrets and dig deeper into how they operate and what they’re real agenda is. Trustwell is obviously inspired by some of the contracting companies that ran riot in Iraq, but Wood has taken the company’s agenda one step further, with a far more sinister plan at work behind their ‘good-will’ rebuilding of Manhattan.

While Matty is undercover, New York is being wracked by terrorist attacks of many types – it’s the Iraq insurgency transposed onto Manhattan. The story has true-believing fanatics and those willing to twist that fanaticism to political, monetary and other selfish gain. It’s ugly, it’s visceral, and it feels all-too-real and familiar. Matty gets mixed up with a terrorist cell, as a way to learn more about what Trustwell’s up to and also up against. Things do not go as planned, when Matty refuses to stand by and watch innocent lives be further ruined.

The final couple of pages are quite moving and depressing, as one of Matty’s good deeds goes punished...

A superb examination of George W. Bush-era politics and current events, exaggerated and taken to the next level, plumbing the repugnant depths of outsourced national security, relocated to a beloved city, populated by all-too-familiar characters.

Matty Roth reluctantly lands an interview for Liberty News with an enlisted U.S. solider who’s found guilty of a massacre within the DMZ. What follows is a look at how the DMZ came to be, from the perspective of a kid who came from the Midwest and walked right into a nightmare.

This book takes a look at the military command structure of blame and culpability, not to mention punishment, as a massacre of peaceful civilian protestors early in the civil war finally comes to trial. It is the story of “Day 204” – Matty is writing a feature about the military tribunal for the event, and has set up interviews with some of those involved, a military higher-up, and also some of the survivors.

The commentary on warfare could have been ripped straight from 2000-8 headlines, and while quite bluntly and obviously inspired by this time, it works perfectly and Wood has seamlessly transferred the rhetoric onto this new setting. It’s a thoughtful and thought-provoking story, and damned-near perfect.

This is brilliantly written, and brought to grungy life on the page. I am amazed (and also very pleased) that four books and 22 issues in, this series has managed to maintain such a high standard of quality story-telling.

If I had to sum up my thoughts on both of these books, it would be thus: very highly recommended and essential reading.

Posted by Civilian Reader at 1:04 AM