“Save the Date”, a Landmark: ASTONISHING X-MEN #51 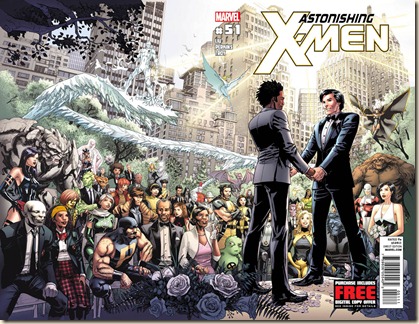 Astonishing X-Men #51 will be released next month, and it promises to be pretty interesting, significant issue: it will include the first gay marriage in Marvel comics – between Northstar and Kyle.

I’ve not been following this series, but it is one I’ve been wanting to read for some time. The first 24 issues were written by Joss Whedon (now collected into two large TPB as well as a fantastic, if pricey, hardcover omnibus), and as far as I’m aware his run, as well as the issues that have followed, have received a good deal of praise from readers.

Northstar was first introduced in Uncanny X-Men #120 (1979), a member of the super hero team Alpha Flight. The French-Canadian “gold medal winning Olympian and successful businessman” hero became one of the most popular members of Alpha Flight when its on-going series launched in 1983. Northstar became the first openly gay super hero when he announced his sexual identity through national media, in Alpha Flight #106 (1992). Since then, he has not only joined the X-Men but become one of their most popular new members. Northstar and his rather-mundanely-named-partner Kyle have been a couple since 2009.

“The story of Northstar and Kyle is universal, and at the core of everything I write: a powerful love between two people who have to fight for it against all odds... This is the quintessential Marvel story, one that blends the modern world with the fantasy of super heroes in order to tell an exciting story that begins with a wedding—and continues in ways you can’t imagine.”

I think this is a pretty cool development for the series, and it will certainly be interesting to see how fans react. Personally, I think this is an important step forward for comics in general, and can only help the cause of equality (even if just a little bit) going forward.

Astonishing X-Men #50 is released tomorrow, and includes the proposal (below): 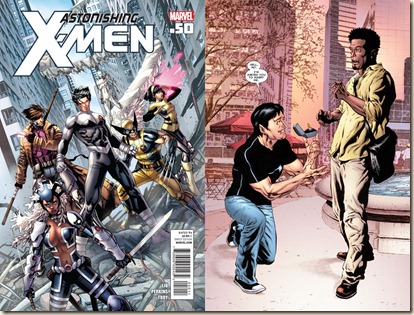 Posted by Civilian Reader at 5:29 PM