Much has been made about comics maestro Mark Waid’s fondness for digital comics and his apparent preference for the new medium – he even went so far as to sell his comics collection to help fund his new THRILLBENT project. There are currently two comics up there, with a third, as-yet-untitled comic coming on May 9th. They’re free to try, so head on over to the site and check out what all the fuss is about. Here are some very preliminary thoughts of mine on the new medium and also the comics themselves.

First off, I really liked the user-friendliness of reading these two comics – just use your computer’s arrow keys to move forward and back in the comic. Simples! In some instances, the panel or page just changes to the next, but for moments when pacing and tension are more important, the panels are revealed in a staggered, cascading manner. It makes a huge difference that these are created with the internet in mind, so you don’t have any of the problems one might find with a comic on ComiXology or Graphicly.

What happens when you’re a crimefighter and your sidekick grows up to be an arrogant, ungrateful douchebag? What on Earth could draw the two of you back together again?

This is a pretty cool comic. Taking some cues from his experience writing the excellent Irredeemable and Incorruptible, Waid re-visits superheroes in another new way – this time, looking at what happens when a sidekick grows up to strike out on his/her own. Unfortunately, unlike some of Batman’s former side-kicks (for example), this former sidekick is an arrogant glory-hound. In this first issue, we see perfectly just how much of an ass he is, taking all the credit for a save that was only partially his (and his contribution was definitely minimal). 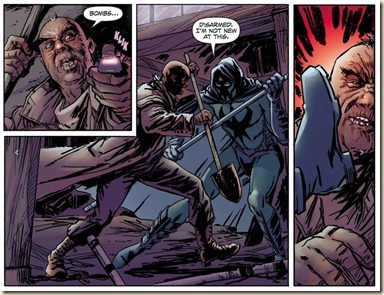 It’s probably a lazy connection to make, but it has a similar tone Irredeemable and Incorruptible but, thus far, is a little more ‘standard’, in that it appears to be focused on masked vigilantes, rather than superheroes like the Plutonian or Max Damage. Krause’s art and Woodward’s colouring are familiarly excellent, too, having both worked on the aforementioned two series.

I’m very much looking forward to seeing how this story plays out. I really liked it. Here’s what Waid has said about the series:

“Originally, Insufferable was meant to be funnier than it is, but bite me, theater majors — comedy is easy, drama is hard. Once I started blocking the series out with my co-creator, Peter Krause, we both felt like we really wanted to be invested in former partners Nocturnus and Galahad, meaning they shouldn’t be cartoon characters. We wanted it to feel like their conflict arose from something genuine and universal, and that meant foregoing some of the snarkiness I initially figured I’d be bringing to the table. There will be funny moments, but there’s pain at the heart of them–that’s where the best humor comes from, after all.”

In a post-Apocalyptic world rife (and ripe) with corpses, who cleans up all the zombie roadkill?

That’s a great premise… And yet another example of Waid thinking of a new spin for an old trope/genre – and one that seems perfectly sensible and ‘obvious’ when we read it, only nobody to my knowledge has ever written about it.

I don’t know if this is going to be an on-going series, given how it ends (which is very sad, and tugged at my heartstrings), but I thought it was a very good, original zombie-apocalypse story. Waid actually got a into a little bit of internet bother over some of the language he used in this comic – more on this, here.