This week I bring you some weird supernatural goings-on, a triumvirate of super-heroes try to save New York City, a vampire slayer goes into space, some anthropomorphised dinosaurs kick butt, the history of the Jedi is expanded on, and an undead king fights an army of pissed off warrior-women. 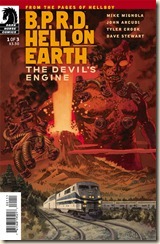 Caught between bat-faced monsters, a devastating earthquake, and the mad science experiments of Zinco, Devon and Fenix form an uneasy alliance in order to get to safety!

This is actually my first ever Hellboy related read – I’ve seen both of the movies (which I really enjoyed), but have never actually read any of the extended comics line. So, I was quite eager to give this a try.

Despite being a #1, it’s clear that some of these characters are already established – this is the 92nd BPRD comic, after all – but there’s enough back-story sprinkled into the mix that I didn’t feel too lost (there are also mini-bios at the start of the comic, which will help locate new readers). This is an intriguing opening chapter – Fenix is troubled by “feelings” of impending danger, but Devon resists, frustrated at his assignment, thinking her nothing more than a kook. As it turns out, however, Fenix is far more in tune with what’s going to happen that Devon first thought.

I enjoyed this – it’s a substantial issue, with lots of story and a great balance between the textual story and visual – the art team does a great job enhancing the story as well as providing some great text-less pages. Overall, it’s a nice visual aesthetic that is not overly stylised, but has a nice level of detail. 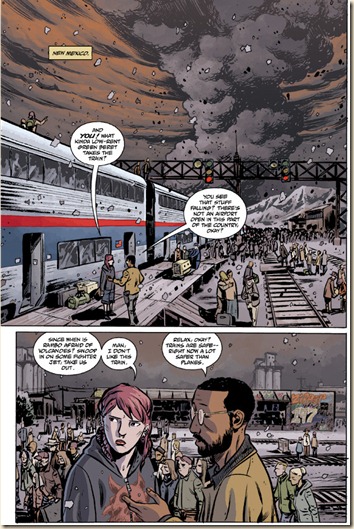 I’m going to have to try out some more BPRD comics and stories – I’ll probably start by hunting down a copy of the first story-arc, and go from there. Recommended. 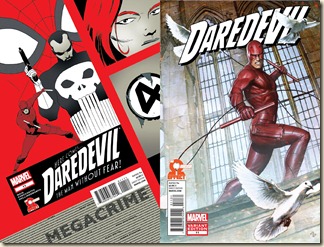 “The Omega Effect” Concludes! Daredevil and Spider-Man join Frank Castle in a blitzkrieg takedown of New York Crime – but don’t take it for granted that these heroes are all working together.

This is the final part of the “Omega Effect” cross-over story, which began in Avenging Spider-Man #6 and The Punisher #10.

Checchetto, who doesn’t usually handle the artwork for Daredevil, but has done all of the art for the Omega Effect, draws the radar sense very well, matching Paolo Rivera and Marcos Martin’s style quite nicely and closely (Rivera & Martin illustrate Mark Waid’s on-going Daredevil series): 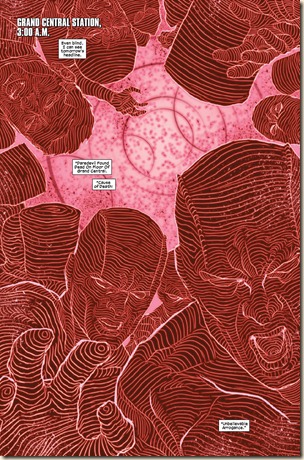 Readers will get an answer for what happened at the end of Punisher #10 (it was a bit vague, I thought). As it turns out, Frank Castle’s ally, Cole, had decided to not follow the agreed-upon-plan and has stolen the Omega Drive, after shooting Daredevil in the back – thereby dropping him into the midst of the horde of criminals (which should also explain the image above). Daredevil then lures Cole away from the action and confronts her about her betrayal, agenda and also her future. More action ensues, as the fight from Grand Central spills over into the streets and catches up with our wayward heroes. I must admit, I wasn’t overly satisfied with the conclusion to the story.

It’s not a bad ending, but there’s no closure to the story, which makes me wonder what, exactly, was the point of the cross-title-story? If it was meant to entice new readers to all three of the series, then… well, ok, I have decided to pick up Avenging Spider-Man because of this (despite it being written by someone else not connected to the Omega Drive story). The importance of the Omega Drive appears to carry on in the Daredevil series (it features prominently on the cover of #14, for example).

This was an interesting diversion, bringing the three characters together quite nicely, despite my ultimate disappointment with how the story ended. 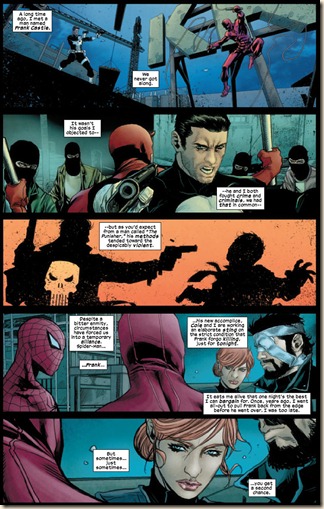 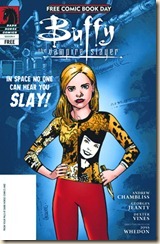 Buffy has never needed a vacation so badly as she does now – with the world overrun with zompires and other fallout from Season 8. Luckily, Spike has got the perfect solution: a “spacecation”!

Having lost their regular real-life meeting place, the Guildies are having a little trouble finding a new location they can all agree on. A little in-game battle becomes the deciding factor, and the circle follows the decree of the winner: the beach?!

I’m not entirely sure whether or not we were meant to take the Buffy story seriously… She’s in space, hunting an Alien (yes, that type of alien), while Spike hangs out with some space termites who think he’s a King… I have no idea what to think.

Same goes for the Guild story, which was just a little silly. Endearing, but silly. 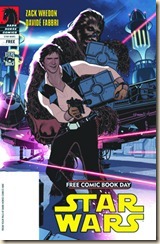 Han Solo and Chewbacca have a falling-out after a deal with a shady customer goes bad. When the client gets designs on the Millennium Falcon, Han and Chewie present a united front that can’t be beat!

“Mal” Reynolds, captain of the outlaw vessel Serenity, is no stranger to jobs gone wrong. But when the chips are down, he’s able to rely on an amazing, odd, and diversely talented crew for help!

The Star Wars tale is a fun diversion, as Han and Chewie get the fuzzy end of a deal, thanks to some truly lame negotiating tactics from Han. Chewie eventually saves the day, of course, and even finds a way to punish Han a little at the end…

Nice to revisit the crew of Serenity, as they make a pit stop on some dusty planet. Mal stays with the ship, and is confronted by what appears to be a traveller who wants passage. Unfortunately, Mal’s not that lucky, and things get a little… tricky.

Seems the theme of this comic is “No, my ship’s not for sale”, as in both someone asks to buy the iconic vessels… 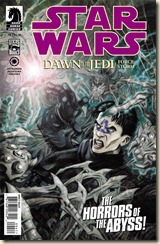 For millennia, the Je’daii Masters have protected the planet Tython and maintained a balance within the Force. But now a stranger from another world has come, destroying the balance and engulfing the world in a Force storm that threatens every inhabitant!

The ancient Je’daii Order stands on the brink of a powerful discovery. But will this knowledge bring wisdom... or peril? Three young Je’daii students may hold the fate of the world in their hands!

The Masters on Tython have a conclave to decide on how best to approach the Force Storm currently effecting the planet and also sending some of their number to search for the younger members of their order. Stuck in a cave, the three young Je’daii students are struggling with the Dark Side energy swirling around them – they are having visions, bouts of madness and rage. At the same time, they are still hunting Xesh, the wayward “Force Hound” of some other warlike race – I still think his background and the nature of his masters could do with a bit more fleshing out, just because I don’t see the relevance. 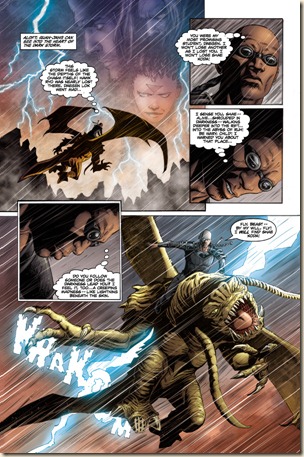 Relationships change as the fight goes on, and we see an interesting mix of comradeship and paranoid suspicion from different sides. We do learn a little more of Xesh’s training and early life, but I still think there’s a lot more ground that needs to be covered. I liked that his arena fights (example, below) from his previous life are used as a parallel for his actions in this issue, building up to a tremendously cold final page. 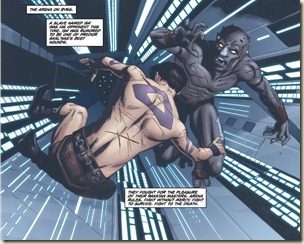 It’s interesting that the younger Je’daii use Force lightning like it’s going out of style, so easily given its connection with the Dark Side of the Force in the movies and fiction.

The series is getting better, but seeing as this is part four of five in this first story arc, I’m not entirely sure where it’s meant to be going. I’m eager to read the next issue, though, and see how the creative team round things off.

More Star Wars in next week’s Comics Round-Up, with the start of a new series: Darth Vader & the Ghost Prison. 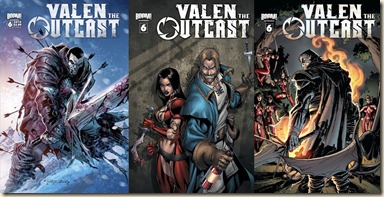 Ok, this issue starts with some pretty surprising and arresting events! After surviving their terribly sea voyage, our trio of heroes is stalked by a “Skulk” – as far as I can tell, this is a company of warrior women who only like men for sport (trans: fighting, war, killing) and breeding. They do not take kindly to Valen, and things go quickly bad for our characters. This story takes a closer look at Zjanna’s past and where she has come from (just as previous issues looked at Cordovan and his past).

This was a fantastic chapter in Valen’s story. It’s tense, has some great action, some tricky politicking and also a couple surprises thrown in for good measure.

The artwork is still great and I really like Scalera’s style. There’s a lot of dynamism in the action scenes (below), but it never gets too over-the-top or exaggerated. The story has the occasional moment of humour (above), and the issue adds to our growing understanding and impression of this world and its occupants. 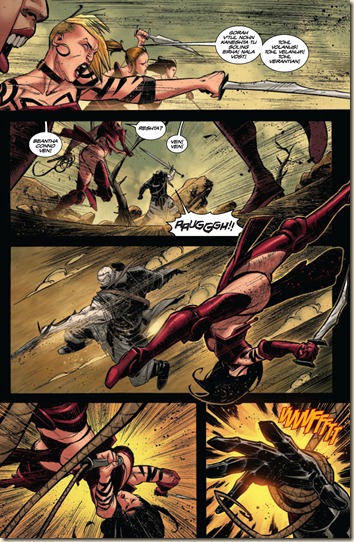 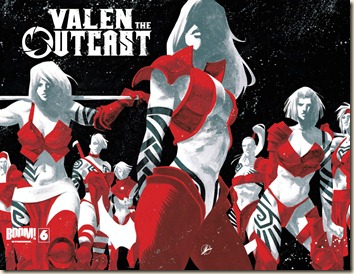 Posted by Civilian Reader at 7:02 PM