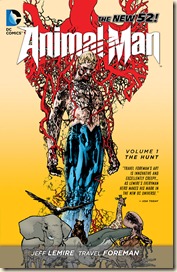 An intriguing, twisted, and bizarre series.

In these tales from issues #1-6 of the new series, Buddy Baker has gone from “super” man to family man – but is he strong enough to hold his family together when Maxine, his young daughter, starts to manifest her own dangerous powers? As these new abilities continue to terrify Buddy and his wife Ellen, things take a turn for the worse as Buddy and Maxine begin a journey into the heart of The Red.

This series received a rather unprecedented amount of praise, when it was first coming out. I wasn't able to find a copy of issue one in stores for a long time and, coupled with my only being newly returned to comics, this just seemed a little too weird for me. Nevertheless, when this collection was finally released, I decided I wanted to know what all the fuss was about. Given what I now know about comics, I can see why this was popular. However, I’m not sure it was really for me, despite some very cool things about it…

There’s a lot to like about this series. For starters, I thought the family life aspect, and how Buddy has to balance the responsibilities of his various persona was a nice addition to the story, adding something you don’t often see in ‘serious’ comics (that I know of). The need to balance his normal parenting concerns with the very bizarre goings-on make for an interesting family, and especially father-daughter dynamic. Things quickly go from ‘normal’ to very weird once Buddy’s daughter exhibits an unnerving ability, which starts the family on a harrowing ordeal, hunted by three horrific agents of the Rot.

Animal Man’s nature and power are also pretty intriguing, and I think the fact that he draws from “the Life Web” to take on aspects of animals has near-limitless potential. Lemire and the artistic team do a great job of showing Buddy’s abilities, but he’s not really given too much room to use them. There are a couple of engagements, true, but they are pretty limited.

Buddy’s daughter, Maxine’s innocence and... well, enthusiasm for the Red and everything she experiences is an interesting and endearing opposite to her father’s caution and hyper-protectiveness.

There’s no doubt that the artwork is distinctive and oftentimes disturbing. It’s an interesting book, in that it alternates between the (relatively) mundane… 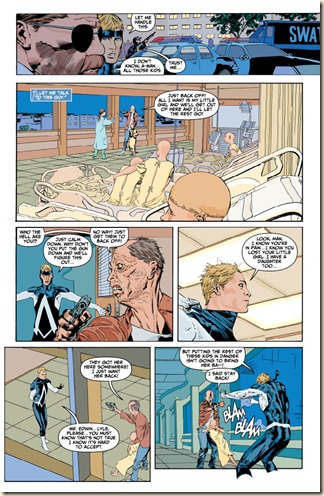 … and the truly bizarre… 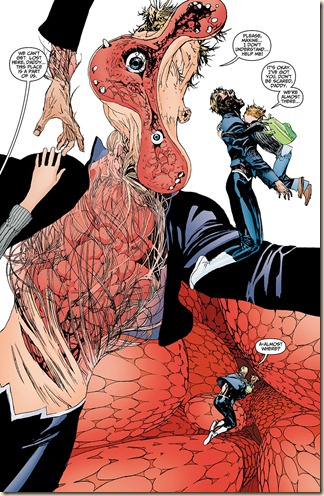 So, you can see, the style of the book is pretty unique. It is also not, unfortunately, for everyone. Myself included – I thought a lot of this story was very good, but ultimately it was a little too weird for my taste. Also, given that this is six issues’ worth of comics, I thought the story wasn’t really moving at any particular pace. We’re introduced to the fact that Buddy’s daughter is special, and has the potential to be far more powerful than he, for either the Red (good) or the Rot (bad), depending on how and by whom she is trained.

As an aside, no father should ever allow his son to wear such a preposterous mullet...

So, in all honesty, this is a little weirder than I usually like my comics. It’s good, but I don’t think it’s quite as great as some reviewers have been saying. Maybe it needs a few more issues before it really gets going? I know the series goes on to have a fair few connections to Swamp Thing (volume one review coming up), but I’m not sure how just yet. 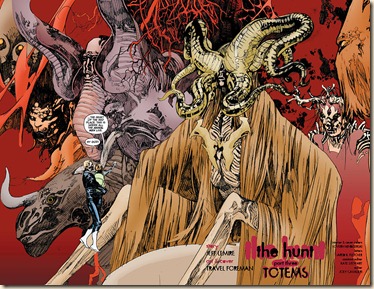 The artwork is distinctive and even brilliant in its own, very twisted and bizarre way (see above). Perhaps I’m just more conventional in my tastes? Perhaps. I may consider buying the second volume when it comes out, but, no matter how much I wanted it to be, at this point this just isn’t for me.

Posted by Civilian Reader at 5:19 AM