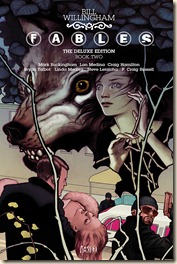 Collecting Issues #11-18 and more. As Snow White recovers from a bullet to the brain, she and Bigby spend a lot of time in each other's company. But when they announce that they’ll be vacationing together, all of Fabletown is shocked. The twosome are about to leave New York City and cross paths with a ruthless enemy lurking in the woods.

In the second deluxe edition of Fables, readers will find six stories – all loosely connected, and all with very different, yet equally inspired, premises. The synopsis above is actually for the third story in the book. I read this book in one sitting and, except for the first story, I think it builds brilliantly on what has come before and reinforces my belief that Fables is an essential graphic novel series for any fan of the medium and also for fans of innovative storytelling as a whole. 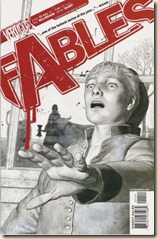 Unfortunately, the first story, “Bag O’ Bones”, wasn’t the best, especially following the excellent previous two arcs. It was, therefore, probably not the wisest way to start this book, but not to worry. It’s has an interesting premise, but it didn’t pack as much punch as what had come before. As it’s adapted from the Mountain Jack Tales (which Willingham states in the title-text), perhaps one can conclude that Willingham should stick to creations more his own. He’s really very talented, but this just fell flat. It felt a little more in line with the raunchier Zenescope Grimm Fairy Tales than the previous two Fables arcs – there’s a real boy-wish-fulfilment element to it, as Jack takes the innocence of a formerly chaste woman and she loves it (crying out during insatiable sex that she wants him to call her “dirty”, etc.). Death was quite amusingly portrayed, though. It’s fine, but by no means essential, and I think could have been a lot better. The second story, “A Sharp Operation” (a two-parter), involves a journalist who thinks the Fabletown community is actually made up of... a bunch of vampires. This is the story of how Bigby Wolf and company solve the problem and squash the story. Briar Rose is integral to the story and the unorthodox solution. It is ingenious, devious, and culminates in an ultimately vicious denouement which I hadn’t seen coming. The story packs quite a punch. As well as a few laughs. The story develops a few of the key characters more, and I was certainly starting to feel like I knew them rather well.

“Storybook Love”, the longest story in the book, is pretty great. It reunites us with a lot of the characters from “Animal Farm” (which formed the second half of the first Deluxe edition), including Snow White and Goldilocks – the latter had fled into hiding after her botched revolution at The Farm. She’s shacked up with Bluebeard, but is found out by a member of the Mouse Police, and she, Bluebeard and his minions put into motion a plan to conceal evidence, brainwash superiors, and do away with the people who could put them in jail for centuries. It’s great fun (though one death early on was really sad), and offers up a desperate hunt through the woods, some duelling, and a couple of pretty brutal, shocking deaths. We see some famous characters acting, well, very out of character, and also the seeds are sown for some future, inevitable conflict. 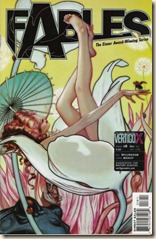 “Barleycorn Brides”: This is the story of the Lilliputians’ part in the war against the Adversary. It’s also about how the Lilliputian expeditionary force that made it through to our world was made entirely of men, which had obvious ramifications for its longevity. This, then, is the story of how the population of Smalltown (as they named their district on The Farm) were able to address their gender imbalance. It involves magic barleycorn, and the legacy of a certain, diminutive Fable. In some respects, it’s actually a tad creepy, but it works within the Fable-framework, and includes daring adventure behind enemy lines, and an eventual happy ending. 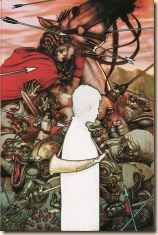 “The Last Castle”: This is a longer tale, still in a single issue (possibly an annual, originally?). It tells the story, as recounted by Boy Blue, of the last Fable stronghold to fall to the forces of the Adversary. It’s a great siege tale, one with a tragic ending, but also a heart-warming appreciation for those who have given their lives so that others might live on. It adds depth to Little Boy Blue, who up until now has just been a peripheral character, playing the role of assistant to Snow White in the Fabletown administrative office. This story establishes him as something more than a mere supporting cast member, and also suggests he will play a bigger role in the overall Fables story as it develops. This was a really great chapter.

The final chapter of the book is “A Wolf in the Fold”, a prose story that tells of how Wolf first met Snow White and Rose Red (as alluded to in “Storybook Love”), what Wolf was up to in the early years of the Adversary’s conquests, and also how he came to Fabletown and become Bigby Wolf, the Fable community’s sheriff. I really liked the story, as it offers a nice addition to our overall picture of two central characters and some of the events that have shaped their current ideology, position and connection. It also shows that Willingham is as deft writing prose as he is comic scripts.

Once again, this book is filled with delightful variations and spins on fairy tale characters famous, infamous and obscure. Willingham and company really have created something special, and I’m hooked (I’ve already read the next Deluxe book – which I started immediately after finishing this one – so expect a review of that very soon). The flying monkey, Bufkin, who is one of Snow White’s administrative assistants, is brilliant and makes me laugh nearly every time he’s on the page.