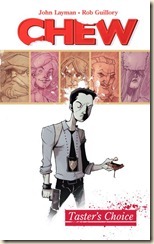 Tony Chu is a detective with a secret. A weird secret. Tony Chu is Cibopathic, which means he gets psychic impressions from whatever he eats. It also means he's a hell of a detective, as long as he doesn't mind nibbling on the corpse of a murder victim to figure out whodunit, and why. He’s been brought on by the Special Crimes Division of the FDA, the most powerful law enforcement agency on the planet, to investigate their strangest, sickest, and most bizarre cases.

This series is so delightfully weird! Chew is zany and tongue-in-cheek, with a brilliant, bizarre premise. Detective Tony Chu is a “cibopath” (see image below for explanation of how this effects his diet). One night, he goes for an illicit chicken dinner, only to stumble onto the trail of a serial killer. What follows is his transformation from simple detective to FDA Special Crimes Investigator extraordinaire. If you want a comic that breaks boundaries and is funny and disturbing in almost equal measure, then I would definitely recommend you give Chew a read. 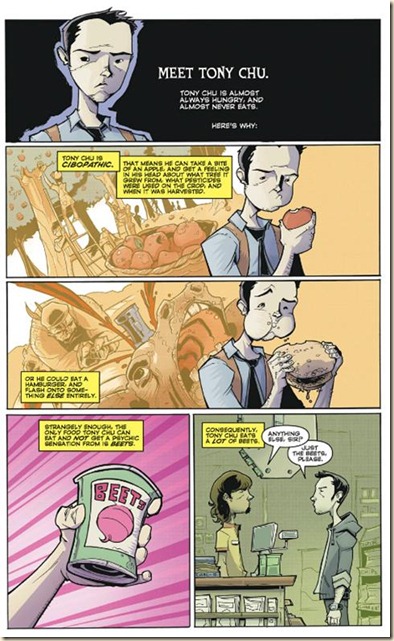 He looks so… sad about the beets…
This is still one of my favourite comic pages ever.

Because of bird flu, which killed tens of millions of people in the USA, chicken is now outlawed. But people like eating chicken, so there’s a new, burgeoning black market in chicken products with prohibition-style chicken eateries. As with everything illegal, America’s criminal elements are quick to establish themselves in that market, and with them comes a whole range of other problems and crimes – murder, theft, extortion, and so many more interesting and inspired ways to commit a crime in a world of illicit chicken dinners.

Chu is hired on by the FDA, after he uses his cibopathic abilities to track down the serial killer in the first chapter. (It’s probably best to leave it to readers to discover how he tracks the killer down…) And so he sets off on a new life of weird-as-shit cases accompanied by his larger-than-life partner, the fat man with mad ninja skills, Mason. They go to the Arctic Circle (there’s a llama involved), they confront a “saboscrivner” whose restaurant reviews are so evocative that they can literally make you taste what’s being described (for good and ill effects…), and Chu has to put up with a boss who despises him so very much. 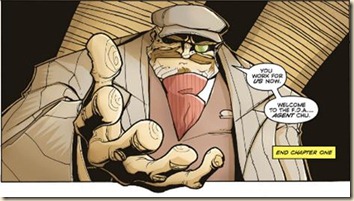 It’s really very fun – I chuckled, laughed and snorted plenty of times, and the artwork manages to enhance the absurdity of the story, Chu’s special skills and the cases he works on. It’s also shrewdly observed: there are annoying, “politically aware” teenagers with “attitude”, government bureaucratic absurdity and over-reach, and the grimiest traits of humanity are all laid bare for the reader.

The story gets a little more serious in tone as we work through the book (although, there are still so many “WTF?!?” moments and delightfully twisted, artistic touches in the background), as Tony and Mason dig deeper into the case of a murdered food inspector from Brooklyn.

Highly recommended if you want something that is definitely outside of the box, amusing, highly original and (most importantly) well written and realised. 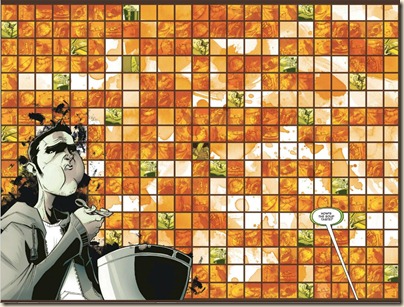 I’ll definitely be reading more of this series in the future (I have volume two ready and waiting to be read…). I just wish I’d figured out how much I liked it sooner, so I could have bought the Omnivore Edition, which collects the first two volumes of the series. If I enjoy the second book as much as this first one (which I imagine I will), I will consider buying the second Omnivore Edition book – collecting volumes three and four. 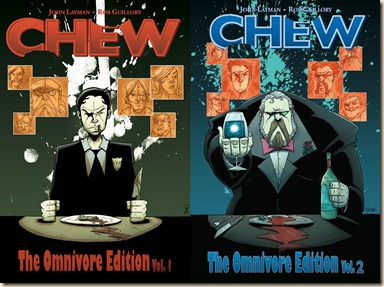 Posted by Civilian Reader at 2:34 AM