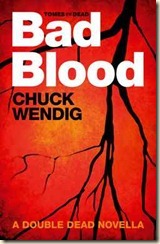 The novella sequel to Double Dead

San Francisco after the zombie apocalypse.

Vampire-predator turned human-protector Coburn is on the trail his his vampire sire. When he finds him, it is not to catch up on the good times, but to take revenge.

Alcatraz. Super-zombies. A ketamine-trip cult of New Age weirdos who eat the flesh of the zombie as some kind of grotesque communion.

In this second instalment of his Double Dead series, Wendig has done it again – he has written a darkly humorous, action-packed horror romp. It fast-paced, witty, eloquent and engaging. Just more evidence that Mr Wendig is an author everyone should read.

[Warning: There are some minor spoilers for the previous novel in the series, Double Dead.]

As the story opens, Coburn and Gil are in San Francisco, and in the middle of a zombie-attack. Coburn has been injured in the ambush, so our pair of heroes decide to split up – Gil is supposed to head to “the lab” while Coburn seeks out (relatively) fresh blood to heal his wounds. Both find their plans disrupted by more traps and hazards, not to mention awkward and potentially-deadly run-ins with the locals, living and undead.

I really love the way Wendig writes characters: they are very real and even endearing in their way, never feeling contrived and always displaying a slight twist to standard character types and tropes. Even Coburn, the vampire who thinks of humans as little more than happy meals on legs, feels real. A real asshole, true, but real nonetheless. That being said, the events at the end of Double Dead have had a lasting, positive impact on his character. He’s less critical of humans, for a start, and his outlook on life is just a shade sunnier (perhaps a result of his newfound ability to walk in the sun…).

“Creampuff” remains a delightfully silly name for the pet of a vampire, even if he is a rat terrier. He also provides some of the more amusing moments in the novel. As with all of his characters, Wendig has imbued the dog with a lot of personality.

Kayla’s influence on Coburn is pretty strong and, at times, manages to soften the vampire. But only slightly – when he’s blood-starved, there’s little that can keep his impetuousness in check. He remains reckless and almost a slave to his baser, more animal urges (food), but Kayla’s innocence and good nature is bleeding through. You see, she’s riding shotgun in his head. It’s a weird development, but he kinda likes it, for the most part. Having taken up residence in his subconscious, though, she’s dredging up painful memories for Coburn, which circumstances don’t help (sorry to be cryptic, but I don’t want to spoil some of the surprises).

The writing is superb and very tight, as is the story’s plot. It’s visceral and pared back, and didn’t have any moments that felt self-indulgent or over-the-top. The author has definitely improved since Double Dead, which was already an expertly crafted novel.

Action-packed and fast-paced, Wendig really puts Coburn through the meat grinder in this story. He is assaulted from almost every side throughout the story, as he pinballs from one hazard to the next. He comes face-to-face with hordes of zombies, another super-zombie “hunter”, a weird death-worshipping cult who have disturbing designs on our undead hero, a group of barely-surviving “apocalypse children”, and a deadly acquaintance from the distant past.

Bad Blood is another superb example of zombie-apocalypse fiction done right. If you have any interest in SF/F/H, then you should be reading Wendig’s fiction. Pure and simple. I’ll be reading Blackbirds next of his, pretty soon. This is irreverent, darkly funny, and playfully twists a few genre tropes, while retaining an obvious fondness for them.

If I had just one complaint? I wish it had been longer.

Posted by Civilian Reader at 6:23 PM