“The Killing Moon” by N.K.Jemisin (Orbit) 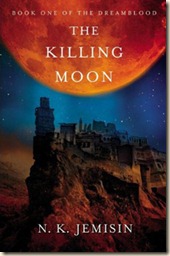 The start of a new fantasy duology

The city burned beneath the Dreaming Moon.

In the ancient city-state of Gujaareh, peace is the only law. Upon its rooftops and amongst the shadows of its cobbled streets wait the Gatherers — the keepers of this peace. Priests of the dream-goddess, their duty is to harvest the magic of the sleeping mind and use it to heal, soothe… and kill those judged corrupt.

But when a conspiracy blooms within Gujaareh’s great temple, Ehiru — the most famous of the city’s Gatherers — must question everything he knows. Someone, or something, is murdering dreamers in the goddess’ name, stalking its prey both in Gujaareh’s alleys and the realm of dreams. Ehiru must now protect the woman he was sent to kill — or watch the city be devoured by war and forbidden magic.

In The Killing Moon, we are introduced to a new world from the author of The Hundred-Thousand Kingdoms. The first half of the Dreamblood Series, the novel builds an engaging, atmospheric and fantastical world. This exceeded my already-high expectations. It’s a beautifully written novel.

The novel follows three primary perspectives – that of Ehiru, Nijiri and Sunandi – each providing different impressions and interpretations of the political, social and religious conflicts and events that take place. Something is killing people in their sleep. The Prince of Gujaareh has been forming alliances with other regions and peoples of the world. Sunandi, a visiting ambassador, believes that the intention is to wage a war against Kisua, but she needs more information. And then she needs to stop the war from happening.

The story opens with Ehiru, a Gatherer of the Hetawah. He’s on a mission, but something goes wrong, and his mistake leads him to a crisis of faith.

The chapter is a brilliant, atmospheric introduction to one of the lead protagonists of the story, as well as the city and its religion and law. Out of the three main characters, I thought Ehiru was the most-developed and engaging – he’s the most famous Gatherer, and the most gifted, and therefore his crisis of faith and subsequent discoveries have greater impact.

Nijiri, Ehiru’s newly-appointed apprentice-gatherer, reveres his mentor, and through his eyes we see not only some of the conflicts Ehiru must work through, but also a different perspective on the Hetawah and its laws. Nijiri’s respect for Ehiru goes further than just mentor-apprentice, and a couple of his decisions will have huge impact on the story. He’s not the most developed character in the book, definitely taking a back seat to Ehiru and Sunandi, but I’m hoping he’ll be better fleshed-out in the second book, The Shadowed Sun.

The other main perspective is the aforementioned Sunandi, a visiting Kisuati Speaker (ambassador and spy), who has inadvertently uncovered the conspiracy at the heart of Gujaareh, and information about the Prince’s plans. Sunandi is accused of spying by the Prince, and Ehiru is tasked with her Gathering, which goes against Ehiru’s understanding of Henanja’s laws.

“Our focus is spiritual, not political... If the Sunset [Prince] wants her killed, he has assassins for that.”

The world Jemisin has created is superb. Everything from the cities to the people are wonderfully realised. The belief and magic systems are particularly interesting – “Gathering”, and the “dreamblood” they collect from it, are great inventions, and Jemisin has managed to make the practice fascinating and horrific in equal measure. The story explains how it is a blessing, but one that is sometimes manipulated and twisted for impure, selfish ends. The process of Gathering seems to turn the Gatherers into addicts, too, which I thought was very interesting – I’m not sure if this is a wink at Karl Marx’s dictum, that “religion is the opium of the people”. Ehiru basically goes through withdrawal symptoms on the journey to Kisua, finally giving in to temptation and corruption when they are set upon by their pursuers – the way his emotions are written when he Gathers for the first time after a long break is exactly what I would expect from a junkie taking a long-delayed, powerful hit.

The Killing Moon is filled with temple and palace politics, espionage, and conspiracy. It examines the impact of politics and selfish ambition on religion, and religious influence on politics and society, and how both of these in turn affect true believers caught in the middle. There are a lot of fantastic layers to the world, and Jemisin does a great job of weaving the world-building into the story, using only a very few interludes to add more layers to the world, mythology and society. It’s a wonderful and engaging exercise in world-building. The author’s note at the beginning mentions a clear Egyptian influence, but I thought Jemisin has done a great job of making the culture unique and very much her own. It’s a great, impressive world she’s created.

As we have come to expect, Jemisin’s prose is fantastic – her writing never fails to grab me and pull me through the story. I can’t wait for book two. Luckily, it’s out in June!

Highly recommended for anyone looking for a thoughtful, thought-provoking fantasy in a beautifully evoked, atmospheric world.