Ok, I feel like reading something a little “older” than usual. CR has focused predominantly on newer titles – partly because I am myself relatively new to reading genre fiction – but there are hundreds of novels that were released before I really started paying attention to the fantasy and sci-fi genres at large. There are a few in particular that have caught my eye, and while they are not necessarily old by, say, Tolkien or even Gemmell standards, they’ve nevertheless been around for a fair while. (Actually, speaking of Gemmell, I should try Legend at some point, too…)

I’ve narrowed the choices for the next round of Latecomer reviews down to three titles, and I’d like you to help me choose which to read and review first. Here are the choices: 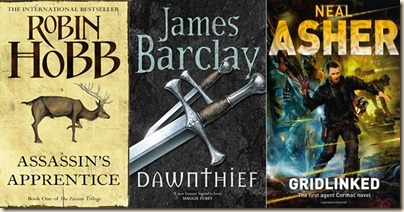 Which one should I read first, and why? I’ll probably go with the one that gets the most recommendations, unless someone writes a particularly compelling reason to read another.